For some Blazers, foreign disasters hit close to home

They wondered vaguely how the living room would look submerged under two feet of water, or if the house would still be standing at all. They thought briefly of what the city might look like when they finally returned – whether it would still be standing or reduced to rubble and debris. And after one long, hard look to fix the image of their home in their minds, they steeled themselves to board the bus that would take them to a shelter safe from Hurricane Noel. In this way, sophomore Angela Nunez's extended family in the Dominican Republic – her grandparents, uncles, aunts and cousins – left the only home they had ever known.

For Blazers like Nunez, tragic disasters around the world, from political turmoil in Pakistan to hurricanes in the Dominican Republic, are more than just images of destruction and grief that stray no further than the television screen. Forced to rely on the sometimes-skewed American media for limited coverage of disasters that their families experience firsthand, students with families abroad in regions of strife and turmoil must deal with the pain and dangers their families suffer through.

According to Dr. Anne Balboni, a psychologist at the International Critical Incident Stress Foundation, for these teens, the situation can lead to anxiety and emotions that are difficult to cope with. "There's continual worry. The teen wonders whether or not the family is okay; if they are, then are they going to be safe tomorrow, or can something else happen? There is a need to worry, because [the situation] is constantly there," she says. 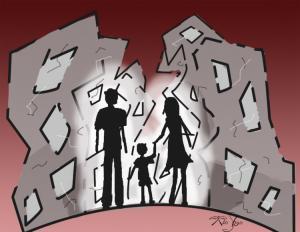 Senior Mohsin Ghazali, who originates from Pakistan and has family in the country's capital of Karachi, has to cope with the unpredictable but ever-present threat of political strife. "One moment it's fine, and then it might be totally different," Ghazali says. Because of the risks of political involvement in Pakistan, Ghazali's family living in Pakistan – his mother, grandparents and various uncles, aunts and cousins – have remained politically neutral for many years. "Since the beginning, getting involved [in politics] is just taking a chance," he says.

For Nunez's family, the danger was not constantly looming over their shoulders. At the onset of Hurricane Noel in late October 2007, the Dominican Republic's National Meteorology Center issued flood and landslide warning for many areas of the country, especially the coastal regions, including San Cristobal, where Nunez's family resided. Despite the warning, the hurricane's advance shocked Nunez's family. "[The Dominican Republic] is a tropical place, but hurricanes haven't happened in a while," Nunez says.

The Ghazalis didn't find Pakistan's spiral into violence over the assassination of the country's former Prime Minister Benazir Bhutto on Dec. 27 particularly shocking, as the country has long been in a state of strife. Because of their foresight and precautions the Ghazali family remains safe, as Bhutto's assassination ignited passion and threw Pakistan into violence and disarray. Bhutto's death came only two weeks after President Perez Musharraf ended his imposed emergency rule, when tensions in Karachi had just begun to improve.

Musharraf's emergency rule, which he enacted on Nov. 3 to regain power he was losing to the Pakistan Supreme Court, triggered passionate reactions from many of Karachi's citizens, leading to dozens of riots and protests that turned violent in the streets of Pakistan. "[Rioters] burned tires on roads, and they had complete strikes, where there are no businesses on that day," says Ghazali, speaking of the conditions that his mother described over the phone. Throughout the violence that rose after both Musharraf's declaration and Bhutto's death, Ghazali's family in Pakistan stayed home whenever possible to avoid the fury rampant in Karachi, leaving only when necessary.

In the Dominican Republic, safety measures were not as simple as shutting the front door. After the flood warnings were issued, Nunez's entire family uprooted – they reluctantly packed their most precious belongings, family mementos and jewelry. With each person carrying one bag's worth of his belongings, the family boarded a bus and traveled to a shelter two hours away. "They didn't want to leave because they knew when they came back the house would be gone," Nunez says.

Both the Nunez and Ghazali families found safety and waited out the turmoil and destruction that tore through their countries. Nunez's family took refuge at the shelter with their friends and neighbors as Noel raged and swept across the island, killing at least 89 people, leaving 42 missing in floods and causing millions of dollars in damages, according to Reuters.

But after the turbulent winds of Noel died down, the effects of the hurricane proved to be staggering. The immensity of the destruction shocked Nunez's family, despite the advance warning. "We never thought it would happen," she says. The entire Dominican Republic flooded, causing massive power outages, ruining fields of crops and displacing thousands of people. Although the hurricane swept through quickly, even now many people still remain at overcrowded shelters.

Having waited out the anger and vehemence that followed Bhutto's death, Ghazali and his family found grief in the death of the former prime minister and disappointment in the current state of Pakistan. "It's a sin that our former prime minister was assassinated in the middle of our country," says Ghazali. "Citizens are killing their own people, just for politics."

Ghazali says that conditions improved rapidly two weeks after the assassination. "It's getting back to normal," he says. Some are still reacting violently and rioting, but for the most part conditions are calming down, and Pakistan seems to be returning to peace again.

For those in the Dominican Republic, Hurricane Noel has passed and quiet has returned, but the work has just begun. Although the Nunez family has yet to return to where their home once stood, they know that they must rebuild before they can return to their regular lives. "All they're doing now is praying that the house wasn't completely destroyed so that the reconstruction effort will not have to start from scratch," Nunez says. Despite news reports, she cannot even begin to imagine the changes and destruction, and knows that the Dominican Republic will never be the same as that of her memories.

With her family calling regularly from the shelter to keep their kin in the United States updated on their lives, Nunez watched the news for signs of Hurricane Noel in the Dominican Republic. Yet to Nunez's shock, the U.S. media left the hurricane virtually untouched. "A major part of the country was hit; it wasn't small. It should have been covered," she says.

The only media coverage of Hurricane Noel that Nunez noted was on the Hispanic Channel, and the lack of attention left Nunez indignant and annoyed. "There was nothing on the destruction, or the rebuilding now. It was like the U.S. didn't care what was going on outside the country," she says.

Ghazali, too, found his bones to pick with the American media. The Pakistani atmosphere after the Bhutto assassination was tense and violence was rampant – but not to the extreme that the American media portrayed, he says. Three days after the Bhutto assassination, most citizens were too scared and violence ceased, according to Ghazali. "The media showed only a few parts, not the whole story," he says.

According to Balboni, the dependency on media portrayal of disasters can lead to further stress and difficult emotions. "The news media often gives conflicting reports. The lack of accurate information when something like an earthquake happens can cause a great deal of confusion, and a reflection of emotion that becomes hard to deal with," she says, citing conflicting death tolls as an example.

In Pakistan's case, the media chose to focus on those who overreacted, portraying the country under a dark and violent shadow. "They basically covered the extremists," Ghazali says. The selective coverage of Pakistan gives outsiders and other countries a slanted – dark and violent – portrayal of Pakistan. There is a whole other side of the country, Ghazali says, in the people who haven't overreacted that the media has ignored.

The strife of Pakistan traveled thousands of miles to bring Ghazali grief for his home country. For Nunez, the Dominican Republic that the U.S. media ignored was more than just a tragedy with death rates. "This was my family," she says. "Everyone was in a good place in their lives, and we were so worried that they wouldn't be able to find that place again."