Sitting in a third-grade classroom in India eight years ago, junior Srinivas Vasudevan watched two children as they were forced to squat in front of the class and shake their feet from side to side while pulling on each other's earlobes. Vasudevan's teacher was punishing the students for stealing his pencil sharpener. Not only was this humiliating treatment a form of physical punishment, but also a form of demeaning degradation, which has been shown to leave emotional scars. 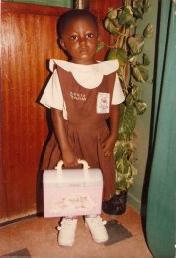 Although many students in the United States cannot imagine being physically punished for misbehaving, Vasudevan's story is not unique, even in America. Maryland banned corporal punishment, or physical punishment, in 1993, but is only one of 29 states to do so, according to the National Coalition to Abolish Corporal Punishment in Schools web site. School officials worldwide use corporal punishment to maintain order and punish poor academic performance on a daily basis, according to the Human Rights Watch web site. Blair students who come from foreign schools where such punishment is common face adapting to a new culture while leaving behind strict and oftentimes emotionally scarring discipline.

Until she moved to the United States in 2002, senior Doris Tawiah attended a public school in Takoradi, the third-largest city in Ghana, where corporal punishment was common. Tawiah says students were motivated to learn because of the strict environment. "In school, everybody tried their best because nobody wanted to get beaten," Tawiah explains. "If the teacher felt you weren't doing your best, they'd beat you with a cane."

Freshman Mala Singh observed similar punishments in Trinidad's public schools for reasons such as wearing the wrong school uniform or not completing homework. "If you do something wrong, the teachers either slap or beat you with a ruler on your hand or anywhere," she says.

In China, teachers used violent threats as well as physical punishment to motivate and scare students into obedience, according to senior Ginny Lee, who attended school in the Guangdong Province. When Lee was five or six years old, she saw a teacher aggressively threaten a student with a pocket knife. "The kid wasn't paying attention so the teacher took a pocket knife and was holding the student's ear and like threatening to cut if off or something," Lee says with shock. "Everyone was silent and just looking at it." 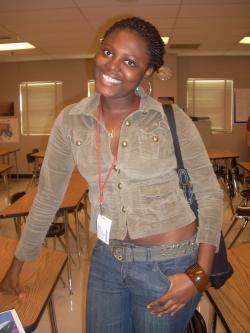 In addition to discipline from teachers, upperclassmen in some countries also took it upon themselves to keep younger children in line. Sophomore Chonnipa Hongjaisee, who moved from Thailand in 2005, recalls that older students commonly abused freshmen in high school. "In Thailand, the freshmen have to be really respectful to the seniors or they were punished by the seniors," Hongjaisee says with wide eyes.

Students have been expelled for bullying, but usually administrators have a hard time getting victims to admit they were bullied, according to Hongjaisee. "They're scared that if they speak out they'll be punished another time," she says. "I have a friend who acted badly so the seniors beat him up. But when the administrator asked, he just said he fell down the stairs."

Some students who grow up observing and experiencing physical punishment may come to accept this kind of discipline, but may feel strong mental after effects.

Professionals and victims find that physical punishment can cause more than temporary pain, as punitive measures may harm students' mental well-being and self-esteem. Christine Yeh, an Associate Professor from the Counseling Psychology Department at the University of San Francisco, researches cross-cultural issues related to counseling psychology. Yeh believes that because of the prominent role school plays in a young adult's life, corporal chastisement can leave a lasting impression and be emotionally detrimental. "Children and teens spend the majority of their time in school," she says. "It's a major socializing factor. It's not just about what you're learning academically."

Yeh points out that repeated abusive reprimands can actually cause students to withdraw from school, feel uncomfortable and even rebel against society — proof that mental after-effects of physical punishment last longer than the pain of the punishment itself. Singh is just one child who felt the mental wounds of the fear instilled by inhumane disciplinary techniques. "It made me shy because you were scared to say something wrong," Singh says. "There was a fear." 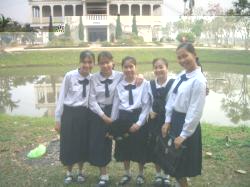 Photo: Sophomore Chonnipa Hongjaisee stands at the far left with a group of friends from Thailand in seventh grade. In her school, the girls were required to wear knee-length or longer skirts, white socks and blue ribbons to tie up their hair. They were also forbidden from wearing jewelry. Photo courtesy of Chonnipa Hongjaisee.

Photo: Sophomore Chonnipa Hongjaisee stands at the far left with a group of friends from Thailand in seventh grade. In her school, the girls were required to wear knee-length or longer skirts, white socks and blue ribbons to tie up their hair. They were also forbidden from wearing jewelry. Photo courtesy of Chonnipa Hongjaisee.

Psychiatrist Gustavo Goldstein, member of the American Academy of Child and Adolescent Psychiatry, explains how ridicule can be even more disastrous for children than the physical punishment itself. "There is nothing more important to a growing child than how his peers look upon him," he says. "More than the physical punishment itself, sometimes the psychological and emotional issues would have to be a cause of concern."

Vasudevan feels that his teacher's punishment for his fellow classmates was meant to be cruelly humiliating. "It was kind of scary because you could see the teacher laughing and the kids were crying," he says. "She was encouraging us to laugh too."

It was clear to Vasudevan that his teacher did not give his peers any respect. In the United States, the situation is reversed, and many foreign students wonder whether education and teachers are valued enough.

Leaving behind the harsh retribution of schools in their native countries, immigrant students are shocked by drastically different student-teacher relationships in the United States. While education and teachers are viewed with more respect in several other countries, the United States seems to have fallen a bit short, according to Goldstein. He says the United States only pretends to care about education. "America has consistently been rated at the bottom of civilized countries in the role of education," he claims. "Everybody will pay lip service to education but no one will support it."

Upon entering seventh grade at Silver Spring International Middle School, Tawiah experienced America's "lip service" and reduced rigidity in the classroom. "When my teacher asked me questions in my first class, I stood up and answered the questions because that's what you do in Ghana, but all the students started laughing at me and the teacher told me it was okay to sit down when I answered questions," Tawiah recollects. 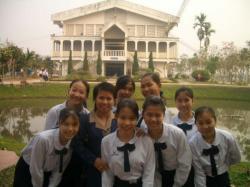 Junior Jagpreet Kaur, a student who moved from India six years ago, relates to Tawiah's experience of culture shock. Coming from a society that highly respects education, Kaur is still astonished about how Americans seem to take their schooling for granted. "Over there, education is a big thing. If you drop a book, you have to kiss a book to show respect," Kaur explains. "Over here, people throw books on the floor on purpose because they don't respect education because they are getting it for free. In India, you have to pay."

Just as educational values differ with different cultures, views on corporal punishment vary as well. Kaur's belief in the respect for academics is so strong that she thinks U.S. schools are not harsh enough with students. "Kids over here basically don't have respect for anything and there's no discipline," she says. "I think that they should be allowed to hit kids when they get really out of control."

Kaur's point of view reveals that not everyone believes physical discipline is harmful for students. While many human rights organizations advocate the banning of corporal punishment, people cannot forget that everyone's views on discipline are dependent on their cultures. Foreign students may be used to the emotionally scarring discipline in their countries because the punishments were a part of their daily lives. "If students are expecting the punishment, it will not affect them," says Goldstein. "Students can be accepting of this kind of culture."