High oil prices may have a silver lining 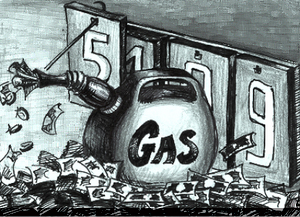 Gas Prices on the Rise

Photo:
Similar prices can be seen on signs at gas stations throughout the Washington area and throughout the country. From the bayous of storm-ravaged Louisiana to the hills of Pennsylvania, where the first commercial oil wells were drilled in 1859, frustrated motorists find themselves paying three dollars or more per gallon to fill their tanks. And as they watch the tally on the pump roll steadily upwards while they fill up their Hummers and Suburbans, America's exasperated drivers wonder aloud: what should be done about high oil prices?

The answer? Nothing. Despite appearances, higher oil prices will be good for the environment, for traffic congestion and, in short, for America.

As long as the sticker shock of $3 to $4-a-gallon gas continues, motorists will try to find a way around paying through the nose to get from point A to point B. In the short term, this would mean carpooling, efficient route planning or taking mass transit. Already, Washington's Metro system reports significant increases in ridership during August and September over last year's totals. Such measures will not only reduce fuel consumption and emissions, but also reduce traffic volume. And anyone who has ever been stuck in the Washington area's brutal rush-hour traffic can see the benefit in that.

In the longer term, motorists will make the switch to more fuel-efficient cars. Already 135,383 hybrid vehicles have been sold this year. That's as many as were sold in 2003 and 2004 combined. These high-tech hybrids can sip fuel half as quickly as their internal-combustion counterparts, and their widespread acceptance could take a substantial bite out of America's thirst for gasoline.

High oil prices could also do more to reduce greenhouse gas emissions than the Kyoto protocol ever could-and do so without the punitive effects on industry that drove the U.S. to reject Kyoto in the first place. Almost 60 percent of the oil that the United States consumes is used in manufacturing. Higher oil prices will cut into industries' bottom lines, forcing them to find ways to reduce the amount of oil they consume. Logically, it follows that such reductions in oil consumption will result in corresponding reductions in hydrocarbon emissions from the burning of oil. The difference is that industry will make these changes willingly to increase profits, rather than begrudgingly just to comply with regulation. Indeed, oil prices well in excess of $60 per barrel will do more to encourage research into alternative fuels and energy-saving technology than all the legislation Congress can offer, including the recently signed energy bill.

Naysayers contend that major reductions in consumption are not possible for a nation as reliant on oil as the United States. History, however, proves otherwise. In 1973, dramatic increases in the price of oil drove consumption down by six percent in only three months. Given that the United States currently consumes about 20 million barrels of oil per day, a similar reduction today could prove to be quite substantial.

Today's seemingly exorbitant will also pay dividends by strengthening America's foreign policy position. Higher oil prices will make domestic oil exploration and production more profitable. Because of North America's geology, extraction of many domestic oil deposits, like those in Alaska, is difficult and therefore unprofitable-when prices are low, that is. However, current price levels make drilling in North America a lucrative proposition. In other words, expensive oil will shift oil revenues out of the hands of these regimes and into American markets, meaning more jobs for American workers and a reduced trade deficit.

Currently, America gets its oil from such oppressive states as Libya, Saudi Arabia and Iran, where oil extraction is straightforward-dig a hole and oil comes bubbling up. One of the few reasons American foreign policy is so lenient on these nations is that our economy relies on the oil they produce. However, reduced dependence on foreign oil, brought about by increases in domestic production along with reductions in consumption, will allow the United States to put more diplomatic pressure on rogue Middle Eastern nations without facing consequences like the 1973 oil embargo.

Still, many drivers may think that today's higher gas prices are a blow to their pocketbooks. It is true that they will have a significant impact on the transportation sector, especially independent truckers and cab drivers. However, the overall economy remains strong. Increases in wages and stock price indices over the past two months reflect continued economic growth. In fact, despite the record highs oil hit over the summer, inflation and unemployment remained low. Inflation continues to hover at a healthy three percent, while unemployment decreased over the summer as 376.000 jobs were created during July and August-all while the price of oil went from under $60 per barrel to over $70.

Besides, those who begin to feel squeezed by today's gas prices can do what mankind has done for millennia: walk. After all, it is what sets us apart from bacteria. And let's face it, burning a few calories by walking to the 7-11 sure beats outweighing your Hummer.