Do Blair's policies make the grade?

Blair's new policies this year have been a mixed bag of successes and failures. Earlier this month, students received their first report cards of the year as the first marking period ended. Now it's time to rate the school's new policies with Blair's own progress report.

The standardized red IDs – or orange to be more accurate – are a big improvement over last year's color-coded disaster both in principle and timeliness. The color-coded IDs, which faced trouble in distribution and segregated students, are now a relic of the past. According to assistant principal Andrew Coleman, most students had their IDs by the third day of school this year, a major improvement over last year's process, which left some students without IDs even three weeks into the year. 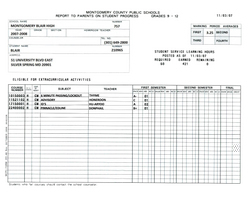 The ID policy is also being enforced consistently this year. First block teachers record the names of students who require temporary IDs, allowing the administration to keep track of temporary ID abusers. "I already have a list of about 12 students who have had more than a few temporary IDs," assistant principal Linda Wanner said.

Students without an ID promptly receive a temporary one during first block or can easily pick up replacements at the concession stand.

Although the necessity and effectiveness of IDs are still debatable, the implementation and consistency of the ID policy is a great improvement over that of last year.

Many students were furious when first told that passing time between classes would decrease from eight to six minutes. But since then, much of the protest seems to have died out. Even for the few unfortunate students who have to hurry from the gym hallway to room 365, six minutes is enough to arrive to class on time, especially now that the portables have been removed. "Students really didn't need the two minutes. They just had to cut down on socializing and focus on making it to class," Wanner said.

The two extra minutes added to each class may not appear to serve much purpose, but over the course of the school year, add up to 24 hours of extra in-class instruction according to calculations.

Along with the two minutes of extra passing time, the widely unpopular lockout policy has been eliminated, according to assistant principal Myriam Rogers. "We absolutely do not want students locked out of their classes," Rogers said. With hall sweeps after every late bell, the school maintains its fight against student tardiness but without the unnecessary severity of detentions used last year.

Allowing students to monitor their grades throughout the marking period is certainly the new system's strong point. In previous years, students were uninformed about their grades in classes where teachers did not regularly hand out progress reports. By the time students learned of these grades, it was usually already the end of the marking period and far too late to boost a bad grade. Pinnacle and Edline provide students opportunities to check up on their performance and correct possible mistakes that arise in teachers' grade inputs.

Aside from the convenient grade-checking option, Edline does not offer much in the way of student resources. "We can't add new features to Edline since it's a third party program," IT systems specialist Peter Hammond said. The ability to check grades is useful, but with Edline comes with the sacrifice of BEN's discussion boards, schedule lookups and e-mail. These tools are now all available in BILL, but utilizing two separate systems is tedious and impractical.

A problem with Pinnacle is its way of separating grades into categories. With this rigid weighting system, performing poorly on a single assignment in a category without other assignments to balance it out can potentially ruin a grade. "We want cumulative grades to paint an accurate picture of a student's performance," Rogers said. "This is something that we need to look into."

The concepts behind advisories are good – bring students into small groups within an academy, cultivate student-teacher relations, share ideas and discuss academic progress while continuing usual homeroom tasks. But advisories have so far failed to make a significant impact on students. In the first few sessions, student enthusiasm towards numerous handouts, mission statement recitals and ethics discussions was less than underwhelming. In the advisory scheduled for next week, students will have to make posters in preparation for Blair's reevaluation for accreditation, according to academies coordinator Jennifer Kempf, which is not exactly an improvement over activities from previous advisories.

Advisories need a major overhaul to gain student interest. Currently, they double as social and snooze sessions. If they are to be kept, greater student interaction must be integrated. Both a grade and academy based advisory would be more effective as well, allowing for discussions relevant to particular groups. Although underclassmen will not be able to interact with upperclassmen, something which is not happening in many advisories at present anyway, current advisories cannot address colleges with seniors or class choices with freshmen. Important topics such as these are impractical to discuss in a setting containing students of different grade levels.

Advisories may just be off to a slow start; many of the proposed plans have not been implemented yet. "This stuff is all new, getting the details right is the hard part," Kempf said. But in their current direction, advisories are shaping up to be nothing more than a lengthier, renamed homeroom, or in other words, a waste of valuable class time.

Despite a few missteps, Blair new policies have been off to a running start. Hopefully the school will be able to retain its winners and correct its flops.