The group’s concert in D.C. this weekend was an experience filled with good tunes and good vibes

Donna the Buffalo, an “Americana” band, performed at the Hamilton in Washington D.C. on Nov. 5. A thoughtful set-list, cozy atmosphere, and brilliant performance made this concert an incredibly fulfilling experience.

Founded by frontmen Tara Nevins and Jeb Puryear, the band is a folk group that draws influences from bluegrass, rock, zydeco, cajun, and old-fiddle music. According to the band’s members, their distinctive characteristics are their “songs of the human spirit, and an incredibly tight relationship with their fans.” Their fans, known as “The Herd,” though few in number, are fervent followers.

The basement of the Hamilton proved to be the perfect venue for the night’s performance. The dim lighting and low ceiling made for a warm ambience, and portraits of musical greats -- Hendrix, Cobain, Dylan, Davis -- hung on the walls as silent onlookers.

The stage was set for the band to play. Puryear’s guitar leaned against an amp, Tara’s electric fiddle lay in its stand, and the drums and organ seemed to sit in wait just like the eager audience that was seated at tables throughout the hall. Members of The Herd were clearly present, decked out in the band’s merchandise, their attire a symbol of their affection.

Finally, the band emerged from backstage. Puryear came out first, a smile on his face, as if he knew a secret he was about to let the audience in on in a few short moments. Nevins on the other hand, wore a calm, blank face. Her grace perfectly complimented his goofy gait. Keyboard player David McCracken, drummer Chris English, and bassist Ted Pecchio came out shortly after. 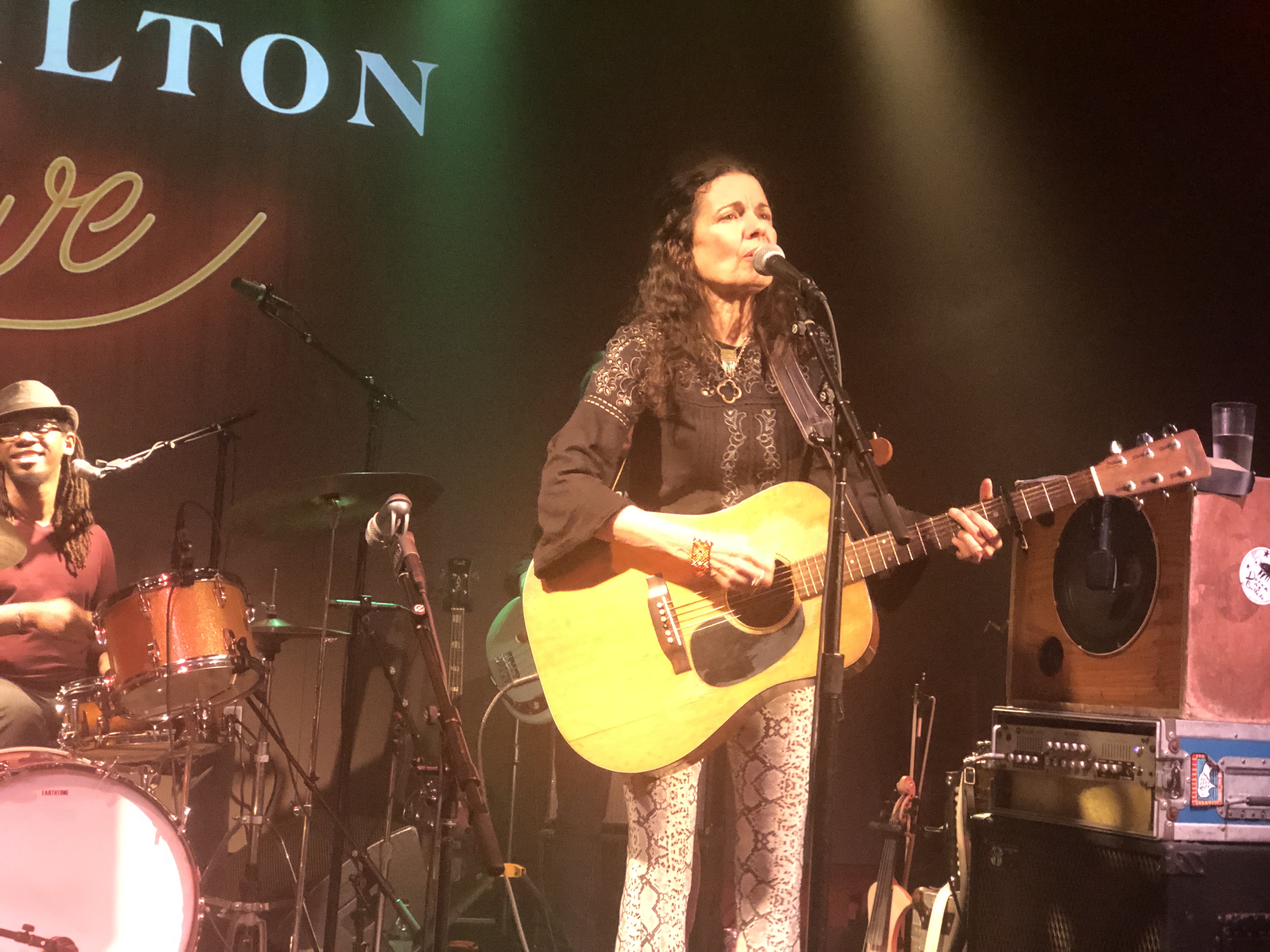 Photo: Guitar is one of the many instruments that Tara Nevins, one of the founding members of Donna the Buffalo, plays.

Photo: Guitar is one of the many instruments that Tara Nevins, one of the founding members of Donna the Buffalo, plays. Photo courtesy of Maya Britto.

The band opened with their song, “Love Time,” to establish the central themes of their setlist for the night - compassion, tenderness, and authentic living. The band then played “40 Days and 40 Nights.” Usually, when the band performs this song live, Nevins extends the fiddle solo. This time was no different, and her performance was nothing short of electric (pun very much intended).

Later, the band performed a cover of Johnny Cash’s iconic “Ring of Fire,” which featured Nevins playing the washboard. Puryear’s voice definitely did the song justice. Like any sincere cover, theirs captured the essence of the song while preserving Donna the Buffalo’s unique sound. Soon after, the band played “Funky Side,” one of my favorite songs off their album “Rockin’ In the Weary Land.”

In the latter half of the concert, the band played more of their upbeat songs, including “Heaven and the Earth” and “Everybody Gets High on Love.” Both Nevins and Puryear made it a point to comment on the venue’s location in the country’s capital. They both expressed concern over the current political climate, and the false sense of patriotism that has made so many Americans act violently in recent years.

After performing a song in which the chorus encourages the audience to do their “thing”, Nevins emphasized the importance of “doing your thing” in a way that does not hurt others. This message of empathy and awareness is clearly communicated in many of their songs and inspires the same feelings in listeners.

The high points of the entire concert were undoubtedly the band’s performance of “Yonder” and the encore, performed by just Nevins and Puryear. “Yonder” featured a breathtaking fiddle solo by Nevins, and neat guitar licks by Puryear. Pecchio and English felt like the heartbeat of the song, driving its rhythm. The chemistry between members of the band was undeniable. They all looked as though they had all independently traveled to the same place, to another world they had created with their music. The encore, “I Believe,” was a slow, soft song and a perfect way to end the night. There were fuzzy feelings all around.

English wore a radiant smile behind the drum kit throughout the set, and Pecchio in the back next to him was constantly grooving with that classic bassist head bop. In between songs, Puryear’s silly jokes paired with Nevins’ dry sense of humor made for some hilarious moments. McCracken was amazing to watch, his forehead wrinkled in concentration and his lips turned downwards during long, nasty solos. The band's energy was infectious, and as part of the audience, I almost felt like I was helping them make the music happen.

Being able to stand less than ten feet away from the band’s members and occasionally sharing eye contact with some of them felt surreal. I think sometimes we forget that the musicians we idolize actually exist in the same world that we do. The musicians of Donna the Buffalo remind us, however, that they are just like you and me. They were so down-to-earth and they highlighted the beauty of simplicity throughout the concert. They did not estrange audiences with ostentatious displays. This is something today’s typical pop artist seems to have difficulty with.

The band’s performance encapsulated not only the best parts of making music, but the best parts of the universal human experience - creativity, community, and compassion. To quote lyrics from the song “Funky Side,” everyone present truly seemed to be “in a trance of love.”