A new wiretapping law will protect our nation and our rights 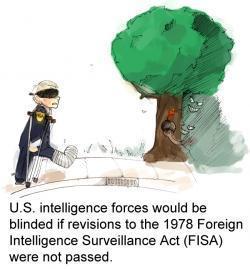 According to the American Civil Liberties Union (ACLU), 46 lawsuits filed under a single U.S. District Court in California against telecommunication providers will be dismissed under the new law. Opponents of the law contend that lawsuits filed against the telecommunication providers are the only means by which the public can keep in check the constitutionality of the government's controversial domestic wiretapping program, but this claim is insubstantial. Four suits filed against government officials are still pending and provide the opportunity for the court to rule on the legality of the domestic spying program. The executive branch was clearly at fault for defying the "Access to Certain Business Records" section of the 1978 FISA, a clause that required the government to obtain a court warrant before obtaining private records of American citizens, but telecommunication providers cannot be held accountable for merely acquiescing to government demands.

The Senate also rejected three amendments designed to delay conferring legal immunity on telecommunication providers so that court investigations could be launched to determine the nature of their involvement with the NSA. Although many senators' desire to preserve judicial review is admirable, the solutions offered in the amendments were very unrealistic. An August deadline for revising FISA legislation and re-commissioning counter-terrorist surveillance could not have been met under the proposed amendments, rendering our nation temporarily incapable of collecting counter-terrorist intelligence and thus susceptible to a terrorist breach.

One of the most conspicuous features of the new legislation is a provision that condones "emergency" week-long domestic surveillance before seeking a court warrant from the Foreign Intelligence Surveillance Court (FISC). Though the 1978 version of the FISA requires the government to obtain a court warrant within three days of "emergency" domestic wiretapping, increased congressional oversight will deter breaches of the new law. A provision that delegates inspector generals the authority to conduct an intensive year-long investigation of the wiretapping program will serve to uphold our civil liberties.

The bill also enables the FISC to grant year-long wiretapping operations on groups of foreign people suspected of terrorist activities - a promising development that holds many security advantages over the old case-by-case approval system that has inhibited counter-terrorist measures in recent years. Some liberals have denounced this provision for creating a new "brazen" authority - a hostile government that, like the Bush administration, will imperil the civil liberties of Americans whose communications are intercepted overseas - but there are in fact many sections of the law that protect against such abuses. Under the new law, the FISC will be granted authority to sanction or reject selected foreign targets and protect all intercepted American communications. The new legislation also requires our government to receive a warrant from the FISC legalizing wiretapping on Americans living overseas, a group whose civil liberties were inadequately protected under the 1978 FISA law. The Attorney General no longer has the authority to approve year-long surveillance of American expatriates without seeking a court warrant, a provision of the old FISA that facilitated the government's control over the illegal wiretapping program.

These new provisions constitute a measureable improvement in the FISA that enables our nation to bolster counter-terrorist operations while ensuring that Americans retain fundamental civil liberties outlined under the Constitution. As Christopher Bond (R-Mo.) wisely asserted during floor debate, "this is the balance we need to protect our civil liberties without handcuffing our terror-fighters."