When a teacher asks their kindergarten class to talk about their weekend, a student can’t share about his weekend spent at his aunt’s and her wife’s wedding. In a third grade classroom, the teacher skips over mentioning Alan Turing, a British mathematician who developed the first modern computers, during a class discussion about math and computer science. As far-fetched and extreme as these situations may seem, they could very well be a reality in some Florida classrooms in the near future thanks to the “Don’t Say Gay” bill recently signed into law by Florida governor Ron DeSantis.

The controversial “Don’t Say Gay” bill, officially titled “Parental Rights in Education,” was passed by the Florida senate on March 8 and signed into law by Desantis on March 28. The bill, which will take effect on July 1, prohibits public schools from teaching about sexual orientation or gender identity from kindergarten through the third grade. It also limits its discussion through twelfth grade in a manner deemed "age-appropriate" by parents. Although the law never explicitly targets gay or transgender students, the bill is still damaging.

This bill sets a dangerous precedent for public schools; its vagueness disguises its intention to create a hostile environment for LGBTQ students under the veneer of protecting parental rights.

Some believe that the law is a lot less harmful than others make it out to be, even if they’re not exactly supporters of the law themselves. Sophomore Josh doesn’t support the law but believes that the law isn’t necessarily directed towards gay people because the bill never mentions the word “gay.” “The [name] of the bill is a bit misleading… What’s in the bill never explicitly mentions the word “gay” being banned,” Josh says.

It's important to consider the law in the context of our culture. While the law’s ban on classroom discussions about “sexual orientation” and “gender identity” may seem to encompass discussions about straight and cisgender people just as much as gay and transgender people, this simply wouldn’t be true in practice.

For example, in 2021, the “The Breakaways” by Cathy G. Johnson, a children’s graphic novel about joining soccer teams and trying to fit in in middle school, was banned in elementary schools in a school district in Texas due to it being “not age appropriate.” The graphic novel is similar to many other coming-of-age graphic novels that have never been banned. The only difference? “The Breakaways” features LGBTQ characters while the others do not. If the simple existence of transgender and gay characters deems a book to be “not age appropriate,” then the law’s vague ban on “not age-appropriate” discussions can easily turn into a ban on any discussions relating to LGBTQ topics.

The law doesn’t need to explicitly state that it’s meant to limit discussion on LBGTQ topics-- by looking at it through the context of our culture, its aim is clear enough.

The inclusion of LGBTQ discussions in classrooms is important for all students. For Will Larkins, a junior at Winter Park High School in Florida, learning about queer history and culture, even outside of school, was important in their journey to self-acceptance. "As I learned about the history and culture of my community, I grew to understand and love myself. Education made me hate myself less," Larkins wrote in a New York Times article.

According to researchers at WestEd, an education nonprofit, LGBTQ students are less likely to be engaged in school and more likely to be in fear of physical violence. According to GLSEN director Eliza Byard, a key component to helping LGBTQ students is including discussions of sexual orientation and gender identity in school. “Research has made clear that LGBTQ students who see themselves reflected in the curriculum do better in school, are more likely to feel connected and invested, and have a better and clearer sense of themselves,” Byard says in a U.S. News article. By banning discussions about these topics from classrooms, Florida’s law deprives its LGBTQ students of a space for self-acceptance. 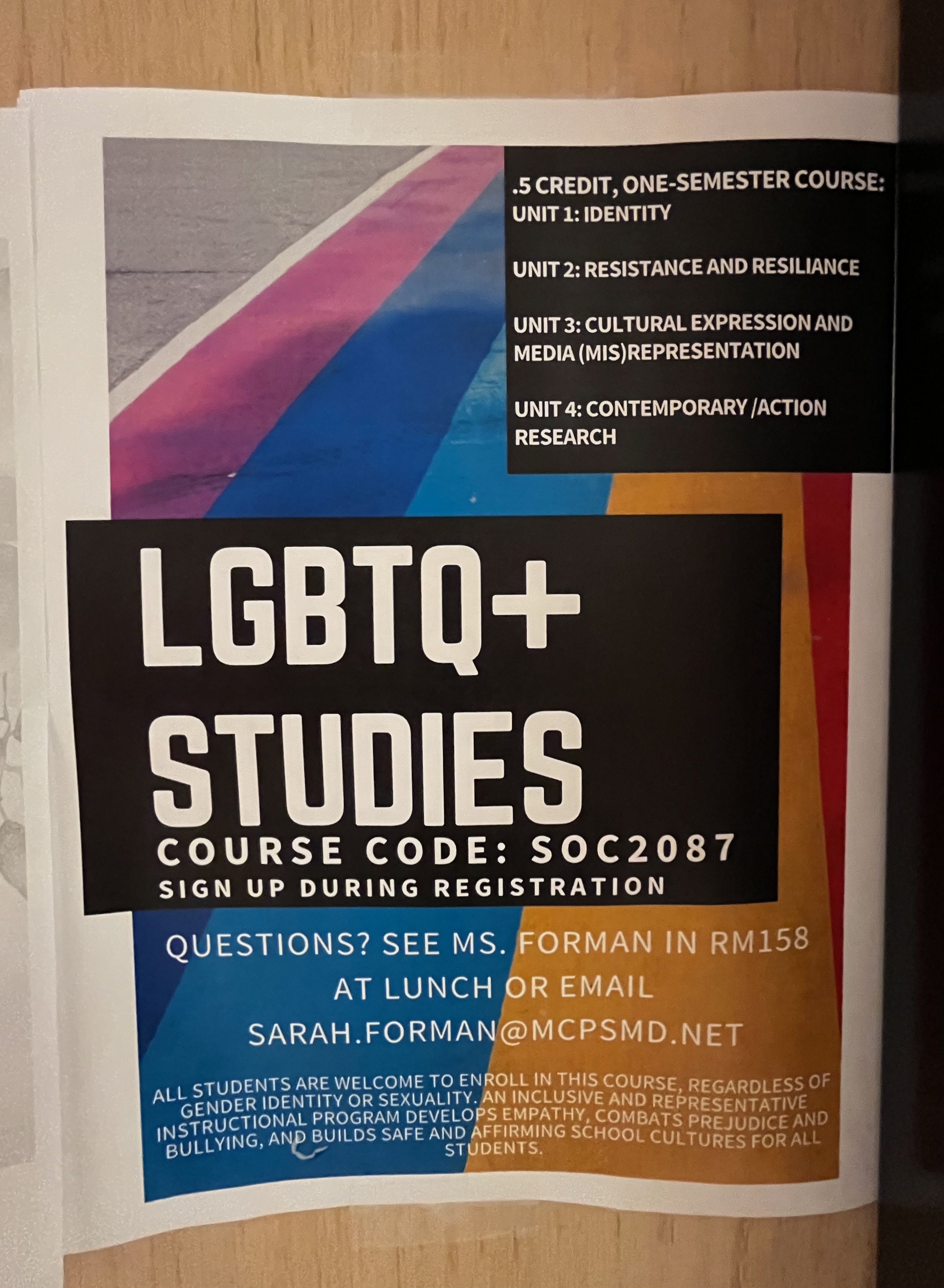 Photo: LGBTQ+ Studies is a Blair course taught by Sarah Forman that focuses on LGBTQ history and current events.

The “Don’t Say Gay” law may only apply to Florida, but many other states, such as Kansas, Tennesse and Indiana, are creating similar bills of their own. If this trend of hiding discriminatory practices against LGBTQ students behind claims of protecting parents’ rights over their children’s education continues, school systems around the country will be moving backwards in providing a safe and welcoming environment for their LGBTQ students.