Don't walk in the PARCC

Students, teachers and parents alike are waiting with concern and trepidation for the upcoming Common Core aligned Partnership for Assessment of Readiness for College and Career (PARCC) tests that will be administered to Blair sophomores this March. And for good reason: in the past few years, the fiscal, technological and academic problems with the PARCC assessments have caused more than a dozen states to drop the test. Common Core and PARCC will undermine education at Blair, Montgomery County and states across the U.S. In order to prevent such an educational fiasco, Maryland should drop out of the PARCC consortium.

The story of PARCC starts with the Common Core State Standards Initiative, an initiative to create a set of curricular standards that apply to every state in the nation. The effort was led by the National Governors Association (NGA), a trade association that includes most American governors. The NGA worked to create the standards, which were then adopted by the vast majority of states. To assess how the Common Core standards were being met, groups of states organized themselves into consortia, in which members agreed to take the same Common Core aligned test. There are two testing consortia that the federal government has recognized as aligning with Common Core: The Smarter Balanced Assessment Consortium and PARCC.

Photo: The Partnership for Assessment of Readiness for College and Career (PARCC) tests will begin at Blair in March.

Photo: The Partnership for Assessment of Readiness for College and Career (PARCC) tests will begin at Blair in March. Photo courtesy of Arkansas Department of Education.

On the surface, this all sounds perfectly reasonable. Why shouldn't all states adopt challenging, rigorous and unified standards? But after digging a little further into the development and adoption of those standards, things start looking decidedly more sinister. The Math and English standards were written by two NGA workgroups, with 24 members total. Of those 24 members, the majority came from three organizations: the testing companies College Board and ACT, and the education non-profit Achieve Inc. None were classroom teachers. So in developing what is the biggest change in education policy since No Child Left Behind, classroom teachers—the very individuals who are expected to teach the new curriculum—were shut out from the conversation.

Common Core advocates routinely claim that the initiative is a purely grassroots effort to improve public education. This could not be further from the truth. One of the leading organizations behind Common Core is Achieve Inc., which, as mentioned before, had a significant impact on the development of the standards. Achieve is the former Project Management Partner of the PARCC consortium, and continues to funnel millions of dollars into PARCC and Common Core adoption efforts. Where does Achieve get its money? The donor list for Achieve Inc. is a who's-who of America's Fortune 500 companies. Among the major donors are AT&T, Intel, Prudential Investments, ExxonMobil, Chevron and Microsoft. Another primary corporate interest at play is Pearson Inc, the multi-billion dollar textbook and testing company that won the right to write the PARCC assessments, which has also funneled millions into pro-Common Core and PARCC advertising.

There is no real fundamental problem with business leaders being involved in education. But corporate educational influence is a part of a strain of educational thinking towards reform by means of strict standardization and oppressive testing. PARCC and Common Core are a part of this trend, as is the Bush-era No Child Left Behind Act (NCLB), which mandated that states test student achievement and based federal aid on those test scores. Like the Common Core standards, corporations were acutely involved in NCLB, especially companies like Pearson that benefit from increased testing.

The trend in modern education reform is to test kids and fire teachers based on test scores. But there is no evidence that this effort has any positive effect on student learning. In fact, it makes school less engaging for students and less rewarding for teachers. The emphasis on testing in public education is poisonous to the atmosphere of learning. High school teacher Joshua Katz said it best when he asked, "How can we possibly believe standardized testing accurately measures student achievement? How can it measure that "a-ha" moment when a student's light is finally lit? That moment when a student says 'thank you' for helping him graduate with a 2.0 GPA?" 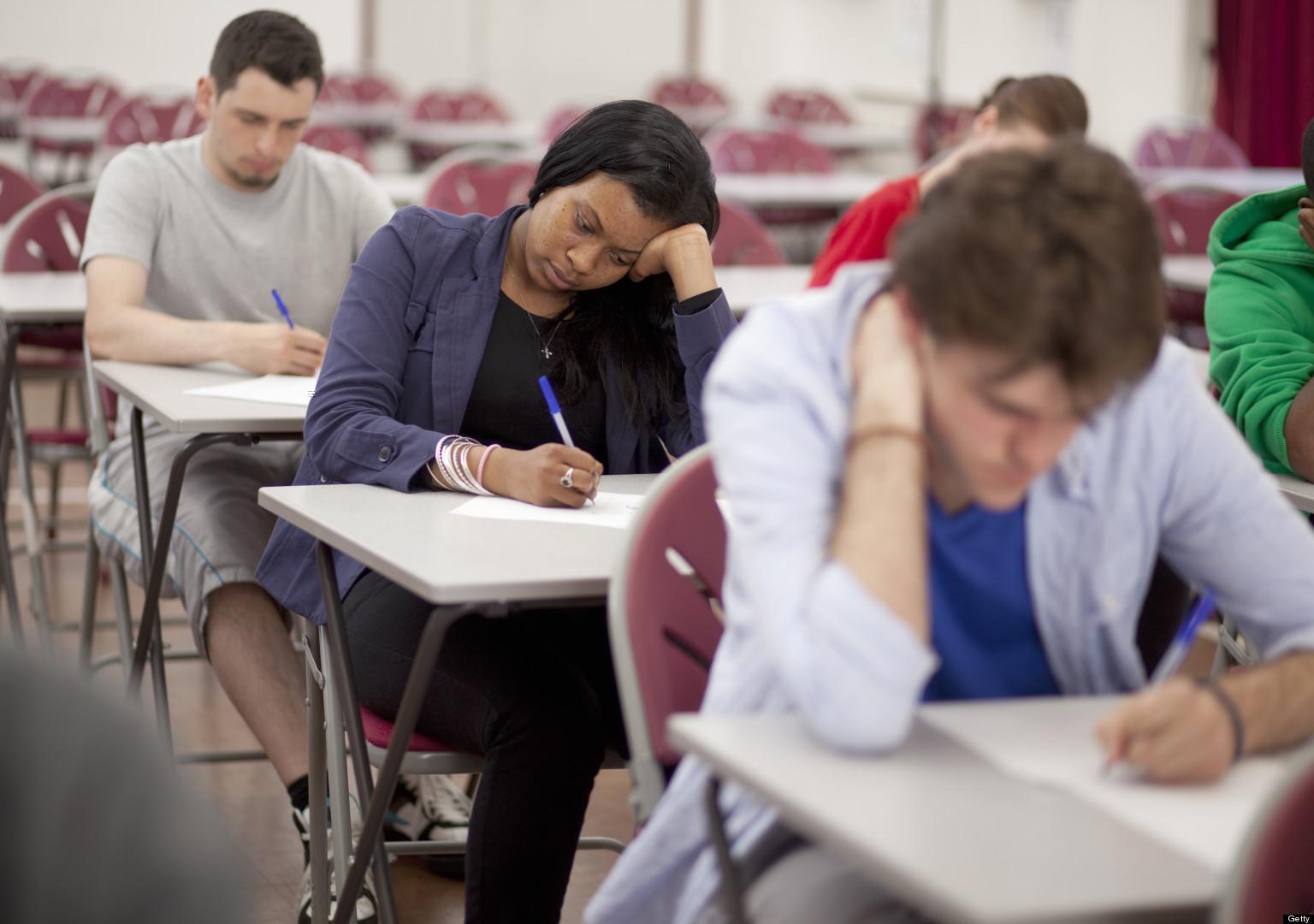 Photo: Standardized testing takes much of the joy and wonder out of learning.

Photo: Standardized testing takes much of the joy and wonder out of learning. Photo courtesy of the Huffington Post.

Any teacher or student understands that learning is not quantifiable. No student will tell you that their most meaningful learning experience was in preparation for a standardized test. And so much more than classroom learning informs test scores. Standardized testing ignores the effects of poverty, hunger and violence on the learning environment. But the creators of Common Core and PARCC don't get it, because they are not in the classroom.

Even technically, the PARCC tests are impractical. Both the English and math assessments must be completed online. Students taking the math test are not allowed access to a pen or scratch paper, so many difficult calculations must be computed in one's head. For the English test, students can't have a whole passage in front of them. Instead, they have to scroll up and down very long readings to find the relevant section. Possible multiple choice answers are ambiguous and confusing. In states that have piloted the tests, failure rates are jaw-droppingly high. New York released scores that showed 70 percent of students failed either the math or English Common Core exams.

In theory, Common Core is a good idea. All the countries that lead the world in educational achievement have rigorous national standards. But these standards and this test are inadequate. They are another part of a trend in education that moves towards corporatization, discredits and ignores teachers and removes from learning what is fun and exciting. When learning is boiled down to a mere number, the joy and journey of learning is lost. The PARCC tests will negatively affect Blair, just as they will negatively affect all states and districts that administer them. The PARCC tests will undermine education everywhere they're given. In order to prevent a damaging testing regime from descending on Maryland's schools, Maryland should drop out of the PARCC consortium.