Many of us high schoolers deal with stressful situations outside of school. Whether it's playing a sport, taking care of younger siblings/elderly relatives or achieving a personal goal, we all need time away from schoolwork in order to deal with such situations. However, Diane Tran, a high school student from Texas, did not have enough time in the day for all that she had to do.

Tran took on the responsibility of working one full-time job and one part-time job to support her brother and sister when her parents divorced. Aside from her two jobs, Tran takes challenging courses, such as AP Spanish and college level Algebra. With all the work Tran has cut out for her, it is a wonder how she even sleeps. Well, she doesn't. And that's why she got put in jail on May 23.

Tran was sent to jail for 24 hours by Judge Lanny Moriarity because she missed too much school. Texas law states that if a student has ten or more unexcused absences within a six-month period, the school district may refer the student to juvenile court. Tran was also fined $100. 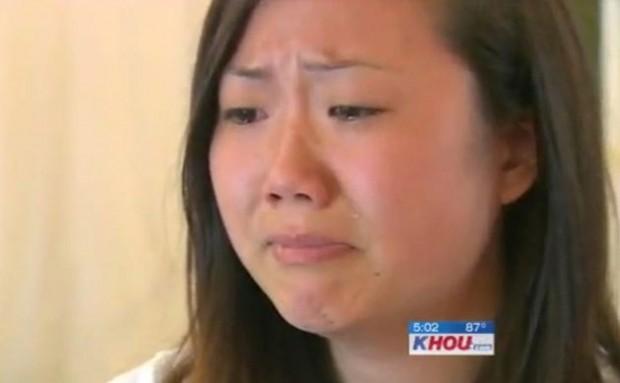 Photo: Diane Tran, a high school honor student, was jailed for missing too much school due to work.

Photo: Diane Tran, a high school honor student, was jailed for missing too much school due to work.

While Tran was guilty of missing more than ten days of school, it was not because she was just "skipping” school or didn't feel like going, it was because she was just too tired. "She goes from job to job, and stays up till seven to do her homework," Devin Hill, a classmate of Tran's, said in an interview with KHOU news. Tran was warned by a judge in April about missing too much school, but she had to miss school once again due to her extreme workload. The judge defended his decision by asking KHOU reporters, "If you let one run loose, what are you going to do with the rest of them? Let them go too?" he said. Tran was not running "loose," she was running from job to job.

Many high school students are blessed with parents or guardians that provide for them so all they need to worry about is their own personal expenses and their schoolwork. Tran had no one to care for her or her siblings and she had to take on both parent roles for herself and her siblings. She holds a full-time job, which is 40 hours of her week gone, attends school, which is another 35 hours gone, and on top of that holds a third job, which leaves her with no time at all for herself. However, this hectic schedule hasn't stopped Tran from challenging herself academically. Tran is taking several college classes in which students are expected to spend hours outside of school studying for. She is a straight A student despite her situations, and has successfully provided for her family without anyone's help. "This remarkable young woman doesn't deserve jail, she deserves a medal," wrote a change.org commenter going by the name of Letitia Gutierrez.

When trying to understand Tran's case, it is important to remember that she is only a teenager taking on an amount of responsibility that even some adults can't handle. The judge's sentencing would be understandable if Tran was failing the classes she was missing, but instead she was a straight-A student who stayed up till seven in the morning to do her homework. Tran's maturity and responsibility is admirable and should be recognized to serve as an example for teens everywhere.

helpdianetran.com, a website set up by the Louisiana Children's Education Alliance in partnership with Anedot and Gatorworks, has raised over $28,000 for Tran after hearing her story. A petition at change.org has recieved over 26,000 signatures in attempt for the judge to revoke the teen's fine and sentencing.

If you would like to make a donation, visit HelpDianeTran.com.