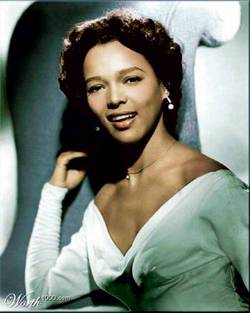 Dorothy Dandridge was born on Nov. 9, 1922 in Cleveland, Ohio. Her acting career began when she and her sister, Vivian, performed as part of "The Wonder Children," a group Dandridge's mother, Ruby Dandridge, who was an actress herself, created. During the 1930s, Dandridge left high school and established "The Dandridge Sisters," a performing group consisting of three women, including Dandridge, her sister and a friend, Etta James.

Dandridge went on to perform with "The Dandridge Sisters" at the legendary Cotton Club in Harlem and was soon offered her first small roles in film; in 1937, she appeared in "Day at the Races" and in 1942, "Drum of the Congo." Dandridge married Harold Nicholas three years later and became pregnant with her one daughter, Harolyn; unfortunately, Harolyn was born with mental retardation, leaving Dandridge unable to properly care for her, thus causing Dandridge to place Harolyn in foster care. Dandridge retired from performing during the time she was married to Nicholas, but her marriage did not last, and the couple divorced in 1951. Although she re-married in 1959 to Jack Denison, Harolyn was the only child Dandridge ever had.

After her divorce, Dandridge returned to performing at nightclubs and soon was entertaining crowds all over the world in places such as Rio de Janeiro and London. Her first starring role was as a teacher in "Bright Road" with Harry Belafonte, and her next leading role was in "Carmen Jones" in 1954. It was as Jones that Dandridge truly gained stardom when she became the first black woman to receive an Academy Award nomination for Best Actress. Though she did not win the award, Dandridge continued to gain popularity and was on the cover of "Life Magazine" in 1955. Unfortunately, in the years following this rise to stardom, Dandridge only starred in one successful movie, "Porgy and Bess," in 1959. Her more mediocre performances include "Island in the Sun" in 1957, "Tamango" in 1959 and "Malaga" in 1960.

Dandridge did not completely lose faith in herself, however, until 1962, when her second husband left her; Dandridge had lost more than half of her savings earlier that year when his restaurant went out of business. Soon after their separation, Dandridge began to drink heavily and take antidepressants. She eventually overdosed and committed suicide on Sept. 8, 1965. Dandridge was 43 years old.