Sixteen years ago, Mississippi residents and sisters Gladys and Jamie Scott were sentenced to life in prison in after committing armed robbery on an older man, during which they reportedly stole $11. Yesterday, the "robbers" were finally released from prison after Mississippi Gov. Haley Barbour (R-Miss.) agreed to free the sisters if Gladys, 36, donated her kidney to her ailing older sister Jamie, 38. Although Barbour's decision to free the two on such a basis was highly controversial, the Scott sisters' deserved this chance to turn their lives around after being wrongly convicted by the flawed justice system. 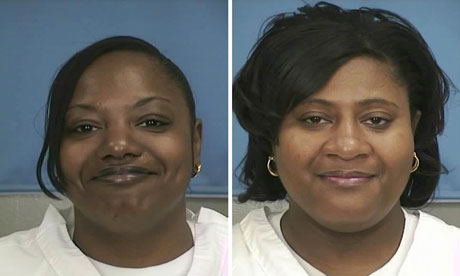 Barbour justified the unconventional release of the sisters by arguing that their release will help the government save a significant amount of money. According to a Mississippi radio interview with Barbour, it costs $190,000 a year to detain a patient on dialysis. Barbour believed it was unfair to tax payers to have to pay for such a thing.

Aside from the economic perspective, the Scott sisters' original sentencing was quite extreme. The sisters were serving double life sentences for their role in the robbery, but the other three men involved in the incident were required to serve less than three years in jail after taking a plea bargain. The fact that the sisters committed armed robbery cannot be overlooked, but if no one was injured in the process, life in jail seemed undeniably cruel.

On that note, the three men who eventually admitted that they had committed the robbery, confessed to giving a false testimony during the Scott sisters' trial. They stated before the judge and jury that they were forced by local authorities to point their fingers at the sisters with the potential of a lenient sentence. Even the robbery victims said that the sisters had nothing to do with the robbery and neither one of the sisters had a prior record before this outrageous conviction and life sentence.

It is quite tragic to think that the justice system allowed two women to spend a large portion of their lives in prison for such a trivial crime. Although their intentions were ill when they decided to participate in robbery, things could have turned out a lot worse; fortunately they didn't. The question of why the sisters were allowed to be locked up for such a long period still remains unanswered and the only justifiable decision made in this case was Barbour's decision to release them.

Now released, the Scotts will be back home within a matter of days. They have a total of five children between them, and their release will allow them to go home and see the family and friends who they have been away from for the past 16 years. Although justice has finally been served, it is sad to see that it took so long.