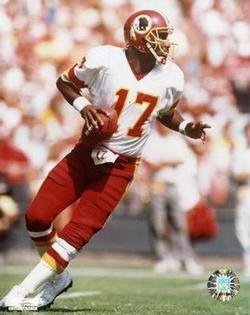 Washington Redskin Doug Williams was the first black quarterback to win a Super Bowl. He was named the MVP of the Super Bowl XXII, after leading his team to a 42-10 defeat of the Denver Broncos.

Born in 1955, Williams became interested in football and was given the opportunity to play as a quarterback for the Washington Redskins under the leadership of Joe Gibbs. During the Super Bowl XXII, Williams completed 18 of 29 passes, four touchdowns and covered a record 340 yards. Notable passes in the game included the 80- and 50-yard passes to Ricky Sanders and a 27-yard pass to Gary Clark. Williams also tied the Super Bowl record of four touchdown passes in a game.

Williams' successful plays are even more extraordinary since he had to leave earlier in the game after an injury to the knee.

Information has been compiled from superbowl.com.

Danielle Foster. Danielle is a senior and all she can say is "it's about time". Now 17, driving, and close to completing the Communication Arts Program, she is ready to graduate on June second. This is her last year at Blair though, and she plans to make … More »