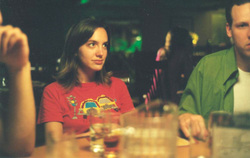 "Funny Ha Ha" is the quintessential indie film, complete with long, shaky shots and poorly lighted sets. Bujalski, however, uses the grainy film stock in his depiction of Marnie and her friends' lifestyle to show that these people are not special and do not pretend to be.

The simplicity is even more dramatic with the movies lack of music and montage. There are no smooth transitions and continuity is rarely maintained, symbolizing the erratic lifestyle in which Marnie lives. Even the credits have no background music because Bujalski's film, like life, requires no soundtrack.

The script maintains Bujalski's vision of asceticism. Although the film most likely had a vocabulary of fewer than 300 words, every thought and feeling was expressed in its rawest and most human form. The conflicts between Marnie and her friends and coworkers show no signs of the Hollywood gloss that has infected most feature films.

The acting in particular was superb, especially Kate Dollenmayer's portrayal of Marnie. She begins as a twenty-something seeking stability as a temp worker as well as spontaneously partying and drinking. She develops after her twenty-fourth birthday into a more mature woman and begins to establish goals for her life.

Bujalski wrote each of these characters for his friends, and used them in place of "real actors". This realism makes the chemistry between the characters meaningful, and gives a unique quality that is usually only seen in documentary filmmaking.

Marnie's problems set the stage for Bujalski to address his own philosophical dilemmas, such as self-redemption and how "you never know what's gonna happen". Although Bujalski does not directly answer these questions in the film, Marnie answers them by trying to redeem and stabilize her life in order to justify her own existence.

These minimalist characteristics shed a light on Bujalski's cinema verité influences. Some have even compared him to the avant garde filmmaker Mike Leigh, who notoriously does not have scripts when creating his films, instead using precise character studies with his actors. Bujalski's realism is apparent in the personal way in which he made "Funny Ha Ha:" without professional actors and with a miniscule cast and crew, even down to the credits which role in utter silence, leaving the audience questioning themselves and what they had just experienced.