"Drawing a Blank": A few spaces

Daniel Ehrenhaft's new teen novel "Drawing a Blank: Or How I Tried to Solve a Mystery, End a Feud and Land the Girl of my Dreams" stars 17-year-old Carlton Dunne IV, a self-dubbed misanthrope and comic nerd, with a family past that comes to haunt him. When Carlton's father, Carlton Dunne III, obsesses over a family heirloom from their Scottish ancestors, he is kidnapped. Drawn to Scotland to rescue his father, Carlton is thrown in with ancient family feuds, even older superstitions and a few quirky characters. 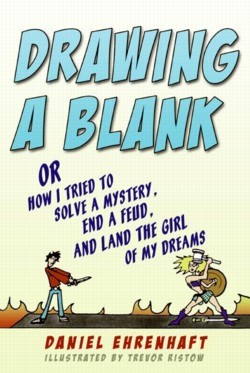 Obviously written by a young writer, "Drawing a Blank" targets teenagers in the stylistic choice of words and short chapters. Unlike many young adult books where authors fail to capture the essence of being a teenager, Danial Ehrenhaft possesses this talent as evident through his depiction of Carlton's teenaged mind. Cheesy renditions of teen talk are happily absent from "Drawing a Blank."

Unfortunately, this realism is lost on the minor characters and only partially evident for Carlton's love interest, 19 year old Annabel. A native Scottish girl bitterly in the middle her own family crisis, Annabel befriends Carlton when he arrives at the airport and helps him through his journey. Her depth is portrayed through her compulsions and curiosities (teeth brushing for example), which are both amusing and a little off-putting.

While Ehrenhaft realistically portrays his teenaged protagonist, his other characters fall into predictable stereotypes among even more predictable situations. Many of the events could be drawn from any James Bond flick, right down to the inevitable betrayal, subsequent relationships and U.K. slang. While many of the "surprise twists" are far from surprising, the quirkiness of the book makes a reading worthwhile.

More recent books that advertise to teen readers, like "The Gossip Girls" and "The Princess Diaries," appeal to the readers with pop culture references that will be obsolete in less than a year. Instead, "Drawing a Blank" uses references to pop culture that readers of all ages would get – and understand. Included are Led Zeppelin's songs and Marvel characters – the only thing missing is a few "Braveheart" lines to complete the feel.

Different than other "journey" books for teens, "Drawing a Blank" stands out through Trevor Ristow's illustrations. Matching up roughly with the events of the book, two page comics are strewn through out the chapters, a creation of Carlton's incredible imagination. These cartoons, which are well done not but not outstanding, break the novel into segments and provide extra insight into Carlton's mind.

By the finale of the novel, which has an action movie feel, the reader is ready for some real answers, not more questions. The final state of the situation in Scotland regarding characters, places and myths are never fully disclosed despite the need to.

Despite its flaws, "Drawing a Blank" succeeds in humor and originality. Even if you aren't a fan of comic books, Scotland or Led Zeppelin, the novel is worth the read - just don't expect to "draw" any great lessons from it.