Blazers cover up, but teachers need to simmer down

On the first day of school, students cluttering the hallways at Blair seemed to glow of one color: skin-tones. Spaghetti straps, boxers and short-shorts were the clothing – or lack of clothing – that paraded around the school. However, due to the additional regulations prohibiting spaghetti-strap tops, skirts or shorts that are not fingertip length and pants worn below the waist, the hallways now sparkle with the brilliant colors of new clothes this season.

Montgomery County Public Schools (MCPS) does not have a formal dress code policy, but instead relies on each school to develop its own limitations and rules. While it has taken Blair an especially long time to enforce these dress code regulations, students are responding to the new enforcement by finally showing off their fashion creativity rather than what their mama gave them. About time. School is a place of education, and students should dress accordingly. However, some faculty members take the dress code regulations way too far, utilizing it to embarrass or patronize code violators rather than simply correcting them. 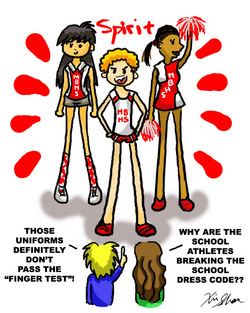 Even though teachers argue that students have no right to complain about the implementation of an existing dress code, let's be real. Blair has not had a serious dress code within the past decade. Although the staff is now merely enforcing the already-existing code, this "new" code is still a whole new obstacle for students.

While the reasoning behind the dress code is substantial, the code's enforcement has been unfair. The dress code especially targets females whose clothes are more likely to violate the rules. While boys can make simple readjustments, girls are unable to make their shorts grow an inch longer or their straps an inch wider. Disputes over what is or is not appropriate also varies from teacher to teacher, making it difficult for students to decide what to wear. Faculty must recognize this disparity and allow girls who are dressed inappropriately to change into other available clothes from friends or a locker before they are forced to wear the ridiculously oversized school-distributed clothing.

Ironically, even some of the athletic team uniforms, like cross-country, poms and volleyball, violate the dress code's finger-tip rule. Yet this violation is neither addressed nor viewed as a coherent problem by the administration.

The purpose of the dress code is to establish a more respectable and efficient working environment, an understandable and reasonable request. For too long Blair allowed scantily clad students to use the school as a fashion runway. The staff should emphasize and explain this reasoning rather than labeling certain clothing as merely "distracting." Students see much more skin and risqué fashion every time they walk out their front door or turn on the television.

Taking a boot to booty shorts

Like any other new enforcement at Blair, administrators must allow time for students to adjust to the new regulations of the dress code. Teachers also need to understand that although it is their job to enforce the new rules, they should be considerate to students. Teachers are not fashion critics, and have neither the right nor privilege to be insensitive when employing the dress code. Rather than humiliate students in front of their friends and peers, faculty members should speak to students privately. The dress code does need to be strongly implemented in order for students to take it seriously, but there is no need to be rude or condescending when teachers see a violation.

Like most of the rules at Blair (think back to last year's IDs and hall-sweeps), students expected the dress code's enforcement to last a week at most; by now, it has become evident that the rules are here to stay, and this first month of school will be full of students still adjusting and experimenting to see whether a certain shirt is acceptable or not. At the very least, the administration can rejoice that as time goes on and the weather turns colder, students will be forced to adhere to the dress code.