Driverless cars ready to traverse cities and help save lives

On July 30th the UK announced that it would allow driverless car testing to take place in up to 3 of its cities. The news marks the first time that testing has been green-lit outside the United States and seems a very promising step forward for the driverless car revolution. Though it may seem unlikely now, the speed at which the technology is being developed suggests that driverless cars could be seen cruising down your street as early as 2017. Some might find this prospect unsettling, but this technological shift is an inevitable turn of events and one that will be largely beneficial. From the promise of safer roads to the prospect of being catered to by an automated chauffeur; driverless cars are an intriguing advance sure to propel us into an amazing future.

For all of its futuristic appeal, autonomous cars are hardly a new idea. The 1920s saw the "linrrican Wonder" navigating New York City's narrow streets. Granted, the car was guided by people via remote control, but that was just the beginning of a long-standing push toward creating an automated car. The 1970s saw the emergence of anti-lock braking systems (ABS), a safety mechanism which helped the driver apply their brakes in such a manner that skidding was reduced. At about the same time, the Global Positioning System (GPS) was developed and put to use. The logic behind ABS coupled with the GPS's abilities to provide maps and directions have allowed for modern efforts to create a self-driven car. Today, automobile companies like Volvo, Audi and Tesla have announced their development of autonomous cars. Even tech giant Google, which has not done much automobile work, has been testing a fleet of autonomous prototypes on the street. Of the lucky few who were able to test out the Google prototypes , most seemed charmed by the experience and excited to use it in the future. 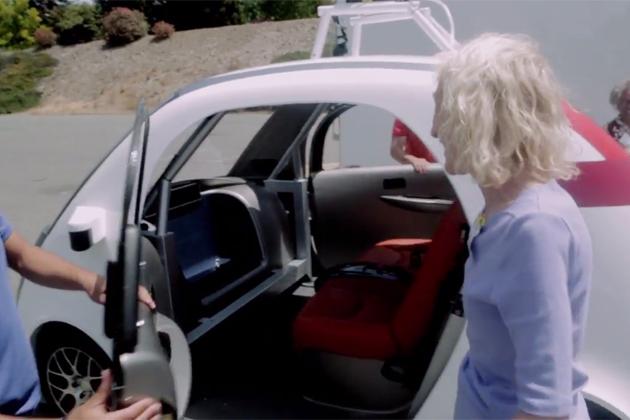 Photo: Steering wheels and gas pedals are notably absent from Google's prototype, a very big change from the traditional car.

As is true for all new technologies, there are a few caveats to the promise of positive change. One concern with today's prototype driverless cars is their need for a persistent Internet connection to navigate successfully, which reduces the geographical usefulness of the car. But given the quickly spreading internet capable infrastructure, chances are most populated regions should prove to be fair game. Another worry is that people don't have many options when it comes to controlling the car. In most cases there is no steering wheel to turn, or accelerator to step on. You're at the complete mercy of your car's computer, which, for all its powerful calculating abilities, might find itself in an unexpected situation and in need of a human's touch. There is little evidence to suggest that any such errors are likely to occur seeing as during the 700,000 miles that Google's autonomous fleet has driven, no incidents have taken place where the car was at fault.

Whatever is said about the technology, it is likely going to stir up some very interesting issues. If an accident were to occur, who would be to blame? The owner of the car? The automotive company that built it? Maybe it would be seen as the car's mistake, which is a fairly amusing thought. How would the production of these cars affect the economy? They have the power to put quite a few people out of business, like taxi or chauffeur drivers. Then again, the appearance of these cars will likely result in a large demand for workers to build them. It will be the creation of a whole new branch of the automotive industry, one certain to have positive economic effects.

Driverless cars put forth a good deal of advantages to traditional driving practices, mainly because they remove human unpredictability from driving. Over 90% of traffic accidents are the result of some sort of human error. This has only worsened since distracted driving has become more common, largely as a result of mobile devices. A driverless car is capable of keeping track of its surroundings far better than a person, and it has its full attention on the situation before it. These automatic cars could also make it easier for people to get around. No longer would age, state of health or disability limit somebody's ability to go places.

Change can be an unnerving concept, but it is an inevitability not worth fighting against. Driverless cars have the potential to revolutionize automotive safety, greatly reducing the number of fatalities on the road. There is also a significant convenience factor to take into account. The stresses of driving would be non-existent and you'd be free to do as you wish while being driven around by a trusty computerized driver. There is no stopping these cars from finding their way to our streets, and why would we? Chances are that they will make our roads more secure and travels more comfortable, as well as put a futuristic spin on our lives. All that they need is the opportunity and a bit of support to realize these potentials, making our lives a whole lot better in the process.