A deep dive into the songs, the artists, and all of the in-betweens.

“drivers license” is an emotional tribute to lost love, broken promises, insecurity, and conveys a deeper sense of sadness that listeners can relate to. With a minimal guitar and piano background, Rodrigo soars through her vocal range, from quiet ballad-like verses to a belted chorus and bridge. The song incorporates the typical features of sad pop (simple backgrounds, soft lyrics and emotional choruses) but Rodrigo’s voice adds a special element of grief that strikes deeper. Her voice shifts seamlessly between the almost-shaky introduction into an intense climax, all without feeling out of place.

As Rodrigo described in an interview with Billboard, “drivers license” is “[her] deepest insecurities in a four-minute song.” In the days after its release, “drivers license” spiked to the #1 spot on Apple Music’s Top 100 and has stayed there since, and also set a new Spotify record for most streams in a day of a non-holiday song. The song has also gained popularity on social media app TikTok, where fans have made parodies from different perspectives (i.e. the “blonde girl,” the boy she is singing to, and even the driver’s license itself). 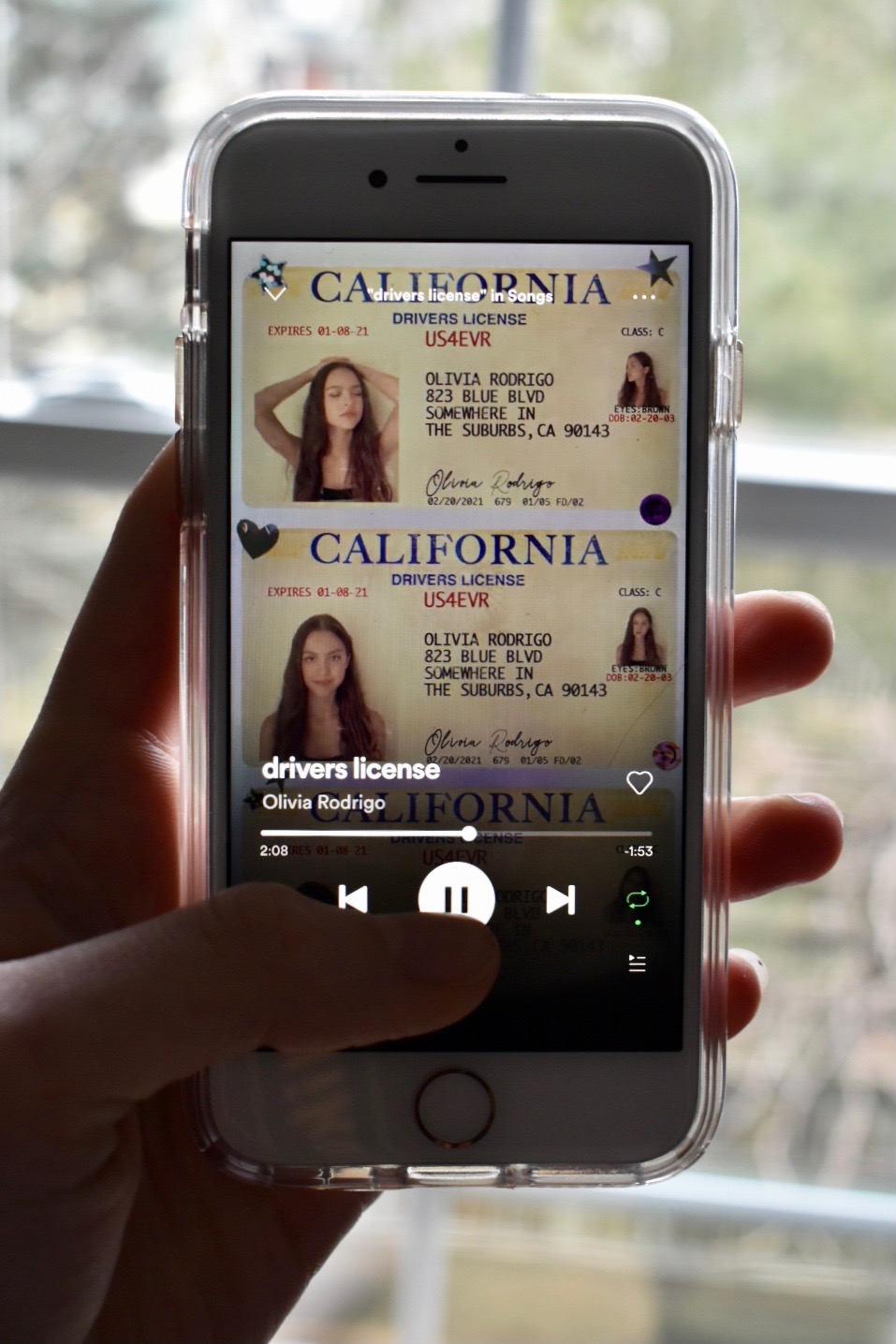 While “drivers license” is Rodrigo’s debut single, it’s not the first time she’s worked with music and songwriting. She had previously written “All I Want” back in 2019 for the soundtrack of High School Musical: The Musical: The Series (HSMTMTS), in which she stars as the female lead. Fans have surmised that “drivers license” is a heartbreak song about Joshua Bassett, who played the male lead in HSMTMTS, and that the “blonde girl” mentioned in the song refers to Sabrina Carpenter, who Bassett is rumored to be in a relationship with. However, this remains unconfirmed by all parties involved, despite heavy speculation from fans.

Despite many fans speculating that “Skin” was a song released in retaliation toward “drivers license,” Carpenter clarified that this was not the case in a recent Instagram post. She expressed that the song is not meant to be aimed at anyone in particular, rather being a song about personal strength and growth. “[I] wasn’t bothered by a few lines in a (magnificent) song and wrote a diss track about it. [I] was at a tipping point in my life for countless reasons. [So I] was inspired to do what [I] usually do to cope, write something that [I] wish [I] could have told myself in the past,” Carpenter wrote.

On the other hand, Joshua Bassett’s release “Lie Lie Lie” which came out Jan. 14 is far more hard-hitting than “drivers license” and “Skin,” with an intense guitar background and fast-paced singing. The lyrics are harsher than both of the other songs, filled with accusations and angst. While “drivers license” and “Skin” cover the emotional and relaxed facets of pop music, “Lie Lie Lie” spans across its more direct and angrier tones.

While many were taken aback and assumed “Lie Lie Lie” was about Rodrigo, this is unlikely, since the song was first written back in November 2019 and demoed on Bassett’s Instagram page. Instead, the song seems to be more generally about betrayed friendships and trust, rather than an angry diss track that many have believed it to be.

Despite the drama and rumors that might surround Rodrigo, Carpenter and Bassett, there’s no doubt that all three are talented and passionate about their work. While fans may continue speculating about their personal lives (even theorizing that the timing of the releases and the well-crafted lyrics were part of a joint publicity stunt), all three artists are busy working on their next projects, which we excitedly await.