Her vision is blurred, her steps are off-balance and her mind is racing from one fleeting thought to the next. After a few swigs of the bottle, she is ready. 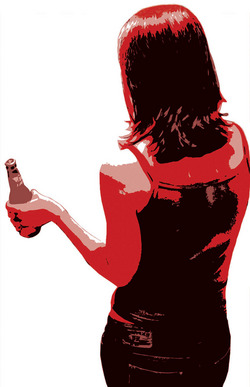 Photo:
With the fit of butterflies at the pit of her stomach now suppressed by the rum pumping through her bloodstream, Sally boldly walks up to her crush at a party during her sophomore year and throws an arm around his shoulders, initiating a conversation even though they have never spoken before.

Sally, now a junior, is usually reserved, but alcohol provides her with a confidence that she doesn't usually possess when sober.

Like Sally, many other self-conscious female Blazers are using alcohol to mask their insecurities and feel uninhibited. This burgeoning culture of "girls who are not alcoholics - yet - but who routinely use booze as a shortcut to courage, a stand-in for good judgement and a bludgeon for shyness," as Koren Zailckas writes in her memoir, "Smashed: Story of a Drunken Girlhood," is catching on. This gravitation towards drinking reflects a national trend: According to a July 2004 report by the Center of Alcohol Marketing and Youth (CAMY), an organization that studies alcohol trends, the gender gap in underage drinking has reversed; young girls are now drinking more than underage boys.

Additionally, girls are using alcohol's freeing effects as a shortcut to comfort in sexual situations, reveals Elizabeth Armstrong in "The new face of underage drinking: teenage girls," a recent article in "The Christian Science Monitor."

By abusing alcohol in these ways, Sally has joined the expansive culture of teenage girls who feel they need alcohol to act, say or do things that they would ordinarily be too self-conscious to do when sober. For a growing number of female drinking devotees, alcohol is playing a significantly larger role in their lives than in those of previous generations.

Sally, a self-described "shy person," has used alcohol as a substitute for confidence in social situations since her freshman year. For her, alcohol is a passport to temporary happiness, popularity and self-assurance. While more comfortable around boys now, Sally admits to initially relying on alcohol to fraternize with a crush or to talk to someone she didn't know. "The second boy I ever kissed was while I was drunk. It wasn't a good relationship, just a drunken hook-up situation," she says. "Drinking made everything a lot easier for me, but the relationship wasn't based on anything real, just alcohol." 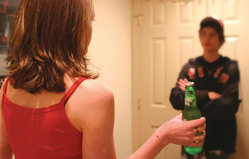 Any benefits of abusing alcohol this way, however, are outweighed by the potential of serious psychological problems that can surface, says Loren Rothstein, an employee at Orchid, a women-only rehabilitative center in Florida. "The main problem is that [these girls] don't know how to tell people what they are really feeling," she says. "They're not comfortable in their own skin."

This social unease, when combined with the "enormous pressure to have sex," writes Armstrong in "The new face of underage drinking," is often a major reason why girls drink. "The push to be sexy often goes hand in hand with the pressure to drink... Alcohol goes beyond being a tool of seduction, promising empowerment [and] liberation."

The current generation of teen girls seems to embrace the fact that drinking has become more socially acceptable for them, and they are drinking more alcohol than ever. Realizing this, advertisers have recently begun targeting these girls with enticing magazine ads. According to CAMY, girls in 2002 aged 12 to 20 saw nearly twice as many magazine ads for low-alcohol refreshers than women over 21. Teenage girls' exposure to magazine ads for these refreshers — sugary concoctions commonly referred to as "alcopops" or "malternatives" — increased by 216 percent between 2001 and 2002.

While the media has a powerful influence over girls, fellow teenage girls can be an enormous source of pressure as well. A girl's choice to drink is often influenced by whether her friends do, according to a study released by the National Institutes of Health in 2003. This research has shown that girls often begin drinking to endear themselves to other girls and are in turn twice as likely as boys to succumb to peer pressure to drink.

During Kara's sophomore year, she had friends who didn't drink, and she eventually drifted apart from them. "The one thing that my current group of friends has in common is that we like to party," she says. Many of their conversations are spent discussing the past weekend's alcohol-blurred events or planning a party for the next opportunity to drink. "It's not that I don't like [my old friends] anymore because they don't drink; it's just that we don't have enough in common and can't talk about the same things."

This casual use of alcohol as a social passageway can lead to unhealthy relationships and ineffective coping skills, says Rothstein. The growing culture of teen girls who rely on alcohol is alarming experts across the country, who are concerned with the self-image and development of these girls.

"It all starts with self-esteem," Rothstein says. "If you're okay with you, then you'll have no fear of rejection."

Katherine Duncan. Katherine Duncan is beyond excited to be in her senior year of high school. A perpetually tired, slightly spaztic girl, Katherine enjoys many things--including hanging out with her friends, going shopping and being lazy. Though she is still license-less, she has a permit (finally) and … More »