Will the NCAA gurus completely forgive Duke this week in time for the release of the standings? After all, the Blue Devils had an undefeated season and were sitting comfortably in the top spot until being ravaged by the unranked Georgetown Hoyas last week. Then, they were ungraciously unseated from their throne to number two and UConn was installed in their place. 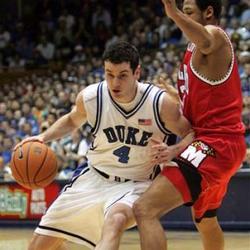 Photo: Duke's JJ Redick in a game against Maryland.

Photo: Duke's JJ Redick in a game against Maryland.

Georgetown head coach John Thompson III claims that Georgetown was just "lucky." J.J. Redick had a stunning game, scoring a career high 41 points. What does this prove? Duke has its moments when they focus and still lose everything.

The team that has been immortalized in basketball history as a formidable opponent to many is simply mortal. They have a good, experienced coach. They have experience, talent, discipline and heart. But, as with any team in college ball, they are only kids, and kids can lose their focus. Every team has its inconsistencies and every team reaps its punishment.

Flash back two years to the ACC championship game between Maryland and Duke, when Maryland stepped up and beat Duke out of sheer determination and friendly competition. Duke, which was predicted to win, had been enjoying a winning season as usual with a dependable team, while Maryland had been struggling with a fledgling team. But Redick's shots weren't going in and guard Chris Duhon's efforts were not good enough…and Maryland won. Duke, for some reason, is outperformed by other teams that take them by surprise.

That same shoddiness is attributed to the Georgetown game. Since Georgetown emerged victorious, more coaches and critics should at least reevaluate their belief that Duke is immortal. They were almost beaten by Virginia Tech, but Sean Dockery's desperate shot in the last second sealed a victory.

Everyone wants to know: how far will Duke go in March? Boston College and Illinois were undefeated around this time last season. But only Illinois actually made it to the final round of the NCAA, falling to North Carolina in the championship game. This may foreshadow this year's playoffs, since Duke once again has a strong squad and a strong record, but the season is still taking shaping out.

Georgetown is on a roll. They're on a four game winning streak, emboldened by the win against the previously top-ranked Duke. The Blue Devils have proved that they cannot always beat those "lower" teams. Every team has a chance, and the win against Duke proved just that. West Virginia was close, yet never finished the job. Georgetown finished the job and lived to tell the tale. Oh yes, it is a fairy tale for a Cinderella team that may stock up a few more wins. Being beaten by an unranked team! It is a disgrace for a team of Duke's caliber. But how many will take that into account as they hail the number one team for next week? I'd say very few. Duke is still the team to beat in the NCAA.