Representative Al Wynn's 15-year career in the House of Representatives has been marked by a series of ups and downs. After winning the Democratic primary by a little more than three percentage points over challenger Donna Edwards two years ago, Wynn lost to her by more than 20 percent in this year's Feb. 12 Democratic primary. Instead of gracefully serving out the remainder of his term, Wynn sent shockwaves throughout Maryland and Washington, D.C. by announcing in March that he would resign, effective last weekend. Instead of finishing his term, which will end in January 2009, he will join the lobbying firm Dickson Shapiro. It's as nasty as it sounds: rather than fulfill his duty to his constituents, Wynn chose to reap the benefits of his new ethically-unsound job while the people suffer the consequences for voting him out of office. 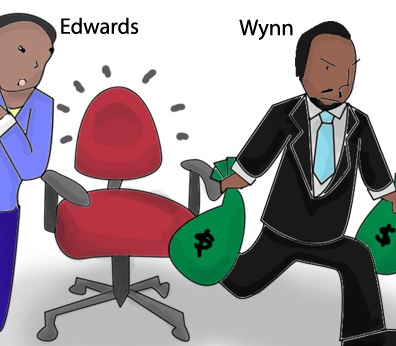 Photo: Wynn's decision leaves everyone else with few choices.

Photo: Wynn's decision leaves everyone else with few choices.

Wynn's decision has negative implications for the 662,062 citizens of Maryland's Fourth Congressional District, which includes portions of Montgomery and Prince George's County, according to the last U.S. census in 2000. Based on Maryland law at that time, which has since been amended, the Maryland State Board of Elections had to hold both a special primary and general election if it wished to fill the remaining six months of Wynn's term. Furthermore, the Board would still hold another general election in November to elect the Representative for the new 2009 term. Thus after Wynn's announcement, Governor Martin O'Malley (D) had to choose between holding special elections and leaving the seat empty for six months. Both elections would have cost the state about $2 million, according to Director of Candidacy and Candidate Finance for the Maryland State Board of Elections Jared DeMarinis, while leaving the seat empty would have left the fourth district without representation for six months. Neither option looked appealing.

In an attempt to alleviate the costs, on April 18 O'Malley signed legislation to bypass a special primary election and hold only a special general election on June 17 to find a representative for the remainder of Wynn's term. Unfortunately, Wynn's badly timed decision will still cost taxpayers around $1 million, according to DeMarinis.

Additionally, Wynn's resignation opens a Pandora's Box of ethics. According to its web site, Dickstein Shapiro is a "multiservice law firm" that represents clients in subjects including business and securities law, corporate finance and energy. Because Wynn is a moderately high-ranking member of the United States House Committee on Energy and Commerce, his new job screams conflict of interest. Though Wynn said in a statement released by his office that he is "researching potential conflicts of interest" and "will of course recuse [himself] accordingly," his abstaining from a vote in any topic that might be linked to his new job indicated he felt comfortable leaving his constituents voiceless and alone in a huge field of issues for the next two months.

U.S. law bans members of Congress and government aides from entering lobbying positions within one year of leaving public service. Constituents can't help but infer Wynn's message in his job switch – that he was stepping down early to speed his one year.

Though Wynn is certainly not the first elected official to resign before his term expires, the fact that his announcement comes a mere two months before he intends to resign is especially egregious. Wynn tried to justify his actions by stating that his early resignation will give Edwards seniority over other freshmen representatives. In a press release from his office, Wynn stated, "I also believe that giving our Democratic nominee, Ms. Edwards, a chance to get a leg up on the process through an early special election is very valuable and also very common." Though this is true, even if Edwards does win over Republican nominee Peter James in a special general election, she will only serve a measly extra six months due to the summer recess before the new term begins. Such a short length of time will not give her much experience or advantage over other new representatives.

Regardless of his motives, Wynn had a duty to his people to serve out his term. When he took the oath of office, he pledged to support, protect and prioritize the Constitution of the United States and to "bear true faith and allegiance to the same." His loyalty should be to his constituents - the very same people who first elected him to power fifteen years ago - and not to his successor or his new job. Wynn should have faithfully finished what he promised and pledged to do. Unfortunately, the people aren't at the top of Wynn's priority list, and now they will bear the consequences of his actions. The people must now get out to the polls on Tuesday to vote, showing that though Wynn has betrayed his constituents, they still believe in the democracy upon which our country is based.