"Ear to the street, pen to the beat"

His beats thunder through car stereos, his lyrics encompass complex issues and his stage antics sweep the crowds. And it all started when he bought Jay Z's "Volume 2: Hard-Knock Life" in third grade.

Hip-hop music has always played a large role in the life of Blair alum Tobi Adeoye, more recently known as his rapper alter ego, Kid Q.U.O. "I grew up in a hip-hop community, which made me a more creative person and has helped me express things on my mind," Adeoye says. 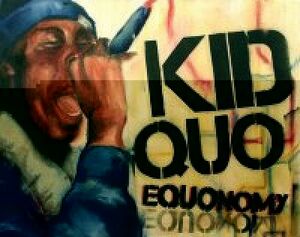 Kid Q.U.O. (Qualitative Urban Operative) hails from Takoma Park, having spent most of his childhood in a house across the street from Washington Adventist Hospital. Adeoye released his 13-track album, "The Pretty Flacco Mixtape," last September. In December, Adoeye released the "eQUOnomy EP," a six-track mixtape featuring some of his work with 2007 Blair graduate Chas "DJ Chooky" Derr. In early March, Adeoye released his first music video for his song "Stand Strong." His work only continues to expand, attracting the attention of fans as well as fellow rappers.

Living the wave
In the fall, Adeoye started school at the University of Wisconsin at Madison and has been living the college life. "Rap, chill, party, ball," Adeoye describes the scene.

At Wisconsin, Adeoye is enrolled as a freshman in the First Wave Spoken Word and Urban Arts Learning Community in the Hip-Hop Theatre Ensemble program. Currently in its second year, First Wave admits only 15 people from around the country, and allows students to study urban arts such as spoken word, theater and hip-hop music. The students in the program perform in a troupe showcase each year in addition to individual performances. "I'm optimistic about my future with the program," Adeoye says. "I'm doing a lot more group pieces which is helping me creatively."

Through the First Wave program, Adeoye has relished the opportunity to work closely with nationally renowned slam poet Rafael Casal, Creative Director of the First Wave program. Casal helped with Adeoye's "eQUOnomy EP" title track, "Kid Q.U.O." and has been consistently impressed by Adeoye's hard work and determination. "He is as any young artist should aspire to be: tireless, dedicated and focused," Casal says. "Constantly searching for improvement, and above all else, humble."

Nursing rhymes
At Blair, Adeoye was in the Communication Arts Program and played ice hockey. "Overall I'd say I was a good student," says the rapper about his Blair career. "But you know, when I became an upperclassmen I started to find the loopholes and exploit them a bit."

Adeoye first began to pursue rapping in his junior year. "I used to just pick up pen and paper and started writing," he says. 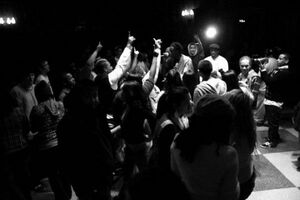 Photo: Adeoyo is currently enrolled as a freshman in the First Wave Spoken Word and Urban Arts Learning Community at the University of Wisconsin at Madison. Picture courtesy of Adeoyo.

Photo: Adeoyo is currently enrolled as a freshman in the First Wave Spoken Word and Urban Arts Learning Community at the University of Wisconsin at Madison. Picture courtesy of Adeoyo.

There were stages to his development as an artist. "I started off doing freestyles, then I started writing and working on my performance skills," Adeoye says. Although still a bit nervous at live performances, Adeoye has overcome stage fright. "Once you realize that performing live is really just talking to people, you overcome your fear," he says.

2008 Blair graduate Peter Lorenz was at Adeoye's side, helping to create his beats. "He definitely enjoyed it before he got serious," Lorenz says. "He works hard and he's got a great voice for it." Lorenz, who will attend Wisconsin in the fall, worked with Adeoye on his application to the First Wave program.

Buzz at the mic
Q.U.O., who used to go by the rap stage name One Deuce, is currently in the process of writing new material. "I sit down, get all my beats, listen to my beats," Adeoye says. "I just see how it makes me feel and once I listen to the beat long enough, I figure out what to rap."

Adeoye compares the style of "Buzz Mic Years," his album in progress, to rap hip-hop group the Cool Kids, who feature similar futuristic and progressive beats. "I'm going for beats that thump hard," Adeoye says. "As far as content, this album is going to be more about me as opposed to random things." He plans to have the album ready for a late summer release.

Pushing the boundaries
Currently, Adeoye is working his way to what he describes as a "budding hip-hop scene" in Madison. "Many kids haven't been exposed to hip-hop, so I introduce them," Adeoye says. 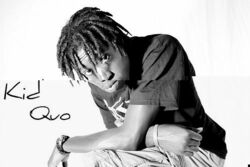 Casal thinks that Adeoye has what it takes to be successful in the hip-hop industry. "When it comes to music, Tobi is one of the most persistent and dedicated young artists I've come across," Casal says. "We can easily expect him to push the boundaries of his art form to its capacity, which nowadays is a rare characteristic to find in performing artists within hip-hop."

Adeoye considers his rapping to be an art that he can constantly improve upon. "I think I'm good, but my main goal is to become great," he says.

Whether positive or negative, Adeoye's music is simply inspired by the opinions lives of others. "I get a lot of my inspiration from talking to people," he says. "I keep my ear to the street, pen to the beat."