Fighting crime does not equate to fighting youth

D.C. faces what police chief Charles Ramsey has declared a "crime emergency." To grapple with it, on July 11, the D.C. goverment declared that the 12 a.m. curfew for all resident and non-resident teenagers 16 and younger was pushed to 10 p.m. Although the curfew represents an admirable effort to reduce the number of robberies and weapons offenses committed by young people, it is too controversial a crime-fighting tool to stand on its own. Unless officials move to support the new curfew with other anti-crime initiatives, it should either be pushed back to 12 a.m. or repealed. Furthermore, the latest anti-crime measures should also recognize the prevalence of adult crime and address the needs of at-risk adults, rather than targeting only adolescents.

Members of the D.C. Alliance of Youth Advocates and the Justice Policy Institute have criticized the earlier curfew, declaring that it points to young people as the sole cause of crime in D.C. They also urge stronger job creation and education programs to reduce adult crime. Young people are portrayed as criminals too often – in reality, they are far more likely to be the victims. According to the D.C. Police Department, adults account for 82 percent of violent crimes and more than 90 percent of arrests in D.C. 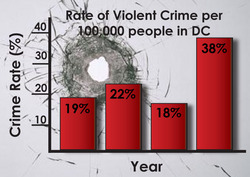 In 2005, a similar crime wave to this summer's struck D.C, claiming many teenage victims. Yet D.C.'s government did not respond with as much vigor as they have this year, and their motives for responding aptly this year are suspect. In October of 2005, there were 12 homicides in D.C. in 13 days. Many of the victims were teenagers. The Alliance of Concerned Men, an advocacy group devoted to protecting children from D.C. crime, asked that a state of emergency be declared during the 2005 crime wave andrequested $1 million for programs that would benefit at-risk kids. The city only gave the group $100,000 to use in their endeavors. But a state of emergency was declared in July 2006 after 14 killings in two weeks, including the deaths of a young mayoral candidate near downtown and of a 27-year-old British activist in Georgetown.

Although the primary problem facing D.C. is the adult crime rate, the city's focus seems to be on reducing crimes among juveniles. Clearly, if the city's priorities are flawed, the same must be the case with the strategies it has implemented to solve this problem.

To accompany the earlier curfew, $8 million have been reserved for police overtime and surveillance cameras are being installed in several neighborhoods. Mayor Anthony Williams and D.C. councilmember Marion Barry, hoping to back their words up with action, knocked on doors in Southeast Washington encouraging youths to participate in the community and find jobs. But aside from these token initiatives and a number of budget increases, there have been few true policy shifts.

Many community groups maintain that policing will not be enough to lower juvenile crime rates and that education, mentoring and keeping children busy in general are equally important. The D.C. Black Church Initiative is advocating a plan to spend close to $20 million a year to put outreach workers on the street and start conflict resolution centers.

To be fair, D.C. is doing more than simply tinkering with the curfew and police routes. As part of the emergency legislation, the D.C. Council allocated $1.25 million for youth sports, $400,000 for extended library hours and $200,000 for gang mediation, but efforts to boost youth employment and improve schools were not addressed in the legislation. D.C. has an extensive youth jobs training program and spends a considerable amount of money on child welfare and public education, $1.2 billion according to the D.C. Office of Personnel. Recent results have shown that such commendable efforts have not yielded results on crime rates and government officials have admitted that they need to do more. The overall crime-rate in the city is has decreased since 2000, but violent crime since January has jumped up by 7 percent. The rate of crime and violence in the District rose from 19 percent in 2000, to 22 percent in 2002, to a full 38 percent in July of 2006. Juvenile crime in D.C. is up from 6 percent in 2005 to 8 percent this year.

The American Civil Liberties Union (ACLU) is devoted to fighting the curfew, skeptical that the curfew will be effective in stopping crime and concerned that it will be selectively enforced because of the numerous exceptions to the rule. The ACLU filed a request under the Freedom of Information Act for D.C. police department records, including statistical data, individual curfew citations, arrest records and any policy analyses of the curfew.

The ACLU and the American Civil Rights Union have argued consistently against youth curfews, declaring that they infringe on the rights of young people to equal protection under the law. In 1998, the D.C. Circuit Court found the 10 p.m. youth curfew passed in 1995 unconstitutional, but the decision was appealed to the U.S. Court of Appeals in 1999 and the decision was reversed.

An anti-crime package with a curfew standing alone as its main initiative will be far too controversial, and therefore susceptible to repeal. The curfew is necessary, but only as part of a larger anti-crime initiative that should include broad measures to increase employment and improve both child and adult education. Without such support, the curfew will be ineffective and should be repealed.

Curfews are useful tools for preventing crime by and against young people, but adults are still responsible for the majority of offenses in D.C. Until efforts to reduce juvenile crime extend beyond policing and curfews, and until the problems of adults are addressed as well, crime will remain a problem in the District.