Lowering the drinking age is beneficial to all

Although controversy over the legal drinking age began 80 years ago during the Prohibition movement, the debate has heated up once again. Two weeks ago, presidents from over 100 colleges prepared a proposal calling for lawmakers to lower the drinking age from 21 to 18. Maryland universities that signed the statement include Johns Hopkins University, University of Maryland, College Park, Towson University and the College of Notre Dame.

This recent movement, called the Amethyst Initiative, is intended to lower binge drinking in colleges, yet many opponents argue that this outcome is not probable. On the contrary, lowering the drinking age will accomplish this goal and give way to many other benefits. In fact, as Duke University President Richard Brodhead adequately explains on the Amethyst Initiative's , the current law is dangerous for underage drinkers because it pushes drinking into hiding, heightens the risks of drinking and prevents colleges from addressing drinking with students as an issue of responsible choice. 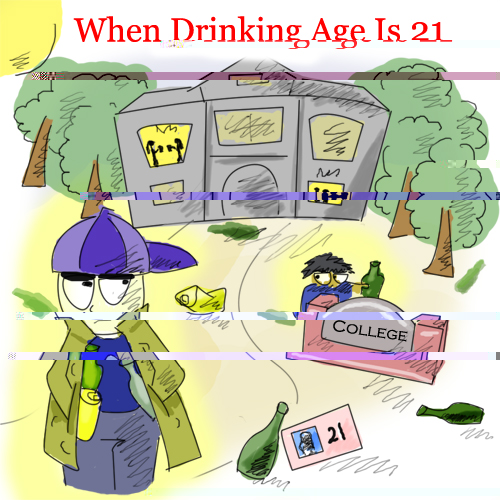 Like some other vices restricted by law, drinking is seen as an enticing forbidden fruit to youth and as a symbol of adulthood. As a result, underage teenagers who breed a cynical disrespect for the law may engage in irresponsible drinking. In fact, according to the National Survey on Drug Use and Health in 2007, 28 percent of Americans aged 12 to 20 reported that they have consumed alcohol. As in the time of Prohibition, the drinking age of 21 is difficult to enforce. Lowering the drinking age to 18 is also more practical because students at this age are generally still living with their families and not taking advantage of their freedom in college.

In fact, many college students do abuse their independence and engage in binge drinking: the consumption of dangerously large quantities of alcoholic beverages in one session. 51 percent of current binge drinkers are in the 18 to 20 year old group, according to the Center for Disease Control. This age group provides the largest proportion of binge drinkers in the U.S. Furthermore, about 90 percent of the alcohol consumed by youth under the age of 21 in the U.S. is in the form of binge drinks. From these data, it is clear that the current drinking age is not effective in keeping underage students away from alcohol.

The current drinking age also undermines the ability of colleges to send responsible drinkers into society, since they are unable to help, teach or instill in students the correct attitudes toward drinking if it is supposedly illegal. Colleges are institutions where young students prepare to enter the real world, but the drinking age of 21 is an obstacle to their guidance. "Society expects us to graduate students who have been educated," Middlebury College President John McCardell stated to Time Magazine. "But society has severely circumscribed our ability to do that." If undergraduates could legally drink, then colleges could create and enforce policies that would monitor the students' alcohol consumption.

Opponents believe that lowering the drinking age would lead to higher rates of accidents and fatality due to drunk driving, but they are wrongly attributing this to age only. Though there is a correlation between drunk driving problems and drinking age, there are many other factors that can affect one's driving behavior. Even if the drinking age was as low as 16, drunk driving could still be avoided through zero-tolerance policies, education concerning drunk driving, designated driver programs, lower speed limits, curfews and parental pressure. As long as teenagers learn to drink responsibly, they can avoid accidents, regardless of age.

Therefore, it is not the issue of when adolescents should be able to drink, but how they drink and how not to drink. As long as more efforts are put into educational programs and as long as teenagers learn how to drink responsibly early on, there will be less trouble for all in the future. By lowering the legal age to 18, not only will colleges be able to help oversee student alcohol consumption, but restaurants, taverns and schools will be able to encourage a healthy drinking environment for young people, encouraging mature and sensible drinking behavior.