"Echo" booms through the music scene

The view from the top of the World Building in Downtown Silver Spring is majestic, even on this drizzly March afternoon. The eyes of the seven men huddled in Studio 8121, however, are far from the windows. As pedestrians below hurry under raincoats and umbrellas, these seven huddle together next to mixing equipment and speakers. One of them sits at a computer, manipulating a nuanced soundwave using complex music editing software. 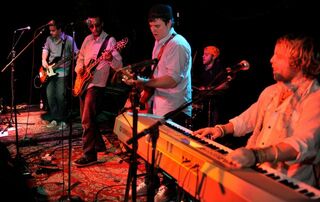 "How's this?" the man at the computer, sound engineer Mike Watert, asks. He activates the sound system with a tap of a finger. An opening trumpet rips through the room.

"Too much reverb," bassist Ryan Martinez says, standing between two speakers to get a full stereo effect.

Watert changes the soundwave again. His clicks are followed by a softer, slightly subdued trumpet.

Ryan, producer/manager David Muehlenkamp and the rest of the crew - trumpeter Sean Cooney, guitarist and lead vocalist Ben Martinez, rapper Andrew Morisey and drummer Will Whitney - are the Echo Boom, a local indie band composed entirely of Blair graduates drawn from the classes of 2001 - 2005. Despite the weather, they exude excited anticipation. Alongside Watert, they're putting the finishing touches on their new album, "No Morning In Mind." After this session ends, they'll have a final product embodying their new style, the culmination of years of effort.

Although they share the same high school, the members of Echo Boom come from many musical backgrounds. Some were inspired by popular music, while others learned in structured environments. Ben picked up the guitar after hearing "Hey Jude" by the Beatles during sixth grade. A big hip-hop fan, Morisey wanted to emulate Eminem and Jay-Z. Ben's older brother received piano lessons as a child before starting the bass. Cooney took trumpet lessons at his Montgomery County elementary school and added more instruments and musical training as he grew older.

Blair gave them all the opportunity to create new music. Ben composed during guitar class. Muehlenkamp and Whitney started making hip-hop beats during their sophomore year. Morisey began connecting with other rappers after reading an article by Muehlenkamp, then a Silver Chips page editor. "We're all very lucky to have grown up in an area where the arts are part of school," Cooney said. "We got great educations and great social and home lives that brought everything together."

The group began with Muehlenkamp and Whitney, who continued beatmaking well beyond graduation. In 2006, they brought in Ben to contribute guitar samples. With Ben came Ryan contributing on bass and their friend Morisey rapping over beats. The group, then called the Silver Lights, recorded their self-titled debut, a mostly loop-based album influence. "It was experimental in terms of figuring out our sound," Muehlenkamp says.

The group sold their album on the street and generated a local buzz while honing their sound and shifting towards live instrumentation. They caught the eye of local label Silver Sounds, which reacquainted the band with then-labelmate Cooney. "Sean came in as a guest trumpet, but when we found the element he could add dynamically, that became the new five-person base," Muehlenkamp says.

In October, the band decided to pursue music full-time, swapping their day jobs for an isolated house in West Virginia. There, they reestablished a recording routine, wrote and recorded their album and practiced their live show. "We basically went into hibernation in the middle of the woods," Ben recalls.

Yeezy and the Fab Four

In West Virginia, the band fine-tuned their style and decided on a new name: the Echo Boom. "That's one of the names they're throwing out for our generation," Morisey says. Muehlenkamp adds, "In everything we've been talking about, we want [our music] to define the sound of our generation."

The band defines itself as a rock, rap and pop group. Morisey and Whitney bring hip-hop influences. The Martinez brothers provide the rock element. Cooney adds pop-ish vocal harmonies and keyboarding. This fusion of styles crosses genres and generations. "We're taking where our parent's generation left off musically and carrying the torch on," Whitney describes. "We say it's Kanye West meets the Beatles - it's very influenced by our parents' music, but we're keeping it moving." 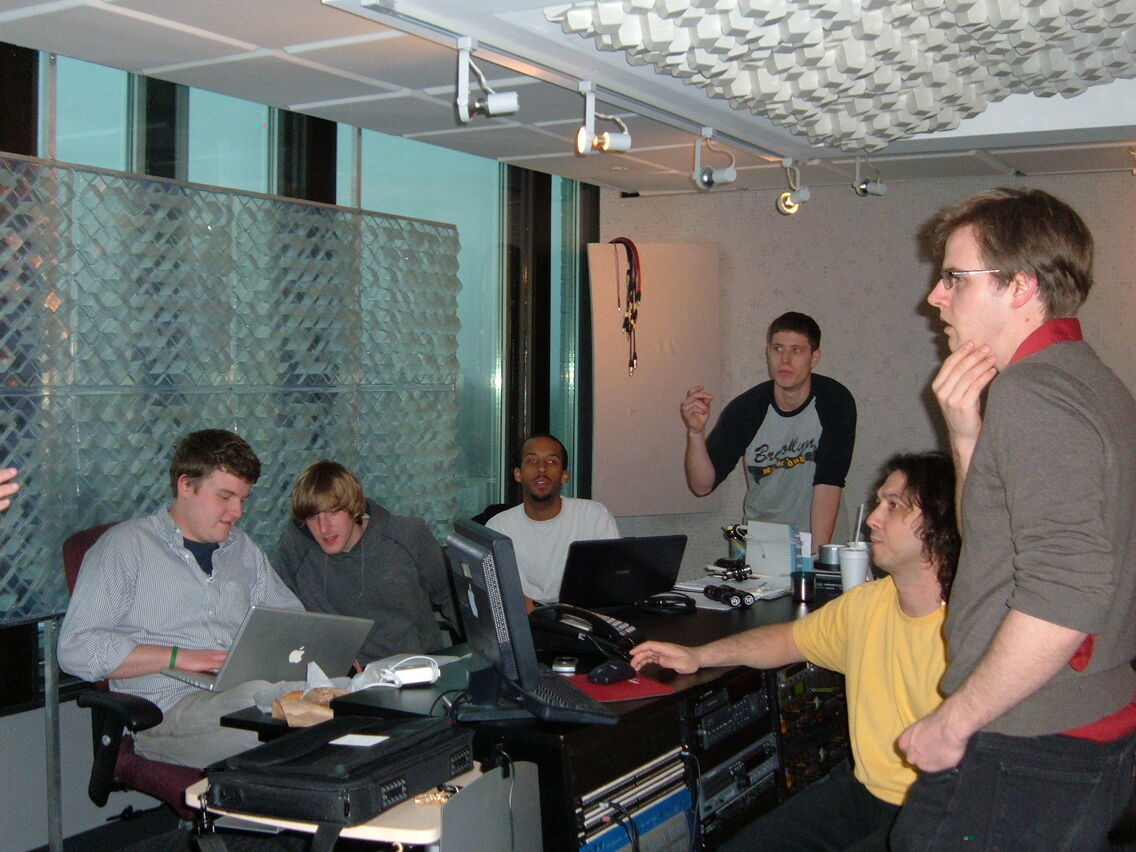 So far, they've seen some success. They've played over a hundred live shows since last October, performing in venues from Ohio to New York to Virginia and pulling in crowds of around 100 people. "Performing is probably our forte," Ben says as Cooney asserts, "We put in a lot of effort to play at 150 percent."

From a publicity standpoint, life's equally good. They've created a Myspace page with thousands of profile views and hundreds of friends. Their music is available on iTunes. Without consciously marketing themselves towards corporate distributors, they've already been contacted by major labels including Def Jam. For these guys, the sky's the limit.

As mastering ends, the Echo Boom finalizes the last part of the album – transitions between songs. Waters's fingers dance over the keyboard as the band debates the perfect fade-outs and fade-ins. Ben gives his phone's clock a quick glance and his face gains sudden urgency. "I just got a ticket!" he exclaims as he rushes into an elevator, scrambling to feed the meter and avoid an unnecessary bill.

The group dreams of making their mark on the music industry, but this ticket is a real-world reminder. Money is tight - recording an album isn't cheap and neither is the cost of living. Several members of the band have had to re-enter the workforce. The Martinez brothers are substitute teachers for MCPS, while Whitney works part-time at a Takoma Park pet store. Ryan, who's spent the most time working, has fronted most of the album's production costs, an estimated $10,000.

Making profit will be an uphill battle. The music industry as a whole is suffering from plummeting sales. According to the Recording Industry Association of America (RIAA), annual recording industry revenue between 2000 and 2008 dropped by $4 billion. Still, the band insists that money isn't the issue. "Even if we just break even, finishing this project gives a tremendous sense of satisfaction," Ryan says. Morisey agrees, adding, "This is going to be the great artistic achievement of our lives up to this point."

For the moment, the band looks optimistically to the future. As a machine burns the first completed copy of "No Morning In Mind," the guys slap hands and cheer. Cooney searches for a sharpie; the first CD will be autographed and framed. The next copy will be sent to a disc-duplication service for an Apr. 18 release date.

As the session winds down, Ben returns, thanking Watert for his work. "We really feel we've been working with the best," Ben says, smiling. Watert returns the grin. "Now sell a lot of copies and bring me back a platinum plaque."