After serving in Iraq, recruiter tackles 'the hardest job in the Army' 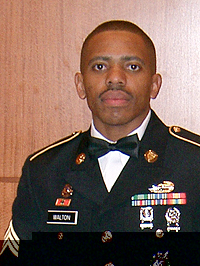 Army recruiter Richard Walton served in Iraq from 2003-2004. He is now assigned to recruit students at Blair.

Army recruiter Richard Walton served in Iraq from 2003-2004. He is now assigned to recruit students at Blair.

Courtesy of Walton
Amid endless tracts of golden desert, the solitary upright Pepsi can begged suspicion. Staff Sergeant Richard Walton knew it was laden with explosives.

In 2003, when Walton began his tour of duty in Balad, about 45 minutes north of Baghdad, the Iraq war was still in its early stages, and the primitive roadside bombs were easy to spot.

Iraq was easy compared to Walton's current deployment — the SAC. "Recruiting is hands-down the hardest job in the Army," he says. Walton, who was scheduled to visit during lunch yesterday, started working at the Armed Forces Recruiting Station on Georgia Avenue last year. His assignment: Blair.

Recruiters are selected from the top five percent of the Army based on their overall service records and performance evaluations. Walton, who rose five ranks at twice the average rate and was first in his unit at Fort Hood, Texas in both physical training and rifle range tests, was an impressive choice.

Rather than deploying someone with Walton's qualifications to the field, the Army determined that his skills would be put to better use as a recruiter. "The top five percent that has proven themselves to be able to deal with almost any situation can deal with recruiting," he says. "There's a lot of rejection, a lot of confrontations...a lot of hours and work involved."

The sergeant's experiences, both as a human resources officer and a combat soldier, have prepared him for the tough questions, hard sell and other challenges of recruiting. "I wouldn't feel right telling someone about something I didn't go through myself," he says.

Walton's story captures the essence of today's national narrative. Through him, the ripples of a distant war reach Blair Boulevard.

Born in Jamaica, Walton immigrated to Brooklyn with his family in 1994. He says he always wanted to join the Army because of his pride in his adoptive country. "The freedom that this country enjoys — there isn't that kind of freedom to be yourself [elsewhere]," he says.

On his way to work that morning at the Weill Cornell Medical Center on Broadway, Walton was just one block away from the World Trade Center when the first plane hit — so close, he says, that he felt the ground tremble with the impact.

He watched the second plane hit.

As his office was evacuated, Walton ran outside into a flurry of papers floating down from the smoking skyscrapers. He was covered in gray soot.

Compelled by "a sense of duty" to enlist, Walton went through the same process through which he now guides potential recruits, including aptitude, physical and medical exams.

A lifelong soccer player, Walton easily met the physical demands of training, but he understands potential recruits' concerns about the difficulty of boot camp. He reassures them that the Army applies a "crawl-walk-run" phased approach, he explains, because not everyone starts at the same level. Less than one percent of recruits drop out of basic training, he says.

After another eight weeks of job training, he was deployed to Fort Hood as a human resources officer, responsible for helping personnel manage healthcare benefits, payment arrangement and environmental adjustments.

Walton's tour in Iraq between 2003 and 2004 entailed a broad range of smaller missions, sometimes involving combat but usually oriented toward reconstruction. At that point in the war, the scattered insurgency was still experimenting with hit-and-run tactics, mostly resorting to small arms fire. Gunfights were rare.

Walton says his assignments were mostly humanitarian — he and his unit rebuilt homes, restored electricity to communities that hadn't had power for years, built schools and helped children. "We were giving them candy, and some of these kids didn't even know what candy was. This one kid was looking at a stick of gum like it was the best thing he'd ever seen," he recalls.

The people of Balad, located on the fault line between predominantly Sunni and Shiite regions, generally welcomed Walton and the other soldiers as heroes. He has no idea where the Iraqis got miniature American flags, but they were waving them and shouting "I love America," he recalls.

Not only were there no casualties in Walton's unit of 40 soldiers, but all 2,000 in his battalion returned home unharmed. Their only injuries were from playing football, he says, laughing.

The Iraq of 2003 that Walton describes sharply contrasts the widespread perception of spiraling violence and instability in Iraq today. Walton doesn't know if that's due to media distortion or an authentic erosion of the security situation. The area where he was stationed may have been just an anomaly. There's no way to tell.

For Walton, it's hard to distinguish between waning support for the war and wavering support for the troops, and he thinks talk of withdrawal can often dampen troops' morale. "How would you feel if you didn't feel the support of your country behind you when you're doing something so important over there?" he asks. "But being soldiers, we drive on and deal with it because that's what we do."

Anxieties about Iraq are reflected in the concerns of students who talk to Walton, he says. "The three most popular questions are 'Will I go to Iraq,' 'Will I die when I go to Iraq,' and 'If I enlist today, will I be in Iraq by morning?'"

But Walton says interest in the Army hasn't declined along with the war's popularity. Even if interest did dip, he adds, it couldn't be attributed to any one factor, such as public opinion of the war.

When visiting schools to generate interest, each branch of the military is restricted by school policy to one formal presentation, such as a booth in the SAC, per month, according to career center staff.

Walton is familiar with parental opposition to such access, but he emphasizes that he never pressures anyone. "Nine times out of 10, people that we do enlist are people that come up to us," he says.

Once students express interest in joining the Army, Walton is responsible for preliminary screening to determine if they are eligible for enlistment. Recruits must have a high school diploma, score adequately on fitness and mental aptitude tests, have no prohibitive medical conditions or chronic illnesses, not be openly homosexual and have no criminal record.

Fewer than 30 percent of 17- to 24-year-olds meet all of these requirements, according to a Feb. 14 article in The New York Times.

Despite these restraints, the Army actually surpassed its recruiting goals for 2006, but President George W. Bush, in his Jan. 23 State of the Union address, announced a bid to expand the active Army and Marine Corps by 92,000 troops in five years.

Such an increase could amplify pressure on recruiters, but Walton doesn't focus on the numbers. "I don't have in mind 'Okay, the president needs 30,000 more,'" he says. "We recruit based on a person's need for adventure, job training or help with college. If I find someone who's interested, it's my job to provide information and go about fulfilling whatever need they have."