As Americans all over the country are experiencing financial crises and segments of the United States are already experiencing an economic recession, registered voters in the 2008 election have one issue that overruns all: the economy. The economic meltdown, believed by some to be the worst economic failure since the Great Depression, is the central concern for citizens, trumping even the issue of race in the race for presidency. 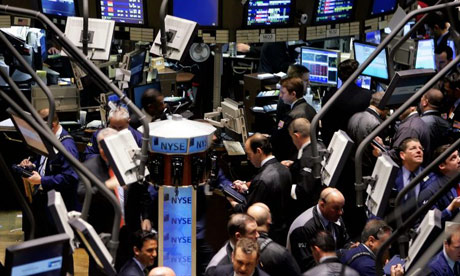 Photo: The activity in the stock market reflects the current state of the economic downturn - one that lifts Obama's chances. Photo courtesy of The Guardian.

Photo: The activity in the stock market reflects the current state of the economic downturn - one that lifts Obama's chances. Photo courtesy of The Guardian.

In less than a week, voters will be able to cast their ballots for the next U.S. President, and it's evident that racial issues are not top trepidations for voters. The concerns over America's financial status override other issues including the Iraq War and illegal immigration. A recent CNN poll concluded that 29 percent of respondents said the economy was the top issue they would consider in voting.

Six months ago, the media gave top coverage to the race issue and the history between presidential candidate Barack Obama and his former pastor, Reverend Jeremiah Wright. This made it even more prominent to the public's mind that Obama does not look like the past 43 American Presidents, not to mention he has an unusual middle name. Those probing weeks of coverage over their alleged relationship prompted me to believe that the race issue would become more poignant and popular and ravage Obama's chances of entering the Oval Office.

Thankfully, times have changed and ever since the crashing of bank giants, the downturn of stock markets, unstable Congressional bailout packages and anger from Americans, the economy has emerged at a dominant matter. Now, I'm feeling optimistic that most voters find racial issues irrelevant, or at the very least inconsequential compared to the dire mismanagement of the economy. If this presidential election were focused upon race – and the ways in which it limits our country – then Obama could not be leading in polls by discernible margins and maintain leads in GOP stronghold states. Obama holds a stable nine-point lead nationally over Republican presidential candidate John McCain, according to a Washington Post-ABC poll.

I assure you that I'm not naive, and I don't believe race doesn't matter to American voters. It's a fact that racism is alive and will affect some voters – and I certainly know it will never go away. However, it is true that race won't be a decisive factor come Election Day. Hands down, the economy is the major player. The presidential race will continue to revolve around America's catastrophic financial situations all the way past and beyond Nov. 4, with racial prejudices rambling far in the distance.