Proposed cuts will save county $2 million

In his 2011 fiscal budget, Montgomery County Executive Isiah Leggett (D) proposed police officer reductions as a means to alleviate the $779 million county deficit. Reductions in police officer positions are expected to save $2 million, according to county spokesman Patrick Lacefield. 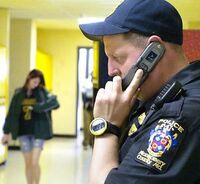 Photo: Seneca Valley High School EFO Steve Smugeresky addresses a school problem he has been working on. Sixteen county EFO positions will be cut as part of the 2011 fiscal budget.

Photo: Seneca Valley High School EFO Steve Smugeresky addresses a school problem he has been working on. Sixteen county EFO positions will be cut as part of the 2011 fiscal budget.

All 25 MCPS high schools have one serving Educational Facilities Officer (EFO). This individual plays a role in fostering relationships between students, addressing school security issues and collaborating with MCPS and the Montgomery County Police Department (MCPD). Several middle schools, such as Martin Luther King Middle School in the Germantown District and Argyle Middle School in the Wheaton District, also have EFOs.

The MCPD and the County Council have not yet decided which EFO positions will be cut. "At this time, we don't have any specific information," Assistant Principal Myriam Rogers said.

Due to the prevalence of at-risk teenage behaviors as well as MCPS's burgeoning gang problem, EFOs are becoming more involved in protecting the school community. On April 28, 2009, Springbrook High School students Anthony Torrence and Yonata Getachew attempted to detonate a bomb and set off a fire with the intent to harm staff members and deface school property. They were stopped when Torrence revealed the pair's plans to EFO Rodney Barnes.

The elimination of EFO positions may have an adverse effect on MCPS schools. "It would have some impact on developing relationships with students," Blair's EFO Officer Darryl Marshall explained. "Some students come to talk to the EFOs, so we are there to deal with certain issues." Like Rogers, Marshall has not heard which officers will be cut. "They have not come to us about what schools will be selected or affected," he said.

MCPS spokesperson Dana Tofig believes that regardless of EFO cuts, the county will still be able to address safety and security issues effectively. "It's important to note that MCPS has qualified security staff in all schools and they are trained in the handling of emergency procedures and creating a safe environment in the schools," Tofig said. "That will continue regardless of how the EFO program is impacted."

Nonetheless, Rogers speculates that Blair's size and location may prevent Blair's EFO position from being cut. "We truly benefit from having an EFO in our school, and we will continue to keep an eye on the situation," she said.