Einstein not so genius on the field

Blair rocks Einstein 6-0 in last game of the season

As the final whistle of the game pierced the air, Blair's JV field hockey team victoriously jogged off the field at their last home game of the season after crushing the Einstein Titans 6-0. This win finished the Blazer's season with an outstanding record of 7-2-2.

The Blazers wasted no time in voicing their strength as a team at the beginning of the game as sophomore stand-out Lily Alexander drove a pass to freshman Miranda Bernard who scored the first goal in the third minute of the game. Anxious for another goal, Blair's offense remained strong as the Blazers constantly drove the ball down the middle of the Titan's defense. 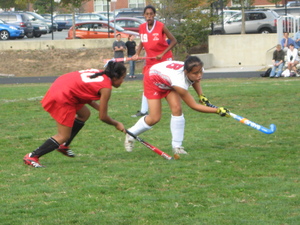 Photo: A Blazer skillfully breezes past Einstein opponent in the team's 6-0 victory over the Titans.

Photo: A Blazer skillfully breezes past Einstein opponent in the team's 6-0 victory over the Titans.

Seven minutes later, the Blazer's offensive pressure paid off with a second goal by freshman Lauren Rust from an assist by Alexander. As the Blazers eased off intense play, the game suddenly became caught in the unorganized, discombobulated and unpredictable mess in midfield. Unable to maintain possession, the half ended with a steady lead from Blair but also the threat of fast-approaching Einstein. Coach Nina Hagan reminded the Blazers during halftime to maintain constant communication in the midfield and look for the outside through-balls.

Apparently Blair took good notes on Hagan's motivated speech and played the beginning of the second half with rejuvenated motivation and strength pronounced by sophomore Samantha Lint's skillfully-placed goal. Taking advantage of Einstein's disappointment from yet another goal from Blair, Bernard scored her second goal of the night with an assist from Rust. These goals were followed by two additional goals by junior captain Neva Bowers and freshman Blake Morgan-Gamber.

Confident with their outstanding lead and distracted by the attractive preparations for the following varsity senior-night game, Blair eased off the Titans so drastically that in the last two minutes of the game, a Titan player managed to squeeze past the defense and score. The goal was revoked after the shot was ruled outside of the shooting circle.

Usually filled with forceful and intense communication, the last five minutes of the game overflowed with mixture of laughs and triumphant grins. Extremely impressed with the game, Coach Hagan commended the team's performance. "We played awesome today. We have taken everything we've learned this season and applied it to this game, so we definitely have something to be proud of," she said.

Two of the team's captains, juniors Adelaide Waldrop and Jenna Craver, agreed. "Today was a fantastic way to end the season. It was one of the best games we've played all year and it's so exciting to end on a high note," Waldrop said.

"By the end of the game, everyone was playing their best and just having fun. It was my favorite game this season by far," concluded Craver.