Student-athlete punishments should be the same countywide 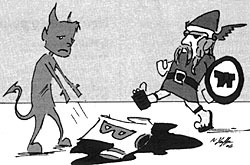 In 2004, four Blair athletes failed breathalyzer tests at the Homecoming dance. At a time when Montgomery County was experiencing a spike in teen drunk driving deaths, Principal Phillip Gainous decided that the 45-day athletic suspension, mandated in the drug and alcohol contract that the students signed, would not set a strong enough example for the Blair community. Instead, he barred the students from participating in athletics for the entire school year.

In May, when five Whitman all-star athletes allegedly robbed a Smoothie King in downtown Bethesda, three were transferred to other schools and allowed to play football despite the felony charges filed against them.

Currently, there is no county-wide code of ethics that punishes students fairly and consistently based on their offense. Underage drinking is a major community issue, but it pales in comparison to the seriousness of armed robbery. The Blair students received a comparatively harsher punishment than the Whitman students because principals exercise the discretion to make conditional decisions on punishments, creating leeway for preferential treatment. When each school's administrators are left to make their own decisions, favoritism is inevitable, usually to the advantage of affluent white athletes.

But a countywide blanket policy would be just as dangerous. Different sports vary significantly in the number of games per season and individual involvement in the team, so the loss of a small number of players could unfairly impact the rest of the team. Since a basketball season has more than twice as many games as a football season, a three-game suspension for a basketball player would have little long-term impact, while the same punishment would be almost a third of a football season.

Leaving the decision to the principal is only tenable when the school is more interested in encouraging positive behavior than protecting star players. For example, Whitman's Pat Lazear, one of the accused students, is, according to Blair athletic director Dale Miller, one of the most talented linebackers in the entire nation. Lazear was allowed to transfer schools and was elected captain by his new teammates at Wheaton.

The only solution to such situations as this is a universal county policy in which the punishment is proportional for each sport. Punishments should be equitable among schools, and principals should have less disciplinary discretion so that preferential treatment for student-athletes will no longer be a significant concern in Montgomery County.

This will hold athletes accountable for their behavior, but will not unfairly penalize the rest of the team for a large part of the season. More importantly, it will help level the inequalities between schools around the county. Montgomery County must hold athletes to a higher standard, as Gainous did. Athletes are positive role models, not just on the field but also in their schools and communities. A lax disciplinary code sends the wrong message about responsible citizenship.

Bringing equity into a countywide ethics policy will ensure that athletes are given the same opportunities but remain accountable for their actions when they step onto an MCPS athletic field. Student-athletes must be held to a higher standard both on and off the field, and this can only be achieved through a fair countywide policy.