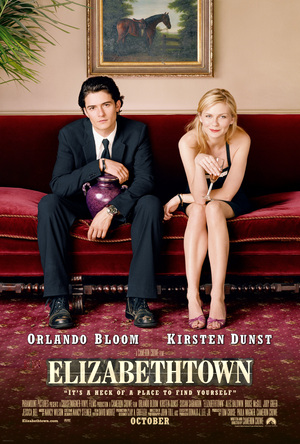 Photo:
"Elizabethtown," a romantic comedy starring Kirsten Dunst and Orlando Bloom, begins as a lovable little tale of a couple with a heartwarming connection. Unfortunately, director Cameron Crowe drives the film into the ground with more than two hours of unnecessary character development and with weak attempts to produce profound meaning from a simple love story.

The film centers around Drew Baylor, played by Bloom, a young and innovative California shoe designer whose latest creation proves to be a disastrous blunder, costing his mega-corporation heads more than $1 billion. Baylor returns to Elizabethtown, Kentucky, to recover the body of his dead father and is welcomed as an ambassador of the west coast Baylor family.

Baylor is accosted by Claire Colburn (Dunst), an overly friendly flight attendant, on his twilight flight back to Kentucky and the two keep in touch over the phone. Their strong connection develops quickly, as Colburn ends up re-routing her plans so she can stay in the Elizabethtown area.

The on-screen chemistry between Bloom and Dunst is non-existent and stagnant because of the film's atrocious screenwriting. Each line is a misplaced and awkward effort to provoke a deeper meaning lost on audiences looking for an uplifting story of love. Bloom's character narrates the story in near-monotone fashion, providing little if any insight into his character's thoughts and feelings.

Dunst's character is likeable and fun in the early stages of the film, which is a stark contrast to the dark, depressed world of Drew Baylor. Dunst's character serves as the hero of the film, saving Baylor from himself and the doldrums of his suffocating lifestyle, evident in a disturbingly uncomfortable scene of Baylor's attempted suicide via his latest invention — a knife-wielding stationary bike.

Crowe's dialogue-lacking montage of Baylor's soul-searching road trip, which spans the last third of the film and culminates in his reunion with Colburn, is completely unnecessary. Crowe and his crew do not end the film at its peak in logical sequence, instead opting to elongate the film with a lengthy yet meaningless memorial service and to dabble in undeveloped side stories.

Alec Baldwin makes a short yet memorable appearance in the film as Baylor's intimidating boss, referred to only as "Phil." Jessica Biel also pops up early in the film as Ellen Kishmore, Baylor's often-talked about yet undeveloped ex-girlfriend. Biel's sexy, sultry and snobby presence is easily disliked in favor of the genuine, fun-loving Dunst.

The most amicable characters in the film are indeed the members of the Elizabethtown community, who overwhelm Baylor with hugs, condolences and love. Baylor's interaction with Jessie Baylor (Paul Schneider), Bill Banyon (Bruce McGill) and Aunt Dora (Paula Deen) are worthy of a chuckle. However, the sometimes too intense love saga between Baylor and Colburn overshadows these characters and leaves one with a confused vision of the true direction of the film.

Despite some polished acting in spots, much of the humor in "Elizabethtown" is misunderstood because of the sappy and misguided love story. Crowe yanks viewers from scene to scene, never allowing one to be fully developed and dragging the tale on for an unbearably long time.

"Elizabethtown" (123 minutes, area theatres) is rated PG-13 for language and some sexual references.