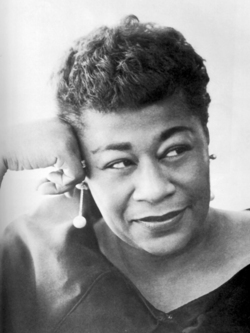 The list of Ella Fitzgerald's achievements is more than a mile long. The woman, who has been called the "first lady of song," has received 13 Grammy Awards including a Lifetime Achievement Award, recorded more than 2,000 songs, sold more than 40 million albums and earned four honorary degrees from Yale, Talladego, Howard and Darthmouth. Fitzgerald has also been attributed with being the innovator of the singing style known as "scat."

Fitzgerald was born on April 25, 1917 in Newport News, Virginia, and she grew up in Yonkers. At a very young age, Fitzgerald had a great love of music and aspired to be a dancer. After her mother died unexpectedly in 1932, Fitzgerald moved to Harlem to live with an aunt. It was in Harlem that her career in music began. She won first prize after singing at the Apollo Theater's amateur night, and in 1935, Fitzgerald got her big break when she sang at the Harlem Opera House. She was hired as a vocalist for a popular "big band" and made her first recording, "Love and Kisses," with bandleader, Chick Webb. However, it was not until 1938 when she recorded "A-Tisket, A-Tasket," a song she co-wrote, that her incredible singing talents became nationally recognized.

During World War II, Fitzgerald traveled all across the country as a solo artist and began experimenting with "scat." In 1945, she made a "scat" recording of "Flying Home." Later, in 1955, Fitzgerald became the first artist signed to the Verve recording label with which she recorded a series of songbooks. When Verve was sold to MGM in 1966, Fitzgerald signed on with Capital Records, where she delved into pop music and even released a country music album.

Fitzgerald who spent more than three decades performing virtually non-stop had to curtail her appearances in the early 1990s because of health problems caused by her diabetes. Both of her legs were amputated in 1993, and she died three years later on June 15, 1996 at the age of 79. She had been married twice and had only one son.