On January 18, Blazers filled the auditorium during fourth period to watch as multi-talented artist, Emmanuel Jal, a former child soldier, shared his life story. Jal spoke of his hardships as an 8-year-old soldier in the Second Sudanese Civil War.

Jal emerged on stage, rapping his song, "We Want Peace." He engaged the crowd by weaving in and out of the rows of Blazers, dancing. His show dived to a more somber note when he began speaking of his childhood and how the war that plagued his home of South Sudan claimed many of his relatives' lives, including his mother's.

At 8-years-old, Jal was forced to join the Sudan People's Liberation Army and fight against the central Sudanese government. Jal was one of many child soldiers, and he watched many of his friends die at the hands of both the Northern Sudanese and starvation. Repeated exposure to death blinded Jal to his sadness."It became normal," Jal said.

After watching another soldier take his life, however, Jal mentally hit rock-bottom and tried to shoot himself. His hand was too weak, so he had to prop the gun in-between his legs and pull the trigger with his toe. The shot failed, and Jal credited it to fate. Several times during the performance, Jal repeated, "I believe I survived for a reason."

Accompanied by other boys, Jal eventually managed to escape the war and had to walk a great distance to find safety. Starving, Jal raided villages and stole anything edible to survive. When villages were few and far between, he drank his own urine and ate snails and vultures. Once, one of Jal's friends was about to die, Jal's survival instincts tempted him to eat his friend after they died. "I had told him; 'when you die, I am going to eat you,'" Jal stated. He refrained when another soldier shot and killed a crow for Jal, which he devoured whole. 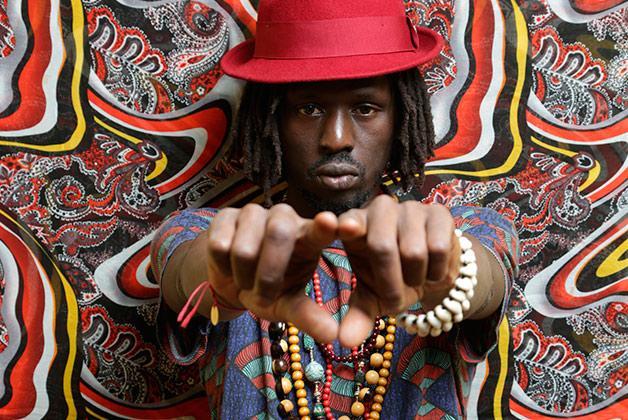 Soon after this, Jal was saved by aid workers, including Emma McCune, an English social worker. McCune adopted Jal as her own and sent him to school. Then, tragedy struck Jal again when McCune was killed in a car accident. After the accident, McCune's friends paid for Jal's schooling.

A formal education transformed Jal's life. He attended the University of Westminster in London to study in the Science, Technology, Engineering and Mathematics (STEM) field. He worked twice as hard to excel in those subjects than other subjects that came more naturally, such as history and business management. "I studied something that I was afraid of and learned how to make a solution out of it," Jal said.

Jal related his hardships to his ongoing advocacy for peace. His performance was interactive; he asked students to define courage and invited students onstage to dance with him. Micah Contee was one of the students that had the chance to dance. Contee believes that Jal connected well with the students. "He got the crowd hyped up, and the kids at Blair don't really have that motivation. That day, though, everybody was up dancing and it was great," Contee said.

Courage was a prevalent theme throughout Jal's show. He began his performance by defining courage as something that helps overpower personal fears. "Courage is the power, the force, the strength inside us that helps you overcome fears," Jal said. He then discussed how Blazers can incorporate courage into their daily lives.

While most of Jal's presentation was serious, he still made the experience more enjoyable by utilizing subtle self-ridicule, sarcasm and humor. When asked by a student what the biggest cultural difference was between his town in Sudan and America, Jal replied that he was shocked by how tall the buildings were in America, or specifically, New York. He believed that they must have been built by someone out of this world. "I thought America was built by aliens," Jal joked.

Jal plans to return to Blair in the coming years. For now, though, he is already scheduled to speak at approximately 50 schools worldwide. At every school he visits, Jal's goal is the same: to inspire his audience to find their purpose and spread peace. "Purpose is not one specific thing; it is multiple acts of kindness that you give throughout," Jal said. Contee was one student who was inspired by Jal's performance. "I learned that life can be really hard, and no matter how hard it is you can never give up," Contee stated.

Jal's performance was organized by Anne Manuel, an International Human Rights teacher at Blair, along with the Parent Teacher Student Association (PTSA), Blair principal Renay Johnson and a multitude of subject departments.

To find out more information about Emmanuel Jal go to his website.