"Enchanted" takes you to happily ever after

In a world filled with war, poverty and Paris Hilton wannabes, fairy tales are needed more than ever. Right on cue, Disney releases "Enchanted," a modern comedy about a dream princess who goes from a fantasyland to real-life Manhattan, where fairy tales rarely end happily.

Messing with the universally loved formula for fairy tales is a risk, but a gifted cast and a story that honors Disney traditions make this spoof a worthwhile trip to the theater.

Moviegoers accept that most films appear more interesting in their theatrical trailers than in their drawn-out feature length. But if the preview of "Enchanted" turned you off of watching the film, please reconsider. "Enchanted" manages to pull together each ridiculous highlight into a successful and enjoyable movie. 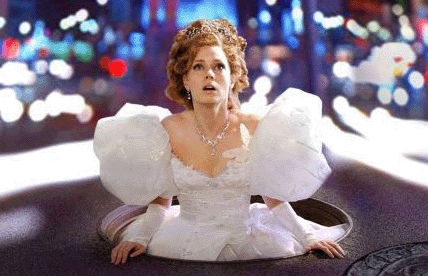 The story opens up in an animated world characteristic of Disney favorites "Snow White" and "Cinderella." The 2-D princess-in-waiting Giselle (Amy Adams) lives in a forest with talking animals and sings love songs to a prince she has never seen. While out hunting trolls, Prince Edward (James Marsden) hears her song, and the two fall in fairy-tale love. Enter the villain, Edward's stepmother, Queen Narissa (Susan Sarandon), dressed up as none other than the hag from "Snow White," out to protect her throne at any cost.

The character of Narissa is an exaggerated archetype that plays up the irrational hatred of stepmothers. She sends Giselle through a fairyland wormhole to the gritty streets of New York where our princess encounters Robert (Patrick Dempsey), a cynical divorce lawyer. Robert attempts to unravel Giselle's rose-colored view of life, but her arrival makes him realize he may not know as much about love as he thought.

Adams is tremendous in her first big-budget movie. Dressed in handmade gowns that accentuate her big eyes and small mouth, it's hard not to believe the casting director really didn't just nab her from the world of animation. But it is more than her appearance that conveys naïve innocence. Adams' girly mannerisms (how she twirls through the park) and gestures (how she delicately motions to the animals) are exactly how the world imagines princesses to act.

Adams also shows strength in her singing, which she does often enough to make the movie qualify as a musical. Three full-length songs are featured. The most elaborate, "That's How You Know," builds off Giselle singing to Robert about expressing love. Soon Jamaican street musicians join in, then elderly couples and before long all of Manhattan is singing.

The rest of the cast is just as strong as Adams. Marsden is convincing as the hopelessly self-absorbed Prince Edward who takes it upon himself to help the "peasants" of New York. Not knowing better, he gallantly stabs the roof of a city bus with his sword and declares to those riding it that they are free of the "metal beast."

Dempsey, best known for his role as Dr. Shepherd in the TV show Grey's Anatomy, captures the opposite nature of Robert with similar mastery. As a single dad, Dempsey tries to introduce Giselle to reality and reacts to her blissful lack of comprehension with the same eye-rolling disbelief audience members share.

Those familiar with Disney fairy tales will understand many references in "Enchanted," so much so Disney could have used the title "Fairy-tale Movie" (after the inventive naming of satires "Scary Movie" and "Epic Movie"). The old hag and poisoned apples of "Snow White," the helpful animals of "Cinderella," and the wake-up kiss of "Sleeping Beauty" all make appearances. The movie subtly borrows from other classics still – a restaurant named after the one in "Lady and the Tramp," and Robert's law firm is called "Churchill, Harline and Smith" after the songwriters from "Snow White."

"Enchanted" may not be full of the twists and turns characteristic of movies today, but nobody expects a fairy tale to be unpredictable. Happy endings are a hallmark of Disney as well, and perhaps this is the most critical tradition of all to observe. Fairy tales come true, even in Manhattan.

"Enchanted" is 107 minutes and Rated PG for some scary images and mild innuendo. Now Playing Everywhere