Just when you thought it was over...

On Nov. 5, 2007, Blazers across Blair Boulevard were deeply disheartened to learn that new episodes of their favorite shows would be brought to a halt. Thanks to the Writers Guild strike, which started over a disagreement with television and movie producers over how much writers should get for DVD sales and podcasts, students were forced to suffer 94 miserable days of endless piles of homework and the unforgiving semester exams without the de-stressing relief of watching fresh episodes of Jim putting Dwight's Birkenstocks in Jell-O or an actually funny "Daily Show." 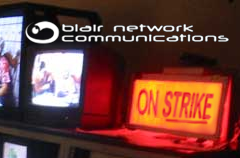 As of Feb. 7 though, Blazers can rejoice; The Writers Guild of America, East and West, and Alliance of Motion Picture and Television Producers (AMPTP) have finally reached an agreement and ended the strike once and for all. But despite this joyous news, one cannot help but worry about a potential protest a little bit closer to home: one struck up by Blair Network Communications (BNC).

No one saw the writer's strike coming, so who's to say BNC won't do the same? Considering how Blazers are absolutely hopeless with keeping track of their IDs, it wouldn't be surprising that too much money is spent on the plastic and those high-tech sticker thingies that actually keep track of how many temporaries you've had. Consequently, BNC's funds are cut for their top-of-the-line equipment. Refusing to stoop to the level of cinematography of Movie Maker-dependent YouTube vloggers, BNC decides to go on strike.

The first thing to go down will be the MCPS channel. Instead of shows that kids actually watch, like Shades of Life, Channel 34 will now be host to 24 hours of "Budget Cuts with Jerry West" and "bright" It's Academic! kids answering questions like, "Who is the only president to get stuck in a bath tub?"

Imagine going to your third period class and hoping to see a new stop motion InfoFlow intro or perhaps a parody of the Starbursts' Berries and Cream commercial, only to be let down by an intercom beep and some administrator reading off a list of announcements.

No more clever TV show tributes or awesome InfoFlow effects (c'mon, you know they're pretty cool). No more catchy ads and announcements that make you think, "Hey, this [insert club, activity or chance-of-a-lifetime here] seems really cool! I want to do it!" No more making fun of your friends as they mess up on camera. Blair as we know it will no longer be!

Okay, so you may laugh, thinking this whole situation is absurd. Or if BNC really decides to go on strike, you might find yourself not really caring that much. But be assured that the next time you see those Axe commercials, you're going to think that InfoFlow's version was way better. Or when you sit in front of the tube one Thursday night, hearing the Scrubs' theme song after what seemed to be eons, you will remember how BNC paid homage to it once and you will find yourself cursing yet another strike, sorely missing the one show that defined your weekday mornings.