"Endless wire" keeps The Who alive

The Who has a long history of rocking out, and their new album is no exception. "Endless Wire" is the sum of all of the parts, reminiscent of their glory days but hinting of a new maturity. The CD is definitely worth a listen.

For the typical Who fan, news of the planned release of "Endless Wire" sans drummer Keith Moon, who died in 1978, and bassist John Entwistle, who died in 2002, evoked a mixture of hope and dread. The Who remained one of the few classic rock bands who resisted the urge to capitalize on their popularity by choosing not to follow in the million dollar footsteps of the Rolling Stones with endless tours and rehashing old hits.

Daltrey's voice has aged noticeably, and the absence of both Moon's demonic fervor and Entwistle's masterful basslines are at times disheartening, but The Who have managed to turn out a notably strong album. Drawing from every stage in their career, the album is almost a summary of their history.

From their 1965 debut, "My Generation" onwards to this year's "Endless Wire," The Who have left their mark on rock 'n' roll. Their invention and popularization of the rock opera with 1969's "Tommy" led to other epic creations like David Bowie's acclaimed "The Rise and Fall of Ziggy Stardust and the Spiders From Mars" and Pink Floyd's "The Wall."

Townshed's fascination with the rock opera is visible on this album as well, the second half make up his latest experimentation in that genre, "Wire & Glass," based on his novella, "The Boy Who Heard Music." The tracks on the new album range from the Baba O'Riley-esque synthesizer on "Fragments" and "Fragments of Fragments," to the catchy lyrics and simple melodies of "Mike Post Theme," "Endless Wire" and "We Got A Hit" that bring to mind earlier power-rock classics like "My Generation" and "Can't Explain." 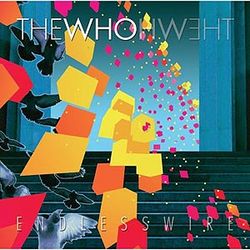 To say that The Who have remained unaffected by the passage of time would be a stretch. The strain on Daltrey's voice is readily apparent, especially in comparison to his earlier clarity and strength. No longer can he manage the screams and soaring vocals that were formally his trademark. However, the beautiful singing on "Trilby's Piano" and "Black Widow's Eyes" show that his skills are still there.

Remarkably, Daltrey and Townshed effectively replaced Moon and Entwistle with Zak Starkey and Pino Palladino, creating a different feel to the music, though some of the changes are a direct result of the fact that The Who are aging. The lyrics are more contemplative and passive, and the volume has gone down more than a few decibels.

Despite their new sound though, the new album is still astonishingly complete. With the exception of specific imperfections, the rock-opera story of Ray High, Gabriel, Josh and Leila will sweep you off your feet. This is a time when classic rock is often more of an industry than a genre and teenagers wear shirts sporting the names of bands that were popular in their parents generation and haven't been given airtime on the pop stations for decades. As classic bands like the Rolling Stones and Tom Petty charge obscene amounts of money to fund their seemingly endless tours, it is encouraging to know that The Who can still make original music.

For old times sake, a concert DVD is included with the new album, "Live at Lyon." It showcases five songs, mostly classics, barring "Mike Post Theme." The performances are strong, and, after all this time, watching Daltrey wail and Townshend power through "Baba O'Riley" is still exhilarating.