Among the first political advertisements to hit Maryland during this presidential election was an attack ad, "You've Heard It All Before," released June 4 by the Obama campaign. The ad criticizes Mitt Romney's record as governor of Massachusetts, using his state's ranking at 47th in job creation to support the advertisement's slogan, "Romney economics - It didn't work then and it won't work now." Despite this advertisement, campaigning in Maryland so far has been minute when compared to that of other states.

In May, the Obama campaign and the political groups supporting Romney each spent $20 million on ads to target only nine or 10 swing states. This number is tiny compared to past races. In 2008, for example, Obama's first advertising initiative advertised in 18 states during the month of June, twice the amount that the campaign targeted last month. 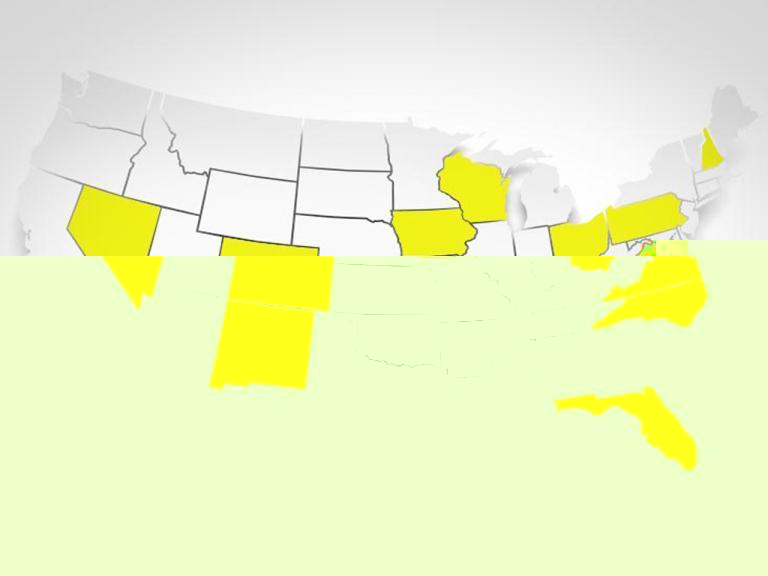 Photo: Above, the "Swing States" in this election, some of which are heavily barraged with campaign ads.

Photo: Above, the "Swing States" in this election, some of which are heavily barraged with campaign ads.

The highly concentrated spending on either side is coming with a barrage of attack advertising and in the confusion of these ads, journalists are repeatedly asking the same question: what parts of the President's and Romney's records are "fair game" to criticize? Hopefully, we in Maryland will be exempt from this idiotic questioning just as we've been spared the flood of ads.

One attack initiative receiving a lot of "fair game" criticism from reporters is a series of internet advertisements released by the President's campaign. These ads attack Romney's work as Chief Executive Officer of Bain Capital, a private equity firm that typically buys financially unstable companies and renders them profitable. Because Bain has a reputation for callously laying off workers and cutting pensions and salaries, it has garnered negativity from those who call it a "robber baron" type firm, or a business which uses criminal means to make a ton of money.

Bain certainly does make a ton of money. One of Obama's ads, "Romney Economics: Job Loss and Bankruptcy at Ampad," examines the layoffs that resulted when Ampad, a company affiliated with Bain, bought another company called SCM and closed a factory in Marion, Ill., causing workers to lose their jobs and retirement pensions. According to the advertisement, Bain Capital made a $100 million profit off of their investment. A former SCM employee interviewed in the ad felt this discrepancy in profits. "To me, Mitt Romney takes from the poor and the middle class and gives to the rich. He's just the opposite of Robin Hood," the employee said.

In response to these advertisements, media outlets have questioned if criticizing Romney's ties to Bain Capital is "fair game." Some news services, such as FOX News, have called the Bain criticism a distraction. President Obama deflected these criticisms. "This is not a distraction. This is what this campaign is going to be about," Obama said. "When you're president, as opposed to the head of a private equity firm, then your job is not simply to maximize profits. So, if your main argument for how to grow the economy was 'I knew how to make a lot of money for investors' then you're missing what this job is about."

Jon Stewart summed it up best on Thursday in a segment called "Fair Factor." Comparing the advertisement's examination of Romney's past to the reasonable assessment employers give their employees, Stewart asked, "Is it fair to judge job applicants on prior work experience?" His statement captures the ridiculousness of the media's questioning the relevance of a candidate's past.

Ultimately, this obsession over which points are "fair" to discuss and which are not is just an added distraction from the real divisive issues that this election should be about. Given that our country is so polarized on certain subjects, reporters need to cut the "fair game" analysis and accept that this election is going to get a little messy.