Enter the world of "Narnia"

Fantasy fans may have noticed the absence of genuinely good fantasy films after the final installment of "Lord of the Rings" left theatres two years ago. Thankfully that void has been filled by the impressive "The Chronicles of Narnia: The Lion, the Witch and the Wardrobe."

The first book in the "Narnia" series, penned by C.S. Lewis, details the adventures of the four Pevensie children. Peter (William Moseley), Susan (Anna Popplewell), Edmund (Skandar Keynes) and Lucy (Georgie Henley) travel to the magical world of Narnia via a majestic wardrobe. There they learn the land has been ruled by an evil witch (Tilda Swinton), who keeps the land in a perpetual winter. According to a prophecy, the children must battle her with the help of the lion Aslan (voice of Liam Neeson). Only then can Narnia be freed from its eternal winter. 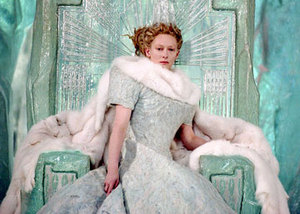 Photo: Tilda Swinton plays the The White Witch, sitting on her throne in "The Chronicles of Narnia: The Lion, The Witch and The Wardrobe."

Photo: Tilda Swinton plays the The White Witch, sitting on her throne in "The Chronicles of Narnia: The Lion, The Witch and The Wardrobe."

"Narnia" takes many cues from "Lord of the Rings" on how to make a fanciful story appeal to people of all ages. Like its Oscar-winning predecessor, its beautiful landscape shots were filmed in New Zealand, and its realistic talking-creatures were created by the production group WETA. A movie filled with talking creatures and fanciful beasts could have easily gone awry; however, in the capable hands of WETA, beavers and wolves jabber on in perfect English while fauns and centaurs battle in seamless animation.
Swinton as the false queen of Narnia is spectacular in her performance. She is fierce and unsympathetic; this is truly an evil villain. Her every word glitters with malice and barely controlled rage.

The other actors in the film, surprisingly, don't let themselves be overshadowed by Swinton's performance. Good child actors are often hard to come by, but director Andrew Adamson struck gold with his four protagonists. The two younger actors, Henley and Keynes, are stand-outs; they deliver mature and empathetic performances without giving the standard performance of being cute and precocious. Henley brings wisdom beyond her years to the role of youngest sibling Lucy, who discovers the wardrobe. Keynes is sympathetic as Edmund, the jealous younger brother who betrays his family for a tray of Turkish Delight. Edmund could easily become one-dimensional, but Keynes makes his character smolder with resentment toward his siblings and yearn for a way to distinguish himself.

The million dollar question about "Narnia," it seems, is exactly how religious it is. The film has been marketed as both secular and religious to different groups, and that's exactly the beauty of it. It is no secret that Lewis put Christian symbols in his book, but he also didn't mean it to be read as a strict Christian allegory. The film is neither overtly religious nor overtly non-religious; it can be read any way the viewer wishes. The values in the story are not peculiar to the Christian faith; they are universal.
Adamson brings to life a beloved children's novel and opens up the world of Narnia to those who may have never read the book. He has remade a classic with great love and attention that shows in every scene.

"The Chronicles of Narnia: The Lion, the Witch and the Wardrobe" (140 minutes) is rated PG for battle sequences and frightening moments.