Alumnus scheduled to speak to students on Friday

During fourth period tomorrow, singer and songwriter Eric Hutchinson will be speaking to Blair students about his time in high school, the start of his music career and music video production. His visit, which was organized by English resource teacher Vickie Adamson and Media Literacy head Michael Horne, will take place in the auditorium. 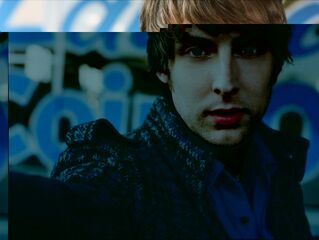 Photo: Musician Eric Hutchinson is a graduate of Blair's class of 1998.

Photo: Musician Eric Hutchinson is a graduate of Blair's class of 1998.

Hutchinson, an alumnus of the class of 1998, has created a successful career writing and performing music. He is described as having a light, mellow rock style with witty and thoughtful lyrics. His album, "Sounds Like This," reached top 10 status on iTunes in 2007. Hutchinson is currently on tour, and is speaking at Blair on Friday morning before he performs at American University that evening.

The presentation will begin with a viewing of two of Hutchinson's music videos and at the end of the visit, Hutchinson will sign merchandise and take pictures with students. According to Adamson, the presentation will be relatively short, followed by a 30 minute question and answer session. "We want students to ask a lot of questions," Adamson said.

Adamson said that she got in contact with Hutchinson through his younger sisters, who also went to Blair. Hutchinson was supposed to visit Blair during academy week, but this winter's snowstorms forced a cancellation, according to Horne.

Students signed up for a place in the auditorium on Monday and Tuesday, and a few students were allowed to sign up on Wednesday. Tickets to Hutchinson's performance at American University are restricted to university students, but the musician made six tickets available for Blair students. The ticket winners, selected by raffle, are Chloe Sheridan and Julia Skolnik, Claire Teitelbaum and Rebecca Novello and Phil Kavuma and Michael Strautmanis.

Adamson hopes students learn about the process and years of hard work that goes into building a career like Hutchinson's. "His story has an element of fortune mixed with talent," she said of Hutchinson. "It's just great he's willing to come here and do so much for Blair students."