Escaping from problems into disorder

Lucas walks down the street, a nervous feeling increasing with every new step, rain pelting down on him. Anxious thoughts bounce around in his head as he contemplates where to go, what to do and whom he can trust. Whether he turns back now and returns home or keeps traveling, his actions will stay with him for the rest of his life. Running away always does.

According to Runaway Lives , a web site documenting personal accounts of runaways, 1.5 million teenagers run away or are sent away from home by parents annually. Of these teens, nearly 68 percent are between the ages of 15 and 17. At Blair the problem is equally evident: a poll conducted on the 22nd and 23rd of November revealed that 53 percent of Blazers have themselves run away from home or know someone who has, surprisingly high figures for such a protected community. 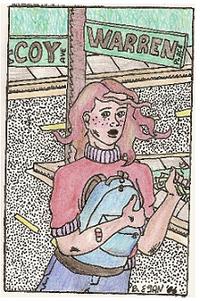 When sophomore Noelia Gonzales was caught smoking after school by police in May 2005, she knew she was in trouble. After her strict mother lectured her about it, Gonzales decided to leave home. She was away for three days before a friend arranged for her and her mother to talk and heal their relationship. "[She] started talking to me…I started crying. I didn't want to see my mom suffer like that," Gonzales recalls.

For most teens, the act of running away is almost always a quick choice, an unplanned idea. Movies like "White Oleander" and books like "My Side of the Mountain" have romanticized running away, turning it into a visionary escape from the world; a chance to embrace adventure. With this image in their mind, most teens forget to bring adequate clothing, money or maps. Such as Lucas, who only had $20 and a bus ID, many teens forget the necessities, forcing them to turn to youth shelters and aid centers. "Many will leave home quickly and will take as little as possible…we're working at improving our teen prevention program," asserts Trish Derby, an executive director for Child Find Ontario, promoting aid programs in her area.

With increasingly stressful work loads and family lives, many teens are seeking refuge - away from home, away from their problems. Positive Alternatives , an online mentoring web site, states that 42 percent of teens leave home in response to family problems, school and peer pressure are the second most common cause.

Derby, whose aid program is based in Canada, cites similar reasoning behind running away. "Most teens run away from home due to issues they may be facing at home," she explains, "they usually feel that running away is the only choice they have." Although further reasons include physical abuse and drug abuse, those reasons are less common.

Lucas, a junior, clearly remembers the day in eighth grade when he decided to run away from home. After he and his mother had a fight, he left home for three days, staying at his doctor's office and his friend's house until he decided to return because he had run out of supplies. His escapade from home was a spur-of-the-moment decision, landing him stranded in the middle of several cold rain-storms, he says.

When he finally chose to return home, Lucas's mother was so relieved that she didn't punish him. "[She] was so worried, she wasn't even mad," Lucas recalls, explaining that he feared his mother had called the police. Although the memory of his escape has faded slightly, Lucas still feels it was justified.

For Lucas, his experience is long over and his family problems have settled, but for freshman Edward, the change of life caused by running away is still a constant factor in his daily life. After leaving his mother's house mid-November, Edward sought refuge at his father's house, staying there for weeks without any regret.

Although Edward does not encourage other teens to run away to solve their problems, his personal experience has given him additional insight on the issue. "If you know the circumstances you [are] in and you know the ones you are going to are better," says Edward, only then is running away an acceptable action.

According to Derby, who encounters a variety of different runways in her profession, this view is commonplace among many teens. "Some convince themselves that this is the right thing to do, so they have no regrets," she says. She also explains that there tends to be a correlation between the length of the time away from home and how much they regret their departure.

Although some teens find that leaving home helps them work out problems and reduce stress, others feel that running away causes more trouble than it solves. After sophomore Ann left home for a week during winter 2004, her outlook was changed drastically.

At first, Ann stayed at a friend's house, but soon returned home after realizing that she missed her mother too much. After returning home, Ann discussed her feelings with a guidance counselor and resolved the underlying problems. Her newfound feelings have considerably changed her outlook towards teens who run away. "Don't run away," Ann asserts, "because it's stupid and ignorant. Solve your problems and be mature."

Although, for some teens, like Edward, running away is a plausible and successful action, others find that it tends to cause more problems than before. A variety of different internet advice web sites and 24-hour hotlines, dedicated solely to the prevention of teens leaving home, exist. While the web sites tend to provide more statistical data than personal advice, the hotlines are very informative and useful.

Experts say that leaving home should be a final choice, done only when all alternatives have failed. "While there are no guarantees, it is important that teens who are considering running away be made aware that there are other choices they can make —they don't have to run away," explains Derby. Derby clarifies that teens who are hasty about their departure often fall victim to sexually exploitation and delinquent activities.

Harsh conditions generally motivate teens to return home, in fact Clare, a freshman, cites her return home as a result of the "big scary people" she encountered while she was away. Derby elaborates that these conditions, although harsh, are effective at returning teens home. "They will return home because they have been frightened by what they have seen or experienced while living on the street or they may have been threatened in some way," she says.

The hardest part isn't always finding a place to stay or means of transportation, it can be the act of leaving. Being balanced between choices and responsibility is the most difficult, explains Gonzales, who regrets her actions half a year ago. "The hardest part was deciding to walk out... should I or should I stay?" she remembers, "That was the hardest part."