Even the president needs a break

Imagine a school year with no summer vacation. Classes all year round, without any breaks, constant homework and never-ending grade reports. Now, imagine that you have magically gotten about 30 years older, your appearance has changed quite a bit and you are living in a big white house on Pennsylvania Avenue. Yes, you're the President of the United States! Congratulations! But instead of racing to raise that "D" in Calculus by the end of the quarter, you're trying to get a country out of billions of dollars of debt, attempting to solve conflicts in the Middle East, facing constant criticism and, on top of that, trying to raise a family. 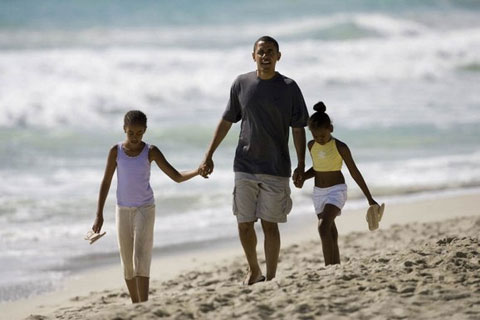 Photo: Obama is shown here on vacation in Hawaii in 2010. He has received much criticism for his 2011 vacation to Martha's Vineyard.

Photo: Obama is shown here on vacation in Hawaii in 2010. He has received much criticism for his 2011 vacation to Martha's Vineyard. Photo courtesy of whitehouse.gov.

In recent weeks, President Obama headed off to Martha's Vineyard for a 10 day vacation with First Lady Michelle Obama and their two daughters, Sasha and Malia. They rented a large house on the island off the coast of Massachusetts known for attracting the East Coast elite and spent time together playing golf, going out for ice cream, reading and trying to relax amid what one can only imagine are stressful times for the President of the United States.

However, President Obama has received criticism for taking a vacation in tough economic times. The Republican National Committee released 18 different postcards with pictures of Obama adorned with captions including, "Finding a wave in Martha's Vineyard is almost as hard as finding a job," and "I hope I bowl higher than my approval rating."

But Obama's vacation time doesn't even compare to past presidents'. According to CBS News, by the third year of their terms, President Reagan had taken 112 days of vacation and President Bush had taken 180. Meanwhile, in the third year of his term, President Obama has taken only 61 days of vacation. Just like any other human being, Obama needs a break from the stress of his job and everyday life. Critics should realize that Obama's vacation time is significantly less than previous presidents', and be satisfied with that, rather than criticizing him for taking a bit of time off.

When people think of vacation, they picture lazy days at the beach or carefree walks among the mountains. Vacations are supposed to be breaks from the frenzy of everyday life - a break from jobs, from school (except for the occasional summer homework) and a time to regain a readiness to get back to work. However, presidency is a full time job and even while on vacation, Obama needs to be aware of his actions and how they will come across to Americans. In a sense, Obama is never really on vacation; wherever he goes, the responsibilities that come with his title follow him. Obama recognizes this and brought along presidential aids and advisors to Martha's Vineyard so that he could continue working while managing to relax with his family. This kind of contradicts the purpose of a vacation in the first place, but when duty calls working while on vacation is a responsibility that he must uphold, and he does.

Just as students going back to school in a week should be refreshed and ready to work hard after 10 weeks of summer, Obama should be more ready to take on his responsibilities after having a short time of relaxation. In the end, Obama's vacation will prove to be beneficial for everyone – he gets some time to relieve stress and Americans can be more confident that he will handle his responsibilities with a fresh mindset.