With just over a minute remaining in overtime of Sunday's NCAA Regional Final in Washington, D.C., George Mason guard Folarin Campbell drained a baseline jumpshot to put the Patriots ahead of #1 ranked Connecticut by four — a lead that GMU would not relinquish on their way to a Final Four berth. But less than three years ago, before Campbell was lighting up the scoreboard on the national stage (he dropped 15 points against the Huskies), he was wreaking havoc on the Blazers as a member of Blair's arch-rival from a few miles up the road, the Springbrook Blue Devils. 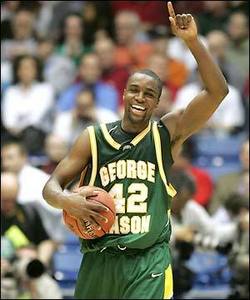 In his high school basketball career, Campbell dominated the fiercest rivalry in Montgomery County: Blair vs. Springbrook. He scored 38 points on the Blazers in a standout senior performance in January of 2004, as Springbrook rolled to an 81-51 victory. Later that month, Campbell dropped 21 on Blair on the Blazers' home court, and the Blazers have yet to regain power over the Blue Devils in the series' post-Campbell era.

The 6-foot-4-inch, 200-pound combo guard accepted a scholarship to play at George Mason despite being recruited by several elite basketball programs, including Providence University. Campbell's decision has turned out to be a good one, as the Patriots became just the second #11 seed to reach the Final Four in the NCAA Tournament's history, beating perennial powers Michigan State, North Carolina and Connecticut along the way.

The Silver Spring native averages 11 points, 3.5 assists and 4.3 rebounds in 31 minutes per game for the Patriots, who will face Florida in the National Semifinals on Saturday. Campbell will now take center stage, as he and his GMU teammates have reached the pinnacle of NCAA basketball. He will likely rely on the same silky smooth jumper, tenacious defense and crazy athleticism that plagued Blair's basketball program for years in the 4A East division to pacify the agile, aggressive Gators.

As a Blue Devil, Campbell notched First Team All-Met honors in 2003 and 2004 after averaging 26 and 28 points per game in his junior and senior seasons, respectively. And the ex-Blazer killer certainly left his mark on Montgomery County basketball, topping 33 points 10 times from 2002 to 2004, including an astounding 51-point performance in a win over Richard Montgomery in February of '04.

"The most impressive thing about Campbell was his demeanor," recalls former JV boys' coach and varsity assistant Richard Porac. "Whether he scored 30 or 40 points a night or whether he couldn't hit a shot he kept his cool on the court."

Anyone in attendance at one of Campbell's games remarked his amazing athleticism and incredible abilities. "He was just on a different level physically and mentally," says Porac. "You could tell that [Campbell] was ready for Division I ball, just from the way he carried himself and the way he looked physically — he was intimidating."

Every player in George Mason's starting five (Jai Lewis, Lamar Butler, Tony Skinn, Will Thomas and Campbell) is from the state of Maryland, and point guard Skinn was born in Takoma Park.

This weekend, Campbell and his Mason teammates will look to add a national title to their improbable run in the NCAA tournament, and if the ex-Blue Devil can duplicate his early-round performances — and maybe add a touch of his high school stardom to the mix — the Patriots will have a shot at making history. And though he deserves his proper recognition, don't get it twisted — he's still from Springbrook.