During Magnet Arts Night, the auditorium was bursting with people. All seats were occupied and some people had to stand in the back and in the aisles. The audience grew silent as senior Sarah Peitzmeier delicately moved her fingers across the keys of a grand piano performing "Ballade No. 4 in F minor, Op. 52" by Frederic Chopin. The piece officially began the 2006 Magnet Arts Night held yesterday at 7:30 p.m. in Blair's auditorium. 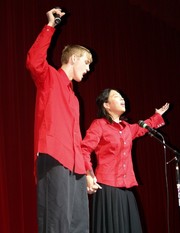 Photo: Christopher Silberholz and Mindy Or sing "Take Me as I Am" from the musical "Jekyll and Hyde." (click picture for gallery)

Photo: Christopher Silberholz and Mindy Or sing "Take Me as I Am" from the musical "Jekyll and Hyde." (click picture for gallery) Photo courtesy of Zoe Norvell.

At the conclusion of Peitzmeier's performance, the Masters of Ceremonies, junior Timothy He, sophomores Alex Beede and Zack Pinsky and freshman Bryan Huang, came out to crack jokes and introduce Magnet Arts Night.

This first act was "Chameleon" by Herbie Hancock, performed by Hamster Huey and the Gooey Kablooies. This act featured junior Andrew Bort on the electric piano, freshman Jonathan Gootenberg on the trumpet, junior Patrick McQuighan on the baritone sax, senior Max Morowski and sophomore Song Fu on the alto sax, junior Mark Harding on the trombone, senior Jeremy Goodman on the guitar and juniors Eleazar Rubenstein on the drums and Shaagnik Mukherji on the bass. This jazz piece was an electrifying compilation of solos of each member in the band, and an upbeat way to kick off the art performances.

After another series of jokes from the emcees, the stage lights darkened to a semicircle of dark blue forming the silhouette of Alice Fan, slightly bent with her arms extending on either side. As the music started, she began to move her arms with such agility and grace, they seemed to be made of pieces of cloth moving gently in the wind rather than of bone. The lights brightened, allowing a view of Fan's extraordinary costume, colored blue and white with the pattern of peacock feathers. The dance was beautiful and Fan carried herself elegantly, symbolizing the poise of the peacock. 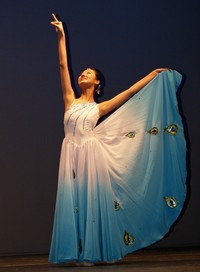 Photo: Junior Alice Fan concludes her traditional Chinese peacock dance, in which she gracefully mimicked the movements of the elegant bird. (click picture for gallery)

Photo: Junior Alice Fan concludes her traditional Chinese peacock dance, in which she gracefully mimicked the movements of the elegant bird. (click picture for gallery) Photo courtesy of Zoe Norvell.

One popular dance included a scene from the film "Napoleon Dynamite," with senior Alex Brown as the title character. Brown appeared on stage in full Napoleon costume, including a bright red wig, to try his hand at the movie's famous dance scene. Later in the skit, Brown had a dance-off with senior Andy Jiang, to the delight of the audience.

Concluding Act I was a skit entitled "The Magnet Love Story." This skit followed a magnet student, played by senior Samir Paul, as he tried to win the affections of a girl named Stacey Wong, played by senior Yuning Zhang. The skit ended happily, with the cast dancing to "I'm a Believer." The skit was funny and witty as the actors made fun of magnet students and their inability to find love.

Sophomore Chao Xue performed "Six Metamorphoses After Ovid" by Benjamin Britten on the oboe for the prelude to Act II. Other instrumental performances included "Hungarian Rhapsody No. 2" by Franz Liszt played by Lance Zhao and a Mongolian folk song, played by sophomore Esther Kim at the drums, Xue at the flute and junior Merlyn Deng, freshman Sally Huang and senior June Hu at the Chinese zithers. 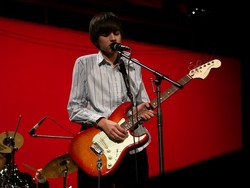 sophomores Jasleen Salwan and Poorva Singal and freshman Debattama Sen. Similar to Fan's beginning of her peacock dance, this opened with the girls silhouetted against a blood-red background, every other girl crouched down while the others stood. Their brightly colored clothing called salwar-kameezes illuminated the stage as the girls twirled and danced their nicely choreographed performance.

Although the night consisted mainly of magnet student performers, the show was not all about the students. Science teachers Robert Donaldson and Daniel Levin performed "Long Black Limousine" on guitar with senior Linden Vongsathorn as a vocalist along with Donaldson and Levin. Donaldson explained that the song cautions people to be careful for what they wish for.

To mix up the show during Act II, seven students performed martial arts. Each had tremendous skill and as they executed the skills, their hands, arms and legs moved in a whirlwind. 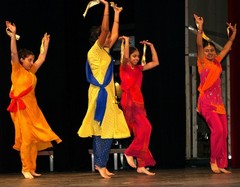 Photo: A group of girls performs a Bhangra Indian dance.

To conclude the show in a memorable and uplifting manner, "YMCA" by the Village People was performed by junior Andrew Bort on drums and seniors Michael Arbit on trumpet, Will Ardanuy on trombone, Pratik Bhandari on guitar and Brett Holbert and Joe Dario as the vocalists. Each was wearing costumes made famous by the Village People. This act was the last big bang of the performance and was full of energy. All seniors were called up on stage where they danced to the song and showed their senior pride.

The conclusion of the spectacular night of talent and love for music, dance and culture ended with a huge applause from the audience and excitement of all the participants in the show. As in previous years, this night of artistic abilities was a great success.