On Friday evening, windswept Blazers, parents and supporters trickled through the doors of the Student Activity Center (SAC) to the tune of Blair's a capella group, InToneNation, performing a rendition of MIKA's "Lollipop." The song set the mood for a night filled with lyrical, comical and downright talented performers. 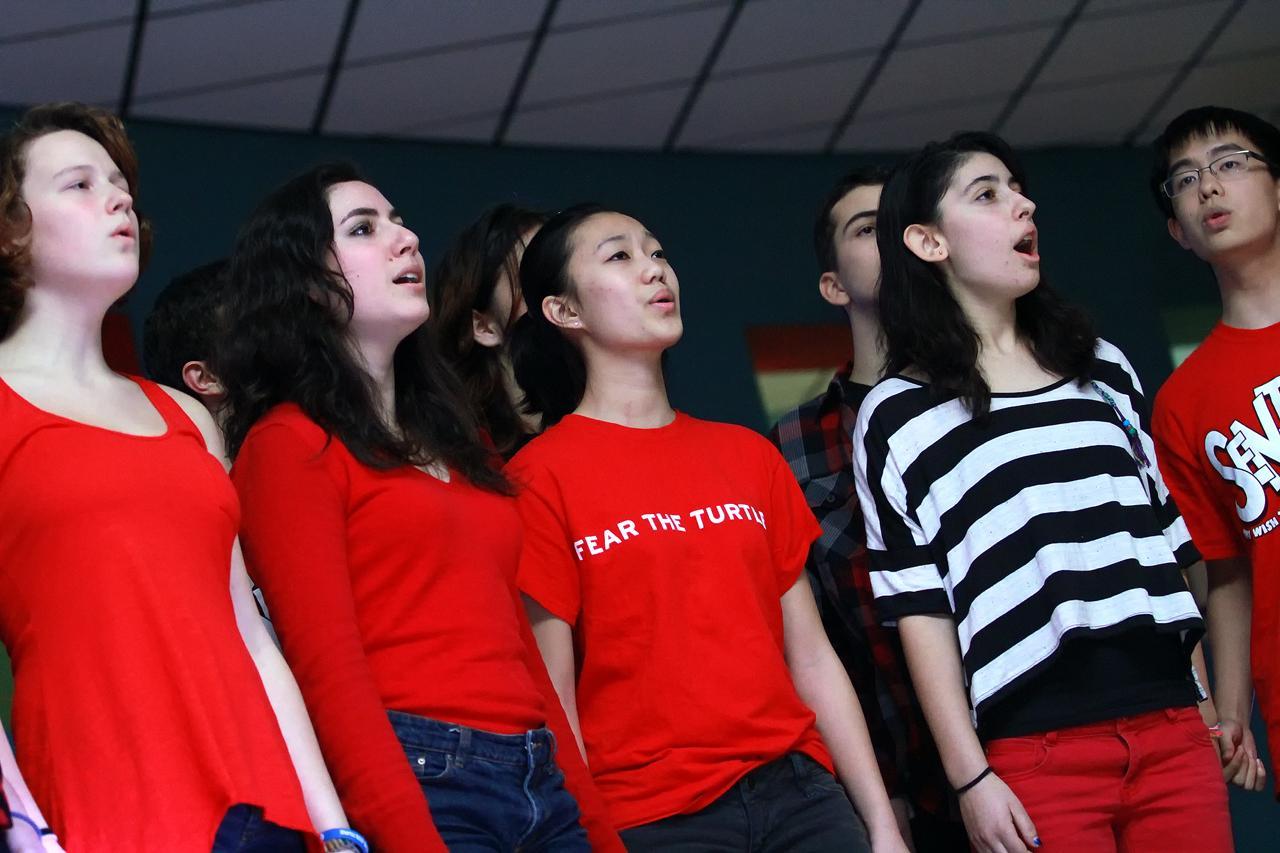 Blair's Students for Global Responsibility (SGR) hosted its annual fundraising event and musical extravaganza, the SGR Spectacular, on Friday. The club raised about $1000 for this year's charity, the Somalian chapter of Doctors Without Borders. Currently, Somalia is experiencing a famine that has aggravated social conditions in an already unstable transitional political system; according to the Voice of America, almost one million Somalian refugees have fled to neighboring countries, notably Ethiopia and Kenya. Doctors Without Borders is one of the few relief organizations that the terrorist group al-Shabbab, allies of al-Qaeda, permits to enter the country and offer humanitarian aid.

Junior Khadija Mohamud, a member of SGR, has a personal relationship to the cause, as both of her parents grew up in the Somalian capital of Mogadishu. "Mothers and children have to walk hundreds of miles to Ethiopia to receive water. It's a miracle if they can get aid," Mohamud said. She added that SGR has been incredibly receptive to a cause that hits so close to home for her. "I love the global responsibility essence of this group, and that members drop their different issues and join together to achieve a common goal," she said. "I feel so loved, so welcome, within this group."

Though technical difficulties and last-minute arrivals disrupted the first half of the Spectacular, knockout performances from the three closing bands left the audience high on adrenaline. Ladle Fight offered an alternative sound in the vein of The Kooks, taking command of the stage with its original songs, "Grace" and "Maryland," the latter accompanied by stellar air stunts from freshman Zeke Wapner. The Revival, though they were missing their lead singer, had a polished showing of soft rock, bluesy acoustics, and The Live Wires eased the volume with its slow and steady ballads, threaded with jazzy solos from a lone saxophone.

Despite the delays in music playback and the disruptive coming and going of audience members throughout the show, the performers remained unfazed. Junior Adam Maisto, sound engineer for the Spectacular, said this year's event was one of the more successful ones, in terms of the set list, turnout and fundraising. "I thought it was great, given the short amount of prep time," he said. "I've been to the event every year, and this was definitely one of the better ones."

The Liz Lerman Dance Exchange kicked off the night with "We Declare," an interpretive dance set to "Norgaard" by the Vaccines. Juniors Alex Hamburger and Emma Rothman followed with an acoustic version of "French Navy" by Camera Obscura and two original songs, "Raindrops" and the snap-happy "Forgetful Friend." The pair, whose songs featured ukele, flute and guitar, brought a charming indie sound to the audience. 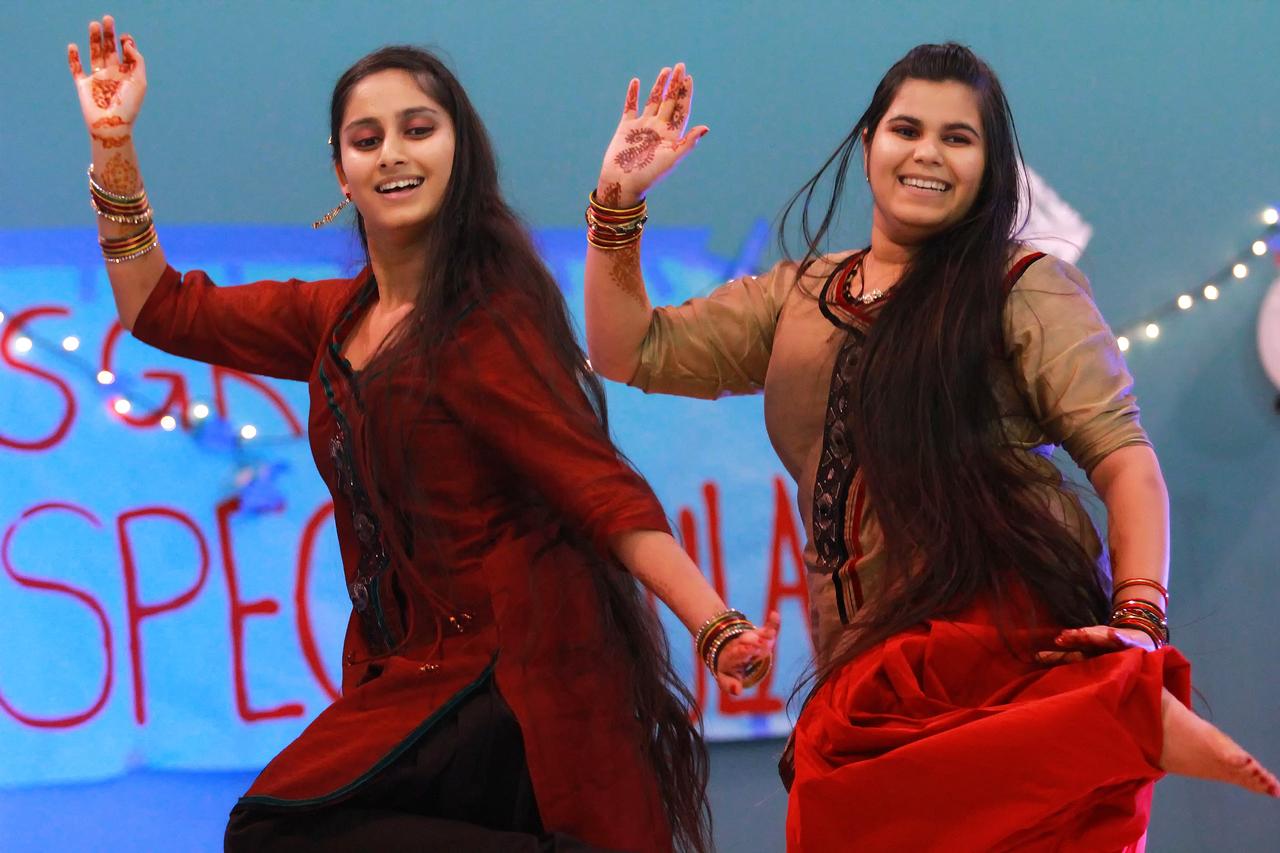 The next act, a quartet of junior girls called KJJB, slowed down the tempo as lead singer Brittany McKinney delivered a soulful rendition of "The Story" by Brandi Carlile and Katerine Contreras. Jennifer Gomez and Jennifer Alvino provided solid backup on guitar. Bringing up the energy, junior Fridien Nana Tchoukoua's dance performance, set to Beyonce's explosive "Countdown," featured a mixture of step, popping and shimmying, along with the classic "Single Ladies" drop to the floor, which garnered cat-calls and whistles from the audience.

The tone remained light-hearted throughout senior Alison Kronstadt's rumination on senioritis in her poem "My Motivation," and her rap to celebrate Blair's diversity. Senior Audrey Yatdon Tchoukoua belted out a magical interpretation of "Can't Help Falling in Love With You" and "Stars," both famous songs from the Broadway musical "Les Miserables," which the Blair Players will present this spring. His silky voice, like something out of a classic Disney movie, kept the audience entranced to the final note.

InToneNation, despite suffering through the graduation of a number of outstanding soloists last year, offered a varied selection, from Rilo Kiley's "Silver Lining," sung with a Florence and The Machine vibe, to "Smooth Operator," Sade's 1992 hit, led by senior Carina Zox. The Bollywood Dance Group, garbed in saris, colorful sashes and bells, performed to an upbeat mash-up of traditional Indian songs, in a dynamic number that gave the ending of "Slumdog Millionaire" a run for its money. Holding up the energy, senior John "JR" Rose collaborated with senior Michael Strautmanis to produce an acoustic version of "Can't Back Down," a song centered on bullying that won Rose an award at the Ghandi Brigade Youth Media Festival last year. The mixture of rap and soft guitar, coupled with a catchy chorus, kept the audience clapping to the beat. 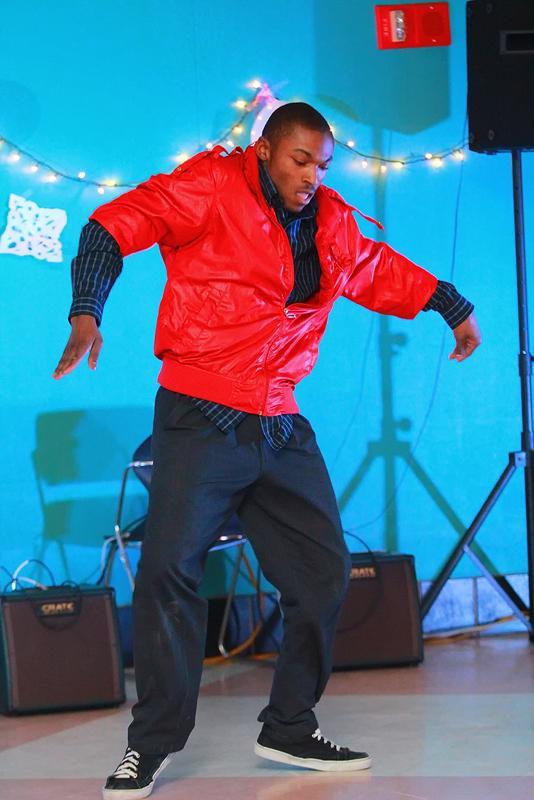 Photo: Senior Savon Young lit up the stage with an electrifying breakdancing routine to "Ice Ice Baby" by Vanilla Ice.

But the highlight of the show's first half came just before intermission, when senior Savon Young pulled out a series of high-speed breakdancing moves, including a top-notch Michael Jackson moonwalk, to the tune of Vanilla Ice's "Ice Ice Baby." Young was a tour-de-force, jumping off the stage to high-five audience members, cart wheeling up the steps again, seizing on the floor and dancing with a microphone stand.

SGR sponsor Kevin Moose, who has helped organize the event for the past seven years, said the relaxed, coffeehouse atmosphere allows him to see students excel outside of the classroom setting. "The Spectacular has a two-fold purpose: first, to have fun and second, to shine light on a global issue. It provides a community, family-based forum for students to show off their skills," he said. "We see a spectrum of talent, and not everyone is as polished, but it [the Spectacular] gives kids who don't often end up in the spotlight a chance to shine."

Moose and Maisto were both pleasantly surprised by the amount of money the event raised. "The parents and kids who contribute to SGR are incredibly generous," Moose said. "Every penny will go toward Doctors Without Borders."