The exterior design for the new Silver Spring library was finalized and presented to the public on Nov. 7. The new 105,000 square foot library, which will start construction in the spring of 2011, will be located on the corner of Wayne and Fenton Streets in Silver Spring, according to county project manager Susanne Churchill. 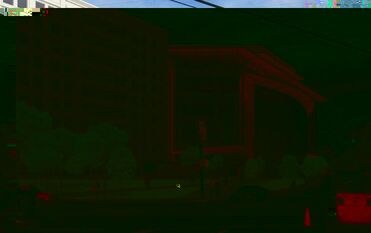 Photo: The new Silver Spring Library will be located on the intersection of Wayne and Fenton in Downtown Silver Spring. Picture courtesy of the Lukmire Partnership.

Photo: The new Silver Spring Library will be located on the intersection of Wayne and Fenton in Downtown Silver Spring. Picture courtesy of the Lukmire Partnership.

The design for the new library, which follows the Department of Public Libraries' "Program of Requirements" guidelines for construction, includes many features. The exterior design, which is part of the schematic design phase of the project, was started in April of this year with the Lukmire Partnership architecture firm. "The purpose was to get [a] big picture of how spaces relate to each other and get ideas of what it will look like," Churchill said.

Achieving a comfortable atmosphere in the design was the architects' top priority, according to Churchill. "There were three to four meetings held for community feedback, and they reiterated the same thought – open, bright and welcoming," she said.

The new building will contain seven floors. The first two will hold an art store, gallery and classrooms. The third, fourth and fifth floors will serve as the main sections of the library; the sixth floor is also designed to be a part of the library if expansion is necessary. On the seventh floor, there will be public meeting rooms.

The library's location will be convenient because it is easily accessed through several forms of transportation. One reason this location was selected is the existing parking garage found across the street, which means that additional parking spaces will not need to be built. "When the site was selected, it was selected because it was so close to the parking lot," Churchill said. In addition, a station for the new Metro Purple Line will be built outside the library. 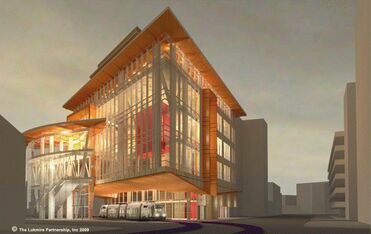 Photo: The library will feature a mainly glass exterior as well as a Metro Purple Line station. Picture courtesy of the Lukmire Partnership.

Photo: The library will feature a mainly glass exterior as well as a Metro Purple Line station. Picture courtesy of the Lukmire Partnership.

The design also includes a potential plan for a pedestrian bridge to connect the library and parking garage on the third level. Currently, the Urban Design Guidelines prohibit the construction of pedestrian bridges over Wayne Avenue. However, the architects are prepared for the chance that the Montgomery County Council will make an exception, according to Churchill. "If the regulation is changed in the future, there will be an opening in the side where the bridge will be able to land," she explained.

In accordance with Montgomery County building requirements, the exterior design is certified as "silver" in the Leadership in Energy and Environmental Design (LEED) rating system created by the U.S. Green Building Council. Designing a "silver" LEED building requires more money in the budget, but it later pays off, according to Churchill. "It costs you a little bit more, but you get it back in energy savings," she said. A major component of the building's LEED design can be found in the glass, which will make up the majority of the exterior. The type of glass used in construction will impact energy costs, Churchill said. Glass, air conditioning and mechanical system selections will be made in the design development phase.

The next steps in terms of construction will involve the demolition of buildings currently on site and rearrangement of the site utilities such as plumbing, according to Churchill. This process is expected to be completed in early spring of 2010, and the library's opening is tentatively set for 2013.

Churchill feels the community will embrace the new library designs. "It's sort of a model for urban development," she said. "I'm very excited for this building."