Welcome to the wonderful world of "Resident Evil: Extinction," where viruses can dry up lakes and rivers, genetic mutations can grant telekinetic powers capable of frying computer chips in satellites thousands of miles away. The third installment of the hack and slash zombie series based on the popular "Resident Evil" video games, "Extinction," like its predecessors, falls into a painfully familiar rehashing that leaves the film as brainless as the zombies in it.

Five years after the events of "Resident Evil: Apocalypse," the T-virus has spread from Raccoon City to the rest of the world despite the efforts of its evil creators, the Umbrella Corporation. With humans on the brink of extinction and zombie hordes roaming the ravaged Earth, the genetically enhanced Alice (Milla Jovovich) joins a band of roaming survivors led by Claire (Ali Larter) and Carlos (Oded Fehr), Alice's former associate. But as the group drags itself across the Nevada desert anxiously searching for provisions from one abandoned area to the next, they are watched by the scheming mad scientist Dr. Isaacs (Ian Glen). An employee of the Umbrella Corporation, Isaacs plans on killing the convoy's members and using Alice's DNA to subdue and "domesticate" the zombies for Umbrella Corp's own nefarious goals. Will the desperate band find its way to the safe haven of Alaska? Will Alice exact her revenge on the Umbrella Corp. and save the human species? 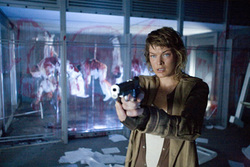 Sure, it sounds like there must be a trace of a story somewhere in there, but those looking for any sort of decent plot will be sorely disappointed. The entire film stumbles along without any real direction until a few brief moments at the end.

The list of expendable characters is staggering. Characters such as Nurse Betty (Ashanti), K-Mart (Spencer Locke) and Wesker (Jason O'Mara) are largely wasted. Other characters from previous installments, including Jill (Sienna Guillory), seem to have simply disappeared without explanation. Of the characters with more than 5 minutes of screen time, nearly every single one is a walking cliche - there is the evil, mad scientist, the superhuman hero, and the noble protagonist who sacrifices himself for others.

The movie is plagued with poor editing as well. Pointless action scenes jump by so quickly they disorient the viewer and detract from an already shabby film experience. The directors also felt the need to constantly shoot close-ups on the inconsistently airbrushed Milla, all the while cuing in blaringly loud "suspenseful" music preceding every horror scene in an cheap attempt to scare the audience.

Other parts of the film just fail to make sense. Hordes of zombies can pour endlessly out of one seemingly small freight container. Alice has gained new telekinetic powers (a convenient effect of genetic mutations, no doubt) but only uses them twice in the movie. And, most of all, how exactly did that ordinary eight foot high fence protect the evil corporation's secret base from thousands of murderous zombies?

All this is to be expected coming from writer and producer Paul W.S. Anderson, known for botching up good original works, who brought forth other derivative abominations such as "Mortal Kombat," "DOA: Dead or Alive" and "Alien vs. Predator."

The only redeeming elements of "Extinction" are Jovovich and the special effects. Although Jovovich's acting leaves much to be desired, simply watching her imaginative ways of dispatching countless zombies, combined with special effects, makes this otherwise dreadful film somewhat bearable.

Despite all its terminal flaws, "Extinction" will most likely have a sequel. It certainly leaves plenty of room for one (or three), with many plot holes to fill and story lines cut short. The ending all but confirms one. "Resident Evil" fans can keep hoping for an installment worth watching, though it seems like a futile exercise.

"Extinction" spews the same recycled garbage found in all zombie horrors. Perhaps viewers who go to watch this movie expecting very little story, originality or logic while tuning out cinematic blunders can extract some kind of enjoyment from it. But what is there really left to enjoy?

"Resident Evil: Extinction" (95 minutes) is rated R for strong horror violence throughout and some nudity, and is now playing in theaters everywhere.