Falcons soar to victory over Blazers

The Blair junior varsity field hockey team (1-4) fought an onerous battle against the Poolesville Falcons Thursday afternoon, struggling valiantly to maintain possession of the ball. A resilient Blair defense thwarted many dangerous advances but could not prevent a potent Poolesville attacking force from hammering three shots into the cage, bringing the final score to 3-0.

Despite the loss, head coach Nina Hagan was impressed with her team's performance. "They had really good tackles, stick skills and passing when we had possession of the ball," she said. "We went at them hard and fast." 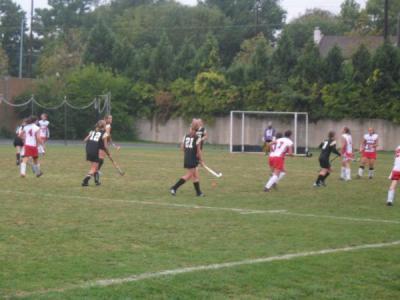 Photo: Blazers hustle back on defense to prevent the Falcons from scoring. Poolesville claimed the win, 3-0.

Photo: Blazers hustle back on defense to prevent the Falcons from scoring. Poolesville claimed the win, 3-0. Photo courtesy of Lauren Kestner.

The Falcons controlled the pace of the game in the opening minutes, connecting a few well-placed passes as they advanced towards the shooting circle. Although the Blair defensive line seemed cohesive and coordinated tight man-to-man marking throughout the game, a disconcerting defensive collapse occurred early in the first half. A ball cleared by a Blair defender was sent right back into the crowded shooting circle, where a tenacious Poolesville attacking squad powered through a clump of defenders to hammer in their first goal.

A similar defensive breakdown enabled the Falcons to score later in the half. The Blazers struggled to clear a ball hit deep in the shooting circle, allowing a Poolesville forward to knock the ball into the cage from close range.

But a calm and collected Blair defensive line swiftly rejected more offensive assaults, clearing the ball away from the cage before ruthless Falcon attackers could pound a shot into the corner. Sophomore Lyla Shapiro tackled Poolesville attackers with unrestrained aggression in the midfield, stealing the ball and distributing it to speedy sophomore co-captain Lauren Rust to fuel offensive advances.

Rust was very complimentary of Blair's performance. "We played strong and energetically," she said. "They're a really good team."

The Blazers' most successful advances came later in the second half, as ball movement and transitions from defense to offense improved. Freshman stand-out Elizabeth Noxon fought aggressively to regain control of the midfield, combining with Rust to evade defenders as they advanced down one side of the field. The Blazers continued to penetrate the Poolesville defense with skillful dodge maneuvers and rapid-fire passes, but could not advance far enough to unleash a threatening shot on goal.

Despite constant defensive improvement over the course of the game, the Blazers could not prevent the Falcons from sneaking in another goal for a 3-0 final score. Like the previous two goals, a crowded, disorderly shooting circle enabled a Falcons player to send a ball crashing into the cage.

Hagan was not greatly concerned with the loss, but cited skills that she felt could be improved. "We played awesome," she said. "But we can work on getting the ball up to the offense."

The Blazers' next home game is Wednesday, Oct. 1 against Bethesda-Chevy Chase at 5:00 p.m.