In the girls' varsity volleyball team's last home game on Tuesday night, the Poolesville Falcons soundly defeated the Blazers (6-7) in a disheartening 3-0 game. The still-undefeated Falcons dominated the court with superior technique and solid, hard serves while the Blazers slipped up in their game and made careless mistakes, resulting in set scores of 25-11, 25-13 and 25-9.

Overall, Blair began strong in the first set, matching the Falcons in serving and skill. The Falcons demonstrated their strong, hard serves that caught the Blazers off guard, but careless Falcon mistakes kept the score close for the beginning of the set. The two teams began rallies but both teams had botched hits that went backwards and out. The Blazers garnered points from the few Falcon serves that flew out of bounds, bringing the score to 7-5 with the home team ahead. 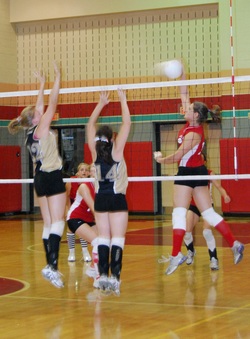 However, the Poolesville team's stepped up and delivered intimidating and strong serves for a 7-0 run, bringing the score to 12-7 in their favor. A quick return from senior libero Amanda Chan, a strong serve from sophomore Elaine Brice and various Falcon mistakes trimmed the Blazer deficit to two, 12-10. But the Blazers lost points steadily, as the defense was unable to cover off tips and establish solid blocks. This weakness, coupled with the superb serves from the Falcons' offense, ended the set with a score of 25-11.

The two teams began rallies that ended because of careless mistakes on the Blazers' part. One of the team's major weaknesses, covering off tips, was exemplified and won points for the Falcons. An ace from co-captain Brice brought the score to 11-9 with the Blazers down by two points, but careless errors continued to plague the Blair team, from stray hits that went backwards into the wall to serves and hits that fell short of the net, ending the set 25-13.

The third set was simply a repeat of the first two, with the Blazers starting strong but quickly losing momentum. The two teams were tied 4-4 after a successful tip on the Blazers' part, but the tie was quickly lost as the Blazers' clumsy serves and hits landed in the net. 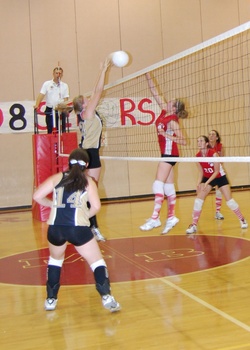 Photo: A Blazer comes back to the ground as a Poolesville player hits the ball back.

Photo: A Blazer comes back to the ground as a Poolesville player hits the ball back. Photo courtesy of Gili Perl.

Junior Caitlin Ludington delivered solid serves, but the Falcons' tight defense received and returned the balls easily – with the Blazers scrambling to reciprocate. Poolesville's aces, along with Blair's clumsy hits into the bleachers and walls, ended the set 25-9.

Many players found the game unsatisfactory. "We definitely weren't awake," said senior co-captain Olivia Bozik, who cited communicating, passing and serve receives as techniques the team faltered on in this game.

Coach Heather Amell was disappointed in the last home game as well. "We didn't play as well as usual," she said, although she recognized the strength of the Poolesville players. "They work together well, and have very good serves," she said.

Still, Amell said, "[Our game] intensity definitely could have been better," also citing the Blazers' shortcomings in passing and blocking.

This was Blair's last home game of the season. The girls' varsity volleyball team plays its next game on Monday, Oct. 29 at 6 p.m. against Wheaton.