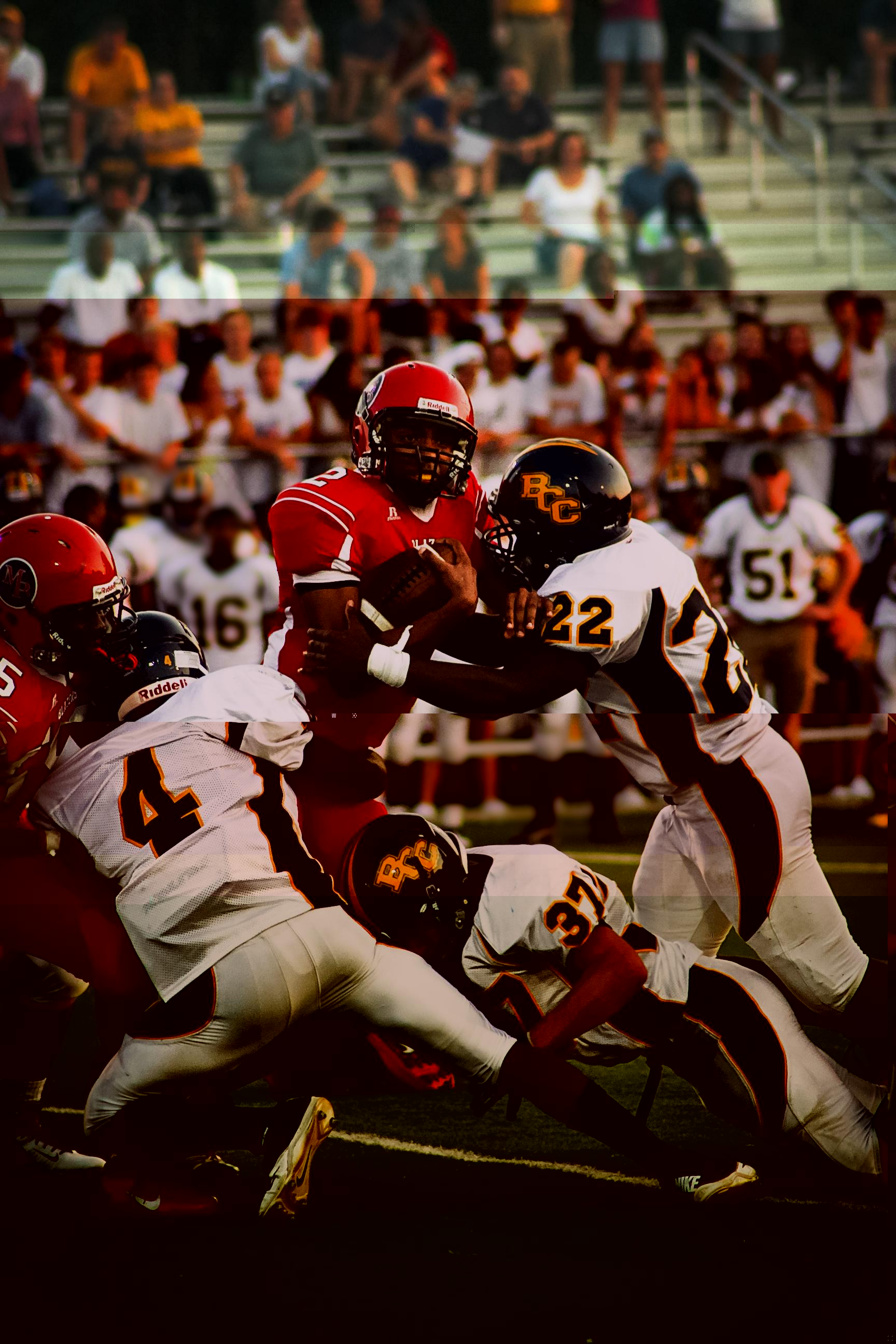 Photo: Blair football started off their season with a 13-2 loss to B-CC.

Photo: Blair football started off their season with a 13-2 loss to B-CC.

Blair's varsity football team is planning on a comeback year with the additions of new coaches, rising junior varsity players and some senior leadership after a winless showing last season. Despite a loss in the team's home opener to B-CC, the team is looking forward to the rest of the season.

Returning head coach Jeffery Seals believes that his team has the potential to put together a good season. "Everybody is working harder and with all of our experience from both varsity and JV, we can definitely bounce back," Seals said.

The team has also added three new coaches to the staff to focus specifically on the offensive line, linebacker and quarterback positions. "Having these new coaches means more one on one time for the players so that they can get more reps and improve," Seals said.

Junior tight end and outside line backer Ernest Ekunseitan pointed out the advantages in practice of having more coaches. "They make for more structured and organized practices and create more order on the team," Ekunseitan said.

Head Coach Seals believes that Ekunseitan, as well as juniors Walter Blanco and Raymond Burtnick and senior Sorel Gossin, are the keys to the team's success. If all goes according to plan, Seals and the team believe they can bounce back from last year's 0-10 season.

Though it was difficult to lose class of 2012's Jamie Kator, one of the top players in Montgomery County, Coach Robert Gibb feels there are many impressive seniors on the team this year. Lisa Bianchini and Cherrah Barclay are players to watch for, as are tough defenders Melissa Romero and Mimi Verdonk.

Junior Sadie Isakower, playing with the varsity team for her third year, will be the starting goalie and another strong asset to the team. "It will be important for her to do well if we are going to go places," Gibb said.

Last season, Blair continued a streak of winning ten or more games for the fifth year and played in the quarterfinals of the playoffs. Based on the new team and their abilities, Gibb believes Blazers can do even better this year. "I am looking forward to seeing continued excellence," he said.

The boys' varsity soccer team, coached by John Haigh, looks to keep the momentum created during last year's eleven win season. Led by captains Simon Amato and Jeffey Martinez, both seniors, the Blazers will have a tough act to follow after last year's team reached the state regional semi-finals.

Though Coach Haigh insists it is too early to make comparisons between last year's team and the current squad, he believes that talent wise, the two teams are very similar. The key to the success of the 2012 team lies in the athletes' teamwork, according to Haigh. "For us to be as successful as last year, our players will have to commit to the team concept," Haigh said.

The Blazers will get a chance early in the season to measure themselves when they take on a nationally ranked Dematha team. In order to have another successful season, the team will need strong performances from standout junior Donald Benamna and experienced senior Stallon Kayaga. The Blazers will also rely on the nine returning players from last year's team to take roles of leadership this year. If all goes according to plan, the team could have another shot at getting to the regional semi-finals, with potential to be even greater than last year.

This year, the team will be lead by captains senior Lizzy Liu and junior Amy Yan. The team is mainly comprised of returning players, most of whom are seniors, with the exception of junior Tatiana Sindass and sophomore Maria Novitskaya, joining from last year's junior varsity team, and freshman Ruby Barreto. Senior Jordyn Schroeder injured her ankle during the preseason, but should be ready to play again next week.

Although the team was disappointed by a loss against B-CC in the playoffs last season, Klein has designed a plan to bounce back this year. "In terms of building from the results of last year, we will do our best each and every practice to improve," Klein said. "Coaches need to build their game plans around the players that they have on the court."

Klein believes that the team's resilient defense could make the Blazers a powerful contender this season. "Our team will be much more balanced this year, less reliant on one player to do the scoring," he said. "We will be less predictable and with the tough, scrappy defense we play, we may very well develop into a dangerous opponent indeed." 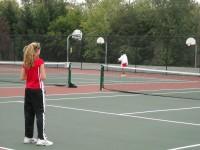 Photo: Allison Whitney is a player to watch on the girls' tennis team this fall.

Photo: Allison Whitney is a player to watch on the girls' tennis team this fall.

Last year, the Blazer's girls' tennis team managed to defeat two other Division I teams, keeping Blair in the county's top division. Coach David Ngbea hopes to replicate that success this season. "My main goal each year is two fold: that we stay in Division I and that everyone improves the basic strokes and leaves Blair a better player, " Ngbea said.

After losing five out of the six doubles players, Ngbea admits that continuing to be a part of Divison I may be more difficult this year, considering doubles play was one of Blair's strong suits in seasons past. "We won many matches with our doubles alone, " Ngbea said.

Despite the challenges ahead, Ngbea is optimistic about this year's team. The players' desire to learn, according to Ngbea, will be the make or break point this season. Dedication and compliance with Ngbea's coaching will be the team's keys to victory. " They have to listen well to advice and at least be able to get into a game without beating themselves," Ngbea said. "If they can do this, we have as good of a chance as anyone else."

Though the team gradated many players last year, there are a number of returners. According to Ngbea, players to look out for include seniors Janvi Raichura and Allison Whitney and sophomores Camilla Arias and Leslie Chen.

This season will mark a fresh start for Blair's varsity field hockey. The team has a new coach this year, Candace Thurman, who coached for twenty-four years at Walter Johnson High School and five years at The Academy of the Holy Cross.

The team is led by four senior captains, Alayna Abel, Jenny Beech, Mattie Cohen and Zoe McCarthy. Though half of the players are new to the team, there are six returning seniors and six returning juniors. Thurman pointed out that McCarthy is a player to watch for, not only for her skill on the field, but also because of the strong leadership she brings to the team. Thurman also mentioned Cohen, a captain and one of three goalies, as a strong player. "I am loaded with goalies, which is good," Thurman said.

The team had a record of 4-9 last year but has several strategies for improving this year. By putting a higher emphasis on fitness and by implementing more rigorous drills during practice, Thurman believes she will be able to improve the team's chances of competing down the stretch. She hopes to have a winning record and would like the team to go as far as regionals, but understands that it will be a challenge. "It takes a couple years to build a program," Thurman said.

McCarthy said that last year was not the team's best season, particularly when it came to teamwork. This year, she is confident that the team has more potential. "We're going to work together and support each other. We all want to win," McCarthy said. 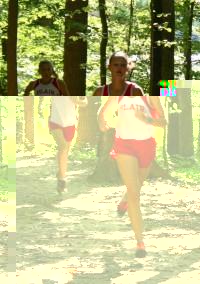 Photo: Junior Morgana D'Ottavi has been one of Blair's strongest runners since her freshmen year.

Photo: Junior Morgana D'Ottavi has been one of Blair's strongest runners since her freshmen year.

Blair's cross country team is hoping to improve and build on the successes of years past in this season's match-ups. The girls' varsity team in particular showed an impressive performance last year, placing fourth at regionals and 12th at states after a 5-0 regular season record. Junior co-captain Morgana D'Ottavi hopes to see even better results than last year. "I would like to see us go to states as a team again and come in the top ten teams at the state meet," D'Ottavi said.

Despite graduating more than 20 runners in the class of 2012, there are plenty of promising new athletes to take their place. Senior co-captain Michael Ekstrom believes there are many talented freshmen who are passionate about the sport and will be a great addition to the team. According to Ekstrom, freshman Alex Mangiafico is a runner to watch, placing first at the recent Sandy Spring time trials. In addition to the new runners, many returning athletes have improved since last year. According to D'Ottavi, junior Lily Durkee and sophomore Natalie Gradwhol are returning runners with the potential to leave a mark this season.

Despite the loss of many seniors last year, D'Ottavi is confident the team will do well in upcoming meets, based on the talent of the girls' team and the dedication of the boys. "For the girls, we have a lot of really fast sophomores and juniors, so even though we lost some good seniors, I think we're still going to be a strong team," D'Ottavi said. "The boys lost their best runners last year, but I think all the hard work they've been putting in over the summer is really going to pay off later on in the season." With much motivation, new talent and confidence, the cross country team is looking forward to a successful season.