Predictable premieres are the norm for most season series

As the temperature gradually downgrades into mild and chilly weather, TV remotes will hit a fever pitch as audiences start hitting the couch to watch new shows this season. Network cable stations have noticeably inserted more comedies in primetime slots, while regular TV will stick to dramas. NBC's "The Jay Leno Show" will be the only comedy show during 10 p.m., a time slot other large networks will reserve for their dramas. Network executives have also been fairly conservative this season, avoiding pet project productions or abnormal plot lines. For now, Silver Chips Online provides a brisk preview of this season's fare, be it promising, mediocre or just plain bad. 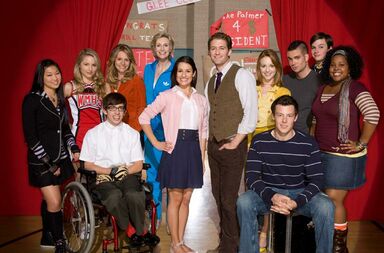 Fox's new one-hour comedy "Glee" revolves around Will Schuester (Matthew Morrison), an eager and determined teacher who endeavors to revive McKinly High School's Glee Club from namelessness, despite opposition from malignant cheerleading coach Sue Sylvester (Jane Lynch). Schuester supports this group of ambitious underdogs to help them reach their full potential. But it's not neccesarily a breeze when the group includes diverse and opinionated stars, such as Arties (Kevin McHale), a nerdy guitarist who excels in rock and roll or Mercedes (Amber Riley), a Mariah Carey-type diva with the pipes to match. With a dogged pursuit in making "Glee" show-stopping , Schuester must deal with doubters, including his wife Terri Schuester (Jessalyn Gilsig), and his one supporter - fellow collegaue and resident germaphobe Emma Pillsbury (Jayma Mays). The soundtrack for the series is sure to impress and boasts many hits ranging from oldies to newbies. Let's hope "Glee" can inspire its audience as much as its name. Next episode premieres Wednesday, Sept. 23 at 9 p.m.

Mercy
Medical dramas such as "Grey's Anatomy" and "E.R." are common major network material, but NBC is spinning its new drama "Mercy" from a different angle: the story is told from the vantage of nurses, rather than doctors. Nurse Veronica Callahan (Taylor Schilling) just returned from tour duty in Iraq and knows more about medicine than the Mercy Hosptial staff. Along with nurses Sonia Jimenez (Jamie Lee Kirchner) and Chloe Payne (Michelle Trachtenberg), the ladies deal with non-stop medical emergencies and social strife, managing love and daily personal affairs from inside and outside the hospital doors. Premieres Wednesday, Sept. 23 at 8 p.m.

A rare concept can be found in Fox's newest animated series starring a black family dealing with neighbors and drama. Many months ago, Cleveland Brown, from Fox's "Family Guy," fell into unrequited love with a belle named Donna. Although Brown promised her that he would always love her, she married another man. Flash forward to the present. Cleveland moves to his hometown in Virginia with his teenage son Cleveland Jr. In Virginia, he meets Donna, who is now open to a relationship after her husband abandoned her with a teenage daughter and son. Making good with his promise, Cleveland happily unites with Donna, and both work on raising rebellious and hormonal children, while living amongst dynamic neighbors like Lester, a boisterous redneck. The semi-original plot should be enough to sustain a large following for the animated tale. Premieres Sunday, Sept. 27 at 8:30 p.m.

Jay Leno Show
When Jay Leno relinquished his throne at "The Tonight Show" to Conan O'Brien, he was no longer the King of Late Night. However, his popularity gave him the opportunity to continue his talk show routine for at least four more years. "The Jay Leno Show" is almost an exact replica of "The Tonight Show with Jay Leno." The show begins with a monologue that consists of 12 minutes, then proceeds to interviews of celebrity guests. Premieres Monday, Sept. 14 at 10:00 p.m. on NBC.

Cougar Town
The creator of the hit TV classic "Scrubs," Bill Lawrence revives his comedic flare with this new show about a romantically challenged middle-aged woman. The show is about Jules Cobb (Courtney Cox), a recently divorced 40-year-old mother who decides to get back into the risky world of dating. The comedic timing of Cox strikes a chord with any comedic enthusiast and the sardonic writing will make viewers feel that "Scrubs" was never canceled. A situational comedy with top notch actors and writers, "Cougar Town"is sure to bring gold back to ABC this fall. Premieres Sunday, Sept. 27 at 8:30 p.m. on ABC.

Photo: Instead of focusing on doctors or nurses, "Trauma" focuses on those who transport. Picture courtesy of NBC.

Photo: Instead of focusing on doctors or nurses, "Trauma" focuses on those who transport. Picture courtesy of NBC.

Premiering on NBC is a new medical drama that looks at trauma responders and transporters. Instead of focusing on doctors or nurses, "Trauma" focuses on those who transport. The thrilling new series about San Francisco paramedics brings newly discovered adrenaline into the genre of medical dramas. The team of paramedics led by Reuben Palchuck (Cliff Curtis) must face the intense problems of trauma accidents , as well as problems within their personal lives. The sheer excitement of the show is bogged down by its obvious fall from reality. Though there's pulsing action, viewers will likely ignore this exaggerated drama. Premieres Monday, Sept. 28 at 9 p.m. on NBC.

Vampire Diaries
In the era of teenage vampire heartthrobs, TV desires to leave its fanged mark on the genre. "Vampire Diaries" is the story of Elena Gilbert (Nina Dobrev), a teenage girl who is in the middle of a vampire love triangle. Two vampires, one good and one evil, are at war for Gilbert's heart and soul, and neither will give up. Based on the series of novels that started America's vampire obsession, "The Vampire Diaries" entangles a well-written tale with engrossing characters. This show has bite. Second episode will air Thursday, Sept. 27 at 8 p.m. on CW.

Community
Original shows are hard to come by these days. However, when the idea of a comedy set in the average halls of a community college comes to mind, no one can call that a cliché. The show is about Jeff Winger (Joel McHale), a former lawyer whose college degree was deemed invalid. Now, he is is forced to regain his degree at a community college. What ensues is dynamic comedy and one of the most anticipated new series of the fall season. With a cast of Chevy Chase, Joel McHale and Ken Jeong, "Community" is a surefire hit. Premieres Thursday, Sept. 17 at 9:30 p.m. on NBC.


Amir Gorjifard. Son of Mahmoud Gorjifard and Nahid Gorjifard, Amir can be best described by two words: gorgeous and modest. His two loves in this world are his two guitars - his acoustic guitar, E. Roosevelt (he was forced to add the E. due to an overrated … More »