The administration held a farewell party on June 12 for Principal Phillip Gainous, celebrating his 23-year tenure at the helm of Blair, which will formally end on July 1. The party, planned by a committee of staff and parents and open to all who wished to attend, was held from 4:30 p.m. to 7 p.m. and followed by a special presentation in the auditorium. 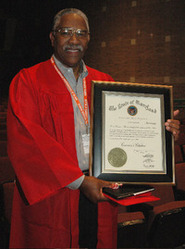 Photo: Gainous, who formally left Blair on July 1 after announcing his likely retirement on April 30, was made an honorary alumnus. Photo courtesy of Dave Ottalini

Photo: Gainous, who formally left Blair on July 1 after announcing his likely retirement on April 30, was made an honorary alumnus. Photo courtesy of Dave Ottalini

The presentation included performances by Blair clubs, including the Bollywood club, InToneNation and the Chamber Choir. The evening was highlighted by a group of teachers from the Instructional Leadership Team (ILT) who formed a washboard band and parodied a song called "I'm Going Fishing" with words appropriate to Gainous.

Despite heavy rains that evening, Blair's 750-seat auditorium was half-full, according to Ottalini. Though he was disappointed that more parents didn't attend, Ottalini said that the evening went well and gave Gainous a true goodbye. "It was just wonderful. It was personal, it was human, it was touching," he said. "Mr. Gainous got up at the end and spoke and it was emotional. It was a fond farewell."